Benito Juárez was a Mexican statesman and four-time president of Mexico. After resisting takeover by European powers, Juárez installed numerous social changes that would improve the lives of the Mexican people.

Benito Juárez was born in the small Zapotec Indian village of San Pablo Guelatao, Oaxaca, Mexico, on March 21, 1806. His parents, who were poor peasants, died when he was three years old. Juárez then lived with his grandparents and later with an uncle. He worked with his uncle until he was thirteen. Then he walked forty miles to the city of Oaxaca, Mexico, to move in with his sister. At the time he could not yet speak Spanish (he spoke the language used in the Oaxaca tribe).

In Oaxaca, Juárez worked with Don Antonio Salanueva, a bookbinder, who basically adopted him. Helped by Salanueva and a local teacher, Juárez eventually learned to read and write. In 1827 he graduated from the Seminary of Santa Cruz, but later changed career paths and decided to study law. In 1831 he qualified to enter a local law office, but as the legal profession was already overcrowded, he began a second career as an antiestablishment Liberal politician with goals to change the Mexican government.

In 1831 Juárez entered politics as an official on the Oaxacan town council. In 1835 the city elected him as a Liberal deputy to the federal legislature. He carried forward his legal career, often serving as a representative of the severely poor Indian communities in their struggles to protect their landholdings. Honest and intelligent, he became one of Oaxaca's leading lawyers.

By this time, Mexico seemed on the verge of total collapse. Thirty years of violence had left the treasury bankrupt, communications disrupted, and the population unconfident. Two factions (rival groups creating conflict), defining themselves as Conservatives and Liberals, constantly fought to control Mexico. The Conservatives, represented large landholders, the Church, the army, and the large cities. The Liberals, who represented small merchants, some intellectuals, political leaders in rural areas, and the small ranchers of the west and south, wanted to modernize Mexico.

During the Conservative domination of Mexico between 1836 and 1846, Juárez largely avoided elective office but often accepted professional and political appointments from the Conservative state authorities. In 1841 the state government appointed him a federal court judge, a post in which he served with excellence. His local standing had increased through his marriage to Margarita Mazza, the daughter of one of Oaxaca's wealthiest families.

In 1846 the Liberal party, led by former president Valentín Gómez Farías, took power throughout Mexico and Juárez returned to the Liberal faction. In 1847 and 1848, during Mexico's war with the United States over land in America's Southwest, he became Oaxaca's acting governor and then elected governor.

Juárez reduced corruption and built roads, public buildings, and schools. He reorganized the state national guard, and when he left office in 1852, the economy of Oaxaca was in good standing. His state government became renowned throughout Mexico for its honesty, public spirit, and constructiveness. He also served as a lawyer, often helping the poor.

In 1853 the Conservative party, led by the brilliant Lucas Alamán (1792–1853), seized power by a barracks coup, or hostile takeover. One of the revolt's leaders was Antonio López de Santa Ana (1794–1876), the corrupt general who had frequently dominated Mexico during the previous twenty years. Seeking to strengthen his power, Santa Ana immediately exiled (forced to leave) the leaders of the Liberal party, including Juárez. 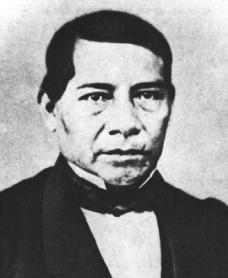 In Mexico, Santa Ana had run the country into further bankruptcy (complete financial ruin). Liberals launched a revolt and Santa Ana's government collapsed with little fighting. The Liberals again assumed power with Juan Álvarez as president. But the voluntary retirement of Álvarez in 1857 ended the Liberal hopes for a peaceful transformation of Mexico. The following period, known as the Three Year War (1857–60), proved to be one of the most bloody and wasteful in Mexican history.

The only positive result of these years was the emergence of Juárez as the undisputed leader of the Liberal party. At the same time, the Conservatives had named one of their own the president of Mexico and sent their troops northward to crush Liberal resistance. Through the conflict, Juárez fled to Veracruz, Mexico. Three years later, the reorganized Liberal armies under Santos Degollado, Porfirio Díaz, and Jesús González Ortega took Mexico City. The Conservative armies fell apart, and their leaders went into exile. In 1860 the Mexican people elected Juárez president.

Juárez was determined to carry out national reconstruction, but he had staggering problems. The government, seeking to develop a large agrarian middle class, or a class of farm workers, tried to distribute the lands to those working them. However, the Liberals needed money to pay the army and the national debt. Pressed for funds, public officials allowed these lands to go to those who could pay for them immediately, mostly rich land developers and foreign investors.

On the verge of economic collapse, Mexico was at the mercy of foreign nations, in particular England, France, and Spain. The English and Spanish soon withdrew, but the French emperor, Louis Napoleon (1808–1873), attempted to establish a Mexican empire under the Austrian archduke Maximilian (1832–1867). Aided by small Conservative forces, the French took Mexico City in 1863. Once again, Juárez was forced to flee.

End of his career

The years between 1864 and 1867 determined the future of Mexico and the Liberal reforms. Juárez refused to serve in an imperial cabinet, a body of advisors under control of a foreign empire. The imperialists controlled the cities, but the countryside remained in a state of revolt. Faced with mounting costs in men and money and the rise of Prussia, which was part of the German empire, the French withdrew from Mexico.

Juárez accomplished much in the remaining four years of his life. The government began to build railroads and schools, the military budget was cut, and the Church was stripped of its large landholdings. Most important, Mexico had its first effective government, based upon the Constitution of 1857, which guaranteed free speech, free press, right of assembly (right to organize), and the abolishment of special legal privileges.

On the negative side, Juárez refused to distribute authority and insisted, despite much opposition, upon his own reelection in 1871. He sincerely believed that he alone could govern Mexico, but many now saw him as a dictator, or an absolute ruler. Furthermore, he had failed to rid the country of internal tariffs (taxes) or to reduce large independent landholdings. In 1871 his army crushed the revolt of Porfirio Díaz, but the Liberal party had split into factions. On July 18, 1872, the president suffered from a stroke and died at his desk.

Juárez had many failings, but he was one of the greatest Mexican executives. He fought for and established a liberal constitution and stubbornly saved the country from foreign domination, although he did little to help the rural proletariat, or working class.

I LOVE Benito Juarez. He is seriously one of my mentors. If I could spend one day with him my life would be complete. Everything he did for Mexico is astounding and it makes me feel good about myself. My very close friend Thomas agrees with me because we are two pees in a pod. I LOVE BENITO JUAREZ!
2
Brian Belair

This article says that Juarez died of a stroke, while all other articles that I've seen say that he died of a heart attack.