The Czech-born German novelist and short-story writer Franz Kafka presented man's experience of total isolation or separation from the environment around him. In his works man finds himself in a maze that he will never understand.

Franz Kafka was born on July 3, 1883, the eldest of six children of a middle-class merchant. He grew up as a member of a minority (the Jewish community) within a minority (the German-speaking population) at a time when there was little or no communication between the two groups or with the mainly Czech-speaking citizens of Prague. Even though Kafka acquired a thorough knowledge of Czech and a deep understanding of its literature early in his life, he was not accepted. This alienation (the state of being rejected or turned away) was reflected in his writing, most notably in the protagonists (main characters) of his stories, who were for the most part outcasts constantly asking, 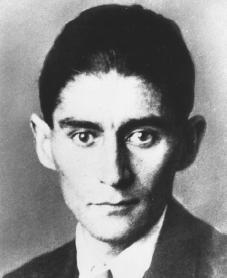 Franz Kafka.
Reproduced by permission of
AP/Wide World Photos
.
"Where do I belong?" or "Where does man belong?"

An even greater source of frustration for Kafka was his domineering father, a successful businessman who was a powerful, imposing (impressive) man. Conflict with his father overshadowed Kafka's childhood and youth. It was from his mother that he inherited his sensitive and dreamy qualities. In his literary works, Kafka transformed this total lack of communication into the relationship between authority figures and man.

Even as a youngster Kafka must have wanted to write. For his parents' birthdays he would compose little plays, which were performed at home by his three younger sisters, while he himself acted as stage manager. He was also an avid reader. Kafka attended a German grammar school from 1893 to 1901, and the Karl Ferdinand University of Prague from 1901 to 1906. He started out studying German literature but changed to the study of law in his second semester. In June 1906 he graduated with a degree of doctor of jurisprudence (the science of law).

In October 1906 Kafka began his practice of law. In early 1908 he joined the staff of the Workmen's Compensation Division of the Austrian government, a post he held until his retirement for reasons of ill health in July 1922. Here he came to know the suffering of the underprivileged workmen and wrote his first published works, "Conversation with a Beggar" and "Conversation with a Drunkard," which were published in 1909. Kafka's first collection of stories was published in 1913 under the title Contemplation. These sketches are polished, light impressions based on observations of life in and around Prague.

In September 1912 Kafka composed the story "The Verdict" in a single night. The story contains all the elements normally associated with Kafka's world, the most disorderly universe ever presented by a major artist. In "The Verdict" a bedridden authoritarian (domineering) father passes judgment on his conscientious (highly principled) but guilt-haunted son. His next work, completed in May 1913, was the story "The Stoker," later incorporated in his novel Amerika and awarded the Fontane Prize in 1915, his first public recognition.

The year 1913 saw the publication of Kafka's best-known story, The Metamorphosis. For the reader Kafka creates a world of psychotic delusion (absurd and extreme mental perception not based on reality) by means of an outrageous event: "When Gregor Samsa woke one morning from restless dreams, he found himself transformed in his bed into a monstrous insect." In spite of Gregor's gallant efforts to master his new situation, he dies.

In 1914 Kafka published a novella (short novel), In the Penal Colony. Several stories were published in 1919 in a collection dedicated to his father and entitled The Country Doctor. His story "The Hunger Artist" was published the following year, and a collection of four stories was published in 1923. Again, as in The Metamorphosis, it is the outsiders (outcasts of society), however sensitive and gifted, who fall into psychotic delusions—not the healthy realists, who always seem to survive the struggle for existence.

One of Kafka's most important writings is the one-hundred-page letter to his father. Written in November 1919, it is an attempt to explain his conscience (one's own ideals and sense of wrong or right) to his father and to declare his final independence from his father's authority.

Kafka's three great novel fragments, Amerika, The Trial, and The Castle, might have been lost to the world altogether had it not been for the courage of his friend Max Brod (1884–1968). Editing them after Kafka's death, Brod ignored his friend's request to destroy all of his unpublished manuscripts.

In The Trial, published in 1925, a man is arrested and convicted by a mysterious court. He tries to learn the nature of the guilt he feels, and the nature of the court, but he fails. He dies in ignorance. The Castle, published in 1926, presents a newcomer's futile (having no useful result) struggle to win acceptance and enter a castle in which an unknown supreme authority resides. Amerika is about the adventures of a teenage European immigrant in America.

During the years 1920 to 1922, Kafka's health was badly threatened, and he was forced to take sick leave. Kafka left Prague at the end of July 1923 and moved to Berlin-Steglitz, where he wrote his last, comparatively happy story, "The Little Woman." He returned to Prague three months before his death on June 3, 1924.

Franz Kafka is regarded as one of the major literary figures of the twentieth century. His works present a world that is both realistic and dreamlike. Individuals in it struggle with guilt, isolation, and fear. Kafka once said that all of his stories were intended to convey the message that "the incomprehensible [that which cannot be understood by the intellect] cannot be comprehended."