Lena Horne is known as one of the most popular African American entertainers of the twentieth century. A woman of great beauty and commanding stage presence, she performed in nightclubs, concert halls, movies, and on radio and television.

Lena Horne was born in Brooklyn, New York, on June 30, 1917. Her father, Edwin "Teddy" Horne, who worked in the gambling trade, left the family when Lena was three. Her mother, Edna, was an actress with an African American theater troupe and traveled extensively. Horne was mainly raised by her grandparents, Cora Calhoun and Edwin Horne. Yet, she still moved a great deal in her early years because her mother often took her with her on the road. They lived in various parts of the South before Horne was returned to her grandparents' home in 1931. After they died, Horne lived with a friend of her mother's, Laura Rollock. Shortly thereafter Edna remarried and Horne moved in with her mother and her mother's new husband. The constant moving resulted in Lena having an education that was often interrupted. She attended various small-town, segregated (separated by race) school's when in the South with her mother. In Brooklyn she attended the Ethical Cultural School, the Girls High School, and a secretarial school.

From an early age Horne had ambitions of becoming a performer—much against the wishes of her family, who felt she should have higher goals. The Hornes were an established middle class family, with several members holding college degrees and distinguished positions in organizations such as the National Association for the Advancement of Colored People (NAACP) and the Urban League (a group that worked to increase the economic and political power of minorities and to end discrimination based on race). Nonetheless, Horne pursued her own course and at age sixteen was hired to dance in the chorus at Harlem's famed Cotton Club. In 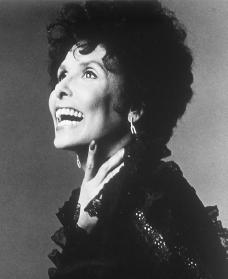 Lena Horne.
Reproduced by permission of
Schomburg Center for Research
.
1934 Lena took voice lessons, and she also landed a small role in an all-black Broadway show Dance with Your Gods. In 1935 she became the featured singer with the Noble Sissle Society Orchestra, which performed at many first-rate hotel ballrooms and nightclubs. She left Sissle in 1936 to perform as a "single" in a variety of New York City clubs.

Experiences unequal treatment because of race

In 1937 Horne married minor politician Louis Jones, by whom she had a daughter, Gail, and a son, Edwin (they separated in 1940 and divorced in 1944). She gained some early stage experience in Lew Leslie's revues, Blackbirds of 1939 and Blackbirds of 1940, and in 1940 she joined one of the great white swing bands, the Charlie Barnet Orchestra. But as the group's only black member she suffered many humiliations of racial prejudice, especially from hotels and restaurants that catered exclusively to whites.

Horne left Barnet in 1941. Her career received an immediate boost from entertainment manager John Hammond, who got her a long engagement at the famous Cafe Society Downtown, a club in New York City. It was at the Cafe Society that Horne learned about African American history, politics, and culture and developed a new appreciation of her heritage. She rekindled her acquaintance with Paul Robeson (1898–1976), whom she had known as a child. Horne's conversations with Robeson made her realize that the African American people were going to unify and make their situations in life better. She felt she needed to be a part of that movement. From that point onward, Horne became a significant voice in the struggle for equality and justice for African Americans in the United States.

In 1943 a long booking at the SavoyPlaza Hotel, which brought Horne national coverage and a number of movie appearances, established her as the highest-paid African American entertainer in the United States. She was signed to a seven-year contract with the movie studio Metro Goldwyn Mayer (MGM)—the first African American woman since 1915 to sign a term contract with a film studio. She was not dark enough in color to star with many of the African American actors of the day and her roles in white films were limited, since Hollywood was not ready to portray interracial relationships on screen.

Horne, despite her great fame, continued to experience humiliating racial discrimination (wrongful treatment because of race), and in the late 1940s she sued a number of restaurants and theaters for race discrimination and also began working with Paul Robeson in the Progressive Citizens of America, a political group opposing racism. During World War II (1939–45; a war in which Germany, Italy, and Japan fought against France, Great Britain, China, the Soviet Union, and the United States), she used her own money to travel and entertain the troops. She also assisted Eleanor Roosevelt (1884–1962) in her mission for antilynching legislation (laws making it illegal to hang a person accused of a crime without a trial). After the war Horne worked on behalf of Japanese Americans who faced discrimination.

In 1947 she married a white bandleader, Lennie Hayton, a marriage that was kept secret for three years because of racial pressures. Until his death in 1971, Hayton was also her pianist, arranger, conductor, and manager.

In the mid-1950s Horne made a movie appearance in Meet Me in Las Vegas (1956) and recorded for the first time in five years. In 1957 she drew record crowds to the Empire Room of the Waldorf-Astoria, and in 1958 and 1959 she starred in a Broadway musical, Jamaica.

During the 1960s Horne was involved in the American Civil Rights Movement. She participated in the March on Washington in 1963, performed at rallies in the South and elsewhere, and worked on behalf of the National Council for Negro Women. During the same period, she was also very visible on television, appearing on popular variety shows and in her own special, Lena in Concert, in 1969. In 1969 Horne starred in the movie Death of a Gunfighter.

Lennie Hayton's death in 1971, which followed the deaths of Horne's father and her son, plunged her into a state of depression from which she emerged seemingly more determined than ever. In 1973 and 1974 she toured England and the United States with Tony Bennett (1926–), and in 1979 she was billed with composer Marvin Hamlisch at the Westbury (New York) Music Fair.

In 1981 Horne had her greatest triumph, a Broadway show called Lena Horne: The Lady and Her Music, which was the talk of show business for fourteen months. It won a special Tony award, and the soundtrack won two Grammy awards.

In the 1990s Horne cut back on performing. She was drawn back from semiretirement to do a tribute concert for a long-time friend, composer Billy Strayhorn, at the JVC Jazz Festival. At age seventy-six she released her first album in a decade, We'll Be Together Again. In 1997, on the occasion of her eightieth birthday, Horne was honored at the JVC Jazz Festival with a tribute concert and the Ella Award for Lifetime Achievement in Vocal Artistry. In 1999 she was honored at the New York City's Avery Fisher Hall with an all-star salute.

Lena Horne is an amazing woman. Her pride in her heritage, her refusal to compromise herself, and her innate elegance, grace, and dignity has made her a legendary figure. Her role as a person who has helped to improve the status of African Americans in the performing arts has provided a permanent legacy.

This is a great article, but I would like for them to add more detail in to what is happening with her life, now. She is close to 90 years old, you, think and she is still looking beautiful as ever. How is her daughter, Gail? Are they living together? I am pretty sure she is close knit with Gail and her grandchildren. I would love to see the day where I can actually meet and greet Ms. Horne. She is a true legend of all kind. No substitutions whatsoever.
2
Chariss

Lena Horn's Great Grandparents, Sini and Henry Reynolds, were brought to Newnan Georgia by Silas Reynolds. A man from Maryland who moved to North Carolina and then to Georgia. They were slaves on the Dr A B Calhoun plantation. Her ancestral plantation was where they just put the new Coweta County Justice Center in downtown Newnan GA.
3
Christopher P. Maghee

I have been in love with "Lena Horn", since I was twelve years old, after I saw the movie "Stormy Weather", and for the next twelve years, most of my girl friends had to look a little bit like her.
4
alice

i like the page because it has a bunch of things that i didnt know. . .
5
Mary Norwood

I am a 51 yr old woman that grew up watching the wonderful old movies. I watched the
TODAY's show for the end of the 2010 year and they went back to show who we lost in 2010. I
saw Lena Horne. I cried because we have lost another amazing person of character and beauty.
I read a part on the internet that she was blackballed in the 50's for her political views...
I remember seeing her on the TV and how she had so much CLASS. I saw her on Sanford and Son
in the 80's and it was like she never aged. This generation does not have the quality of
intertainmnet as then and the honesty that they brought to the screen. I WILL MISS YOU LENA...
ANOTHER LEGEND ALWAYS REMEMBERED IN MY HEART.
6
Iris T.

I am really happy I found this because I just learned about someone.I had to look up a famous jazz singer or musician for a project i had to do and who ever wrote this is really good.I had heard of her music but not yet her.Now I have leaned about her also.And the auther of this is gonna go along way.