Actor Anthony Hopkins worked on stage and in film for over thirty years before receiving his first Academy Award for his performance in The Silence of the Lambs.

Anthony Hopkins was born in Port Talbot, Wales, on December 31, 1937, the only child of Richard Hopkins, a baker, and his wife Muriel. Hopkins had a difficult childhood; he often felt isolated and lonely. Although he studied piano and could draw well, Hopkins did not excel at Cowbridge Grammar School. The famous actor and fellow Port Talbot native Richard Burton (1925–1984) inspired Hopkins. At the age of fifteen, after getting Burton's autograph, Hopkins decided he wanted to be famous.

Hopkins dropped out of school at age seventeen and enrolled in a drama class at a local YMCA. Skilled at the piano, he earned a scholarship to the Cardiff College of Music and Drama, where he studied for two years. After two years of military service, Hopkins worked in theater. In 1961 he received a scholarship to the Royal Academy of Dramatic Art in London, England. After graduating in 1963, Hopkins worked at several different theaters before applying to the famous National Theatre in 1965. He was invited to join the company and remained a member until 1973.

As Hopkins's stage and film career began to take off in the 1960s, he became known for his temper—he walked out in the middle of a National Theatre performance of Macbeth —and his excessive drinking. Hopkins married actress Petronella Barker in 1967, but by the time their daughter Abigail was eighteen months old, the couple had split. In 1973 Hopkins married Jennifer Lynton, a film production assistant. In 1974 they moved to New York City, where Hopkins appeared in the Broadway production of Equus, once stopping a performance to yell at late-arriving audience members. Hopkins, who continued to drink heavily, then moved to Hollywood, California. After waking up one day in a hotel room in Arizona with no idea how he got there, he quit drinking in 1975.

Hopkins began to accept whatever acting jobs he was offered. From 1975 to 1985 he appeared in over twenty-five movies made for either television or theatrical release. Although he earned two Emmy Awards (in 1976 and 1981), most of the movies he made during this time period, including Audrey Rose (1977), International Velvet (1978), and A Change of Seasons (1980), were less than memorable. In 1985 Hopkins moved back to London and returned to the stage. Over a seventeen-month period he appeared in two hundred performances of two different William Shakespeare (1564–1616) plays. In 1988 he received an honorary (achieved without meeting the usual requirements) degree of Doctor of Letters from the University of Wales. In 1993 he was knighted.

In 1991 Hopkins earned an Academy Award for best actor in The Silence of the Lambs. He played Dr. Hannibal "The Cannibal" Lecter, a killer known for eating his victims. Although he appeared in only twenty-seven minutes of the movie, this role finally made Hopkins a superstar. After The Silence of the Lambs, he acted in four films released in 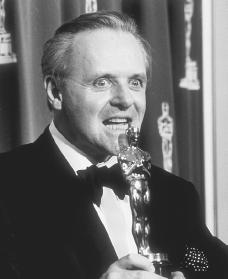 Anthony Hopkins.
Reproduced by permission of
AP/Wide World Photos
.
1992 and five in 1993. His most noticed film was The Remains of the Day (1993), for which he was nominated (put forward for consideration) for another Academy Award for his role as Stevens, the reserved butler.

Hopkins also earned Academy Award nominations for his performances as two U.S. presidents: Richard Nixon (1913–1994) in Nixon (1995), and John Quincy Adams (1767–1848) in Amistad (1997). Hopkins was now earning over five million dollars per movie. After filming Titus (1999), he took a year off. In April 2000 he became an American citizen. In 2001 he returned to the role of Hannibal Lecter in Hannibal. He then resumed his usual work pace, appearing in several films including Hearts in Atlantis (2001) and Bad Company (2002). He also volunteered to teach a class at the Ruskin School of Acting in Santa Monica, California.

Hopkins has changed little since his time in Port Talbot. He is still a loner, taking long trips in his car by himself to relax. He has continued to push himself, but he has also learned not to push too hard. He told Vanity Fair magazine, "It can't get better than this. Years ago I wanted to be rich and famous, and it all happened to me.… They pay me a lot of money, more money than I ever dreamed of. It just cannot get better than this."