The German dictator Adolf Hitler led the extreme nationalist and racist Nazi party and served as chancellor-president of Germany from 1933 to 1945. Arguably one of the most effective and powerful leaders of the twentieth century, his leadership led to the deaths of nearly six million Jews.

Adolf Hitler was born on April 20, 1889, in the small Austrian town of Braunau on the Inn River along the Bavarian-German border. The son of an extremely strong-willed Austrian customs official, his early youth seems to have been controlled by his father until his death in 1903. Adolf soon became rebellious and began failing at school. He finally left formal education altogether in 1905 and began his long years of aimless existence, reading, painting, wandering in the woods, and dreaming of becoming a famous artist. In 1907, when his mother died, he moved to Vienna in an attempt to enroll in the famed Academy of Fine Arts. His failure to gain admission that year and the next led him into a period of deep depression as he drifted away from his friends.

It was during this time of feeling rootless that Hitler first became fascinated by the immense potential of mass political manipulation (control). He was particularly impressed by the successes of the anti-Semitic, or anti-Jewish, nationalist Christian-Socialist party of Vienna Mayor Karl Lueger (1844–1910). Lueger's party efficiently used propaganda (spreading a message through literature and the media) and mass organization. Hitler began to develop the extreme anti-Semitism and racial mythology that were to remain central to his own "ideology" and that of the Nazi party.

In May 1913, Hitler returned to Munich, and after the outbreak of World War I (1914–18) a year later, he volunteered for action in the German army in their war against other European powers and America. During the war he fought on Germany's Western front with distinction but gained no promotion (advancement) beyond the rank of corporal (a low-ranking military officer). Injured twice, he won several awards for bravery, among them the highly respected Iron Cross First Class.

The end of the war left Hitler without a place or goal and drove him to join the many veterans who continued to fight in the streets of Germany. In the spring of 1919, he found employment as a political officer in the army in Munich with the help of an adventurer-soldier by the name of Ernst Roehm (1887–1934)—later head of Hitler's elite soldiers, the storm troopers (SA). In this capacity Hitler attended a meeting of the so-called German Workers' party, a nationalist, anti-Semitic, and socialist group, in September 1919. He quickly distinguished himself as this party's most popular and impressive speaker and propagandist, and he helped to increase its membership dramatically to some six thousand by 1921. In April of that year he became Führer (leader) of the renamed National Socialist German Workers' party (NSDAP), the official name of the Nazi party.

The poor economic conditions of the following years contributed to the rapid growth of the party. By the end of 1923, Hitler could count on a following of some fifty-six thousand members and many more sympathizers, and regarded himself as a strong force in Bavarian and German politics. Hitler hoped to use the crisis conditions to stage his own overthrow of the Berlin government. For this purpose he staged the Nazi Beer Hall Putsch of November 8–9, 1923, by which he hoped to force the conservative-nationalist Bavarian government to cooperate with him in a "March on Berlin." The attempt failed, however. Hitler was tried for treason (high crimes against one's country) and given the rather mild sentence of a year's imprisonment in the old fort of Landsberg.

It was during this prison term that many of Hitler's basic ideas of political strategy and tactics matured. Here he outlined his major plans and beliefs in Mein Kampf , which he dictated to his loyal confidant Rudolf Hess (1894–1987). He planned the reorganization of his party, which had been outlawed and had lost much of its appeal. After his release, Hitler reconstituted the party around a group of loyal followers who were to remain the center of the Nazi movement and state.

With the outbreak of world depression in the 1930s, the fortunes of Hitler's movement rose rapidly. In the elections of September 1930, the Nazis polled almost 6.5 million votes, and the party had gained undeniable popularity in Germany. In November 1932, President Hindenburg (1847–1934) reluctantly called Hitler to the chancellorship to head a coalition government of Nazis, conservative German nationalists, and several prominent independents.

The first two years in office were almost wholly dedicated to balancing power. With several important Nazis in key positions and Hitler's military ally Werner von Blomberg in the Defense Ministry, he quickly gained practical control. Hitler rapidly eliminated his political rivals and brought all levels of government and major political institutions under his control. The death of President Hindenburg in August 1934 cleared the way for Hitler to remove the title of president. By doing this, Hitler officially became Führer (all-powerful ruler) of Germany and thereby head of state, as well as commander in chief of the armed forces. Joseph Goebbels's (1897–1945) extensive propaganda machine and Heinrich Himmler's (1900–1945) police system perfected the complete control of Germany. Likewise, Hitler's rule was demonstrated most impressively in the great Nazi mass rally of 1934 in Nuremberg, Germany, where millions marched in unison and saluted Hitler's theatrical appeals.

Once internal control was assured, Hitler began mobilizing Germany's resources for military conquest and racial domination of central and eastern Europe. He put Germany's six million unemployed to work to prepare the nation for war. Hitler's propaganda mercilessly attacked the Jews, whom Hitler associated with all internal and external problems in Germany. Most horrifying was Hitler's installment of the "final solution" of imprisoning and eventually destroying all Jewish men, women, and children in Himmler's concentration camps.

Foreign relations were similarly directed toward preparation for war. The improvement of Germany's military position and the acquisition of strong allies set the stage for world war. To Germany he annexed, or 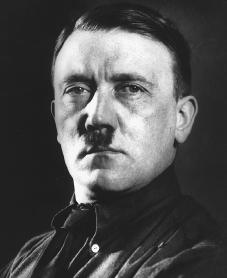 Adolf Hitler.
Reproduced by permission of the
Corbis Corporation
.
added, Austria and the German-speaking Sudetenland of Czechoslovakia, only to occupy all of Czechoslovakia early in 1939. Finally, through threats and promises of territory, Hitler was able to gain the neutrality of the Soviet Union, the former nation that was made up of Russia and other smaller states. Alliances with Italy and Japan followed.

On September 1, 1939, Hitler began World War II with his quest to control Europe. The sudden invasion of Poland was immediately followed by the destroying of Jews and the Polish elite, and the beginnings of German colonization. Following the declaration of war by France and England, Hitler temporarily turned his military machine west, where the light, mobile attacks of the German forces quickly triumphed. In April 1940, Denmark surrendered, soon followed by Norway. In May and June the rapidly advancing tank forces defeated France and the Low Countries. In the Air Battle of Britain, England sustained heavy damage, but held out after German naval operations collapsed.

The major goal of Hitler's conquest lay in the East. On June 22, 1941, the German army advanced on Russia in the so-called Operation Barbarossa, which Hitler regarded as Germany's final struggle for existence and "living space" ( Lebensraum ) and for the creation of the "new order" of German racial domination. However, after initial rapid advances, the German troops were stopped by the severe Russian winter and failed to reach any of their three major goals: Leningrad, Moscow, and Stalingrad. The following year's advances were again slower than expected, and with the first major setback at Stalingrad (1943), the long retreat from Russia began. A year later, the Western Allied forces of America, England, and Russia started advancing on Germany.

With the German war effort collapsing, Hitler withdrew almost entirely from the public. His orders became increasingly erratic (different from what is normal or expected), and he refused to listen to advice from his military counselors. He dreamed of miracle bombs and suspected betrayal everywhere. Under the slogan of "total victory or total ruin," the entire German nation from young boys to old men, often barely equipped or trained, was mobilized and sent to the front. After an unsuccessful assassination attempt on July 20, 1944, by a group of former leading politicians and military men, Hitler's reign of terror further tightened.

In the last days of the Nazi rule, with the Russian troops in the suburbs of Berlin, Hitler entered into a last stage of desperation in his underground bunker in Berlin. He ordered Germany destroyed, believing it was not worthy of him. He expelled his trusted lieutenants Heinrich Himmler and Hermann Göring (1893–1946) from the party and made a last, theatrical appeal to the German nation. Adolf Hitler committed suicide on April 30, 1945, leaving behind a legacy of evil and terror unequaled by any leader in the modern world.

Is that true that the skull found in the the bunker of Hitler in berlin is a skull of a 40 years old woman?
2
ifly6idfkfrkrfk

Dear diosana, it is actually not true. The skull found in the bunker was actually that of a mystical pterodactyl from the triassic period. Hitler kept it as a pet, name Lawrence. It is a little known fact that Lawrence was the commander of SS, Hitler's storm troopers. Hitler dressed him in a purple polka dot coat and fed him 62 kg of bratwurst every day, which he then washed down with blood of Hitler's enemies (Anyone without blonde hair and blue eyes, which is kind of funny since hitler was a ginger. He just dyed his hair to look better for the Reich. Also, he didn't commit suicide. In the bunker, he ran out of Loreal hair coloring supplies and his true hair color was exposed. Gobbels accdentally spilled some gas on Hitler while he was sleeping and the fiery nature of his ginger flow caused him to combust and die.

So no, that skull was not a 40 year old woman.
5
ifly6idfkfrkrfk

Well-written and apparently essentially accurate.
Our society needs to be aware of the demonic nihilistic misanthropic forces and events in human experience, to serve as warnings of what sort of thinking and inclination to avoid, as we ourselves have long been drawn in the same direction nationally.
Our very own culture from the era of King Phillip's War and the Salem "witch" "trials" has been the font and object of similar attitude, flourishing in our own fascist sympathies fostering anti-labor-unionization and anti-immigrant hostilities, largely under the twin guises of "free enterprise" corporatism and "patriotism", especially "anti-Communism" and anti-"socialism"!
We need to become smart and be ware. We are not so great we cannot end the same way! Biblically we, with all humankind, are so warned.
Thank you.
7
Dennis

I heard a story that during W W-1 Lord Mt Batten of England in hand to hand combat took pity on a German solder and spared his life. That solder was Hitler. It was a story told on a Los Angeles Radio station shortly after Lord Mt Batten was killed. Does anyone know if it is true?
8
judy

I read a novel about Hitler who escaped to his bunker and was actually killed there? I can't remember well now but the story goes he placed several of his lookalikes at certain points leading to his bunker whom were all killed till he was reached and killed? Can someone name that novel and confirm this story?