Alfred Hitchcock was a film director famous for well-made suspense thrillers such as Strangers on a Train, Rear Window, and Psycho. He was interested in showing the terror in everyday situations.

Alfred Hitchcock was born in London, England, on August 13, 1899, the youngest of William and Emma Whalen Hitchcock's three children. His father was a poultry salesman and an importer of fruit. Hitchcock was generally a quiet child; however, at five years old his father arranged to have him locked in a cell at the local police station for five minutes after he misbehaved. Hitchcock developed a lifelong interest in the subject of guilt, which was further developed during his time at the strict St. Ignatius College. He also attended the University of London, planning to pursue a career in electrical engineering. After leaving the university he worked with a telegraph company and in advertising. 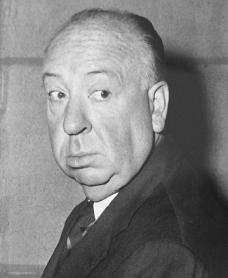 Alfred Hitchcock.
Courtesy of the
Library of Congress
.
as a title card writer with the British division of the Famous Players-Lasky Company, which later became Paramount Pictures. In 1923 he began writing scenes for the Gainsborough Film Studios. Hitchcock's first film as a director was The Pleasure Garden, which was filmed in Germany. His other early films included The Lodger (1925), an exciting treatment of the Jack the Ripper story, and Blackmail (1930), the first British picture with sound. Some think that Hitchcock's next films, The Man Who Knew Too Much (1934) and The Thirty-Nine Steps (1935), were responsible for the revival in British movie making during the early 1930s.

In 1939 Hitchcock left England with his wife and daughter to settle in Hollywood, California. For the most part his American films of the 1940s were expensively produced and entertaining. These included Rebecca (1940), based on a best-selling suspense novel; Suspicion (1941), about a woman who believes her husband is a murderer; Lifeboat (1944), a study of survival on the open seas; and Spellbound (1945), a murder mystery. Less ambitious but more accomplished was Notorious (1946). Hitchcock's first ten years in Hollywood ended with two interesting failures: The Paradine Case (1947) and Rope (1948).

Beginning with the unusual Strangers on a Train (1951), Hitchcock directed a series of films that placed him among the great artists of modern film. His most important films during that time were I Confess (1953), Rear Window (1954), To Catch a Thief (1955) , The Trouble with Harry (1956), The Man Who Knew Too Much (1956), Vertigo (1958), and North by Northwest (1959). Many of Hitchcock's films deal with the theme of an ordinary person caught up in situations beyond his or her control. Hitchcock himself also made a brief appearance (or "cameo") in one scene in each of his films.

Psycho (1960) was Hitchcock's most terrifying and controversial (causing dispute) film, and its most famous scene made an entire generation of moviegoers nervous about taking a shower. The Birds (1963), Marnie (1964), and Family Plot (1976) were Hitchcock's final and less brilliant films. Hitchcock also expanded his directing career into American television, with a series that featured mini-thrillers (1955–65). Because of failing health, he retired from directing after Family Plot. He was knighted in 1979 and died soon afterward in Los Angeles on April 29, 1980.

Hitchcock's films enjoyed new popularity in the 1990s. After a restored version of Vertigo was released in 1996 and was surprisingly successful, plans were made to re-release other films, such as Strangers on a Train. According to Entertainment Weekly, as of 1997 plans were underway to remake as many as half a dozen Hitchcock films with new casts, an idea that met with mixed responses from Hitchcock fans.

Spoto, Donald. The Dark Side of Genius: The Life of Alfred Hitchcock. Boston: Little, Brown, 1983.

Hitchcock was a very briliant director. One of my personal favorites. I love to watch his mind work thoughout the films. Very suspensful, some romantic, and yet... perfect.