Henry VIII was king of England from 1509 to 1547. He established the Church of England and strengthened the position of king. But much of Henry VIII's legacy lies in his string of marriages during a quest for a son who would one day take his throne.

From boy to king

The second son of Henry VII (1457–1509), Henry VIII was born on June 28, 1491, at England's Greenwich Palace. As a child he studied Latin, Spanish, French, and Italian. He also studied mathematics, music, and theology (study of religion). Henry became an accomplished musician and played the lute, the organ, and the harpsichord. He also liked to hunt, wrestle, and joust (to fight on horseback). He also mastered the craft of archery.

Upon his father's death on April 21, 1509, Henry succeeded to a peaceful kingdom. He married Catherine of Aragon (1485–1536), widow of his brother Arthur, on June 11. Thirteen days later they were crowned at Westminster Abbey.

As king of England, Henry moved quickly on a pro-Spanish and anti-French policy. In 1511, together with Spain, Pope Julius II, and others, Henry formed an alliance called the Holy League, in an attempt to drive French king Louis XII out of Italy. Henry claimed the French crown and sent troops to invade France. The bulk of the work in preparing for the invasion fell to Thomas Wolsey (c.1475–1530), who became Henry's trusted war minister. Henry's army won a great victory in France at Guinegate, and the capture of Tournai and Théorouanne.

Peace was made in 1514 with France as well as with the Scots, who invaded England and were defeated at Flodden (September 9, 1513). The marriage of Henry's sister, Mary, to Louis XII (1462–1515) sealed the French treaty. The marriage would secure a worthy alliance (partnership), but Henry longed for greater power. But not even the work of Wolsey, however, could win Henry the precious crown of the Holy Roman Empire. With deep disappointment he saw it bestowed in 1519 on Charles, the Spanish king. He tried to secure Wolsey's election as pope in 1523 but failed.

The search for a son

In 1525 Catherine turned forty, fairly old for someone in the sixteenth century. Her seven pregnancies produced only one healthy child, Mary, born May 18, 1516. Afraid of not having a legitimate (legal) male heir, Henry believed Catherine's inability to give birth to a boy was a judgment from God. Soon, Henry began an affair with Anne Boleyn (c.1507–1536), a servant to Catherine.

A period of great social improvements known as the Reformation (1500s religious movement that affected the society, politics, and the economy) was stalled by Henry's negotiations to nullify (to make void) his marriage. While Catherine would not retire to a nunnery, Anne Boleyn demanded marriage—and the throne. A court sitting in June 1529 heard the case to nullify the marriage. It didn't work. He tried to secure Wolsey's election as pope in 1523 in hopes of using the 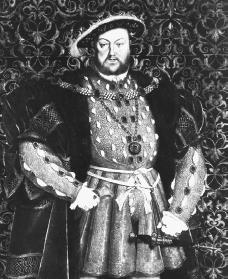 Henry VIII.
Courtesy of the
Library of Congress
.
papacy (office of the pope) to nullify his marriage. This too failed and Henry removed Wolsey from office in 1927.

Henry's strategy to rid himself of his wife matured when Thomas Cromwell (c. 1455–1540) became a councilor and his chief minister. Cromwell forced the clergy (Church officials) to meet in 1531 and accept Henry's headship of the Church. This position would allow Henry to finally annul his marriage. Anne's pregnancy in January 1533 brought matters to a head. In a fever of activity Henry married her on January 25, 1533; secured papal approval in March; had a court declare his marriage to Catherine invalid in May; and waited for the birth of a son. On September 7, 1533, Elizabeth was born. Henry was so disappointed that he did not attend her christening.

Anne's attitude and moody temperament did not suit Henry, and her failure to produce a male heir worsened their relationship. She miscarried (a premature birth which results in the baby's death) a baby boy on January 27, 1536. It was a costly miscarriage, for Henry was already interested in another woman, Jane Seymour. Now determined on a second divorce, Henry brought charges of treason (high crimes against one's country) against Anne for alleged adultery (having affairs outside the marriage). Henry had her executed on May 19 and married Jane ten days later.

Jane brought a measure of comfort to Henry's personal life. She also produced a son and heir, Edward, on October 12, 1537. But Jane died twelve days later. Henry was deeply grieved, and he did not remarry for three years. He was not in good health and suffered from headaches, a painful leg problem, and blockage in his lungs which made him temporarily speechless.

The course of diplomatic (political) events, particularly the fear that Spanish king Charles V (1500–1548) might attempt an invasion of England, led Henry to seek an alliance with the Protestant powers of Europe. To solidify this alliance, Henry married the Protestant princess Anne of Cleves on January 12, 1540. His realization that Charles did not intend to attack, coupled with his distaste for Anne, led to the annulment of his marriage to Anne on July 9, 1540.

Henry was soon introduced to the nineteen-year-old Catherine Howard. He married Catherine within three weeks of his annulment to Anne of Cleves and entered into the later years of his life. In 1542, Catherine was beheaded on charges of adultery. The same year, the Scottish war began as did plans for renewed hostilities with France. War with France began in 1543 and dragged on for three years, achieving a solitary triumph before Boulogne (1545).

Henry then married the twice-widowed Catherine Parr on July 12, 1543. Though she bore him no children, she made him happy. Her religious views were somewhat more radical than those of Henry, who had revised the conservative Six Articles (1539) with his own hand. During his last years he attempted to slow the radical religious tendencies which resulted from the formal break with Rome.

The king was unwell in late 1546 and early 1547, suffering from terrible fevers. Before he died on January 28, 1547, Henry reflected that "the mercy of Christ [is] able to pardon me all my sins, though they were greater than they be."

The legacy of Henry VIII

Henry came to the throne with great gifts and high hopes. His relentless search for an heir led him into an accidental reformation of the Church not entirely to his liking. His desire to cut a figure on the European battlefields led him into costly wars.

Though personally interested in education, Henry sponsored no far-reaching educational policies. However, his interest in naval matters resulted in a larger navy and a well-developed naval administration. He brought Wales more fully into union with the English by the Statute of Wales (1536) and made Ireland a kingdom (1542). The great innovations came out of the Reformation Statutes, not the least of which was the Act in Restraint of Appeals, in which England was declared an empire, and the Act of Supremacy, in which Henry became supreme head of the Anglican Church.

Henry ruled ruthlessly in a ruthless age. He was a king who wished to be succeeded by a son, and for this cause he bravely and rashly risked the anger of the other rulers in Europe. That he did what he did is a testament to his will, personal gifts, and good fortune.

Good article, my only problem was under the title "The search for a son" it says 1927, which is obviously a typo. But all in all, an informative article.