Louis Farrakhan is a leader of the Nation of Islam, a religious group that is more popularly known as the Black Muslims. Beginning in the 1970s he emerged as a spokesman for Black Nationalism, arguing that African Americans should work to improve themselves rather than expect whites to help them. He was frequently criticized for mixing his positive messages with remarks that some felt showed prejudice (dislike of people based on their race or religion) toward white and Jewish people.

Louis Farrakhan was born Louis Eugene Walcott on May 11, 1933, the son of Percival Clark and Mae Manning Clark. His father was a Jamaican man who later deserted his family, and his mother was a domestic worker who had come to the United States from the West Indies. Farrakhan's family moved to Boston, Massachusetts, when he was three. Farrakhan had a talent for music and began taking violin lessons at the age of five. In high school he was an honor student, a good track athlete, and a member of the choir in the local Episcopalian church. After two years of college he began a career as a professional violinist and singer who used such stage names as "The Charmer."

In 1955 Farrakhan was taken by a friend to hear a speech by Elijah Muhammad (1897–1975), the leader of the Nation of Islam. Muhammad was the second head of the movement, having attained his position following the disappearance of founder W. D. Fard in 1934. Under Muhammad the movement had grown to include hundreds of thousands of members with a large network of farms, restaurants, stores, and schools. Muhammad spoke out against "white devils" and promised that one day God would restore African Americans, who were regarded by the Nation of Islam as the original humans, to their rightful position as leaders of the world. Muhammad forbid his followers to smoke, drink, fight, eat pork, and engage in destructive behavior. Followers were also commanded to say prayers, attend religious services regularly, improve their education, and serve the movement. Farrakhan joined soon after hearing Muhammad speak. He took the name Louis X (a common Nation of Islam practice indicating that one's identity had been stolen during slavery) and later Louis Farrakhan. 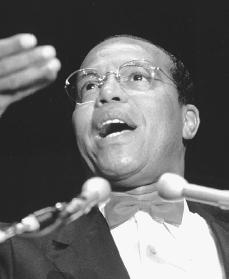 Louis Farrakhan.
Reproduced by permission of the
Corbis Corporation
.

Moving up and breaking away

Farrakhan's ability and dedication were noticed by Muhammad, who appointed him minister of the Boston mosque (a building used by Muslims for public worship). After the death of Malcolm X (1925–1965) he was appointed leader of the important Harlem Temple No. 7 and official spokesperson for Elijah Muhammad. He was also given the important task of introducing Muhammad at rallies on Savior's Day, a major Nation of Islam holiday celebrating Fard's birthday.

Elijah Muhammad died in 1975 and his son Wallace Muhammad (1933–), who was much quieter and more moderate than his father, became leader of the Nation of Islam. At Wallace Muhammad's invitation Farrakhan moved to Chicago, Illinois, to work in the movement's headquarters. Soon Wallace Muhammad began to pursue a program of moderation for the movement. He abandoned its antiwhite stance—even letting whites join—and built bridges to the larger world from the Islamic community. Farrakhan became a major voice of a group within the movement made up of members who disagreed with the move toward moderation. He resigned from the movement in 1978 and organized a new Nation of Islam that closely resembled Elijah Muhammad's group, with dress and behavior codes and Muslim institutions and businesses. The racial theories and antiwhite sentiment of the Muhammad days were stressed once again. Farrakhan opened mosques in cities across America and reached out to the wider African American community through publications and a radio show.

Farrakhan's Nation of Islam, which in 1983 was estimated to have between five to ten thousand members, remained little known until March 1984, when controversy (a discussion marked by the expression of opposing views) suddenly erupted over his association with presidential candidate Jesse Jackson (1941–). Farrakhan, who had earlier advised his followers to avoid political involvements, had thrown his support behind Jackson, even providing bodyguards for the candidate. Farrakhan had registered to vote for the first time and urged his followers to do the same. Jackson had returned the favor by appearing as the featured speaker at the Muslim Savior's Day rally in February 1984.

In March, however, Farrakhan called Milton Coleman, an African American reporter for the Washington Post, a traitor after Coleman disclosed that Jackson had made offensive remarks about Jewish people while speaking with campaign assistants. In a speech, Farrakhan said of Coleman, "One day soon we will punish you with death." He later denied that he was threatening Coleman's life. Farrakhan's role in Jackson's campaign was greatly reduced after it became known that Farrakhan had referred to Judaism as a "gutter religion" and described Adolf Hitler (1889–1945), the German leader who caused the deaths of millions of Jewish people during World War II (1939–45), as "a very great man."

Criticism of Farrakhan increased when it was uncovered that during the 1980s he had visited Libya and received a $5 million interest-free loan from Libyan head of state Mu'ammar al-Qadhafi (1942–) to help build Muslim institutions and businesses. Qadhafi was known to have provided training and money for terrorist acts. Farrakhan explained that he sought to raise hundreds of millions of dollars for African American self-improvement programs from all of the groups, including Arabs, that had been involved in the slave trade and the destruction of African culture.

After the publicity he received during the 1984 presidential campaign, Farrakhan continued his busy public speaking schedule and continued to have an influence on African Americans far beyond the membership of his own movement. He and his wife, Betsy, have nine children and live in a mainly white neighborhood in Chicago. In 1993, on his sixtieth birthday, Farrakhan performed a violin concert on Chicago's South Side in an attempt to better his image. The concert was held at a temple in hopes that tensions between Farrakhan and the Jewish community could be mended. Farrakhan also opened a $5 million restaurant, the Salaam Restaurant and Bakery, in March 1995 with funds collected from followers and the sale of the Final Call, an Islamic newspaper.

The loyalty of Farrakhan's followers was most evident in October 1995 in Washington, D.C. Farrakhan had urged at least one million African American men to travel to the nation's capital as a show of strength for their community. The Million Man March, as it was called, was designed to create solidarity (a feeling of unity, or oneness) among members of the African American community and to help bridge a gap between whites and African Americans. The march surprised many, not only because of the large number of participants but because few thought that Farrakhan could promote and pull off a nonviolent protest. The Million Man March was followed up in 2000 by the Million Family March, celebrating family and unity and stressing the need for education and the importance of voting.