Fannie Farmer was an American authority in the art of cooking and the author of six books about food preparation. She was a determined woman who overcame her physical limitations to achieve success in her field.

Fannie Merritt Farmer was born in Boston, Massachusetts, on March 23, 1857. She was the eldest of four daughters of J. Franklin Farmer, a master printer, and Mary Watson Merritt Farmer. The Farmers moved to Medford, Massachusetts, when Fannie was a child. Though they were not wealthy, the Farmers strongly believed that their daughter should receive a solid education. Fannie's parents had hopes of sending her to college, but after high school graduation she suffered a stroke that left her paralyzed. Her doctor discouraged all thoughts of further schooling. Fannie was unable to get out of bed for months and remained an invalid for years. She did, however, learn to use her legs again. She was eventually able to walk, but always retained a limp.

While at home, Farmer helped around the house but she was not able to help her family financially until she was in her mid-twenties. By that time she was well enough to take a job with the Shaw family. It was here that she showed a strong interest in cooking. By the time Fannie had reached thirty-one years of age, her physical condition had markedly improved. Her parents and the Shaw family advised her to seek schooling that would develop and refine her knowledge and abilities in cooking.

Farmer then enrolled in the Boston Cooking School, where her performance was outstanding. Because of the excellence of her work, upon graduation in 1889 she was invited to serve as assistant director of the school under Carrie M. Dearborn. Farmer began to understand the association between eating and good health. Her inquiring mind led her into further studies, including a summer course at the Harvard Medical School.

After Dearborn's death in 1891, Farmer was appointed director of the school. While there she published her impressive, highly significant Boston Cooking School Cookbook (1896), of which twenty-one editions were printed before her death. It has remained a standard work. She served as director of the school for eleven years. After her resignation in 1902, she established her own school and named it Miss Farmer's School of Cookery. It was decidedly creative and inventive, emphasizing the practice of cooking instead of theory. Its program was designed to educate housewives rather than to prepare teachers. The school also developed cooking equipment for the sick and the physically disabled. Farmer became a highly respected authority in her field, and she was invited to deliver lectures to nurses, women's clubs, and even the Harvard Medical School.

One of Farmer's major contributions was teaching cooks to carefully follow recipes. She pioneered the use of standard level measurement in cooking. Farmer, her school, and her cookbooks were extremely popular. She received favorable newspaper 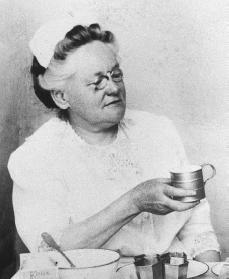 Fannie Farmer.
Reproduced by permission of the
Corbis Corporation
.
coverage in many American cities, and her influence was widespread. The well-attended weekly lectures at the school were tributes to the value of the work she and her assistants were doing. She also wrote a popular cooking column, which ran for nearly ten years in the Woman's Home Companion, a national magazine.

Farmer was a woman of unusual motivation, intelligence, and courage. Though she suffered another paralytic stroke later in her life, she continued lecturing. In fact, ten days before her death in 1915, she delivered a lecture from a wheelchair. Fannie Farmer died on January 15, 1915.

Smallzried, Kathleen Ann. The Everlasting Pleasure: Influences on America's Kitchens, Cooks, and Cookery from 1565 to the Year 2000. New York: Appleton-Century-Crofts, 1956.