Walter Elias Disney was born in Chicago, Illinois, on December 5, 1901, the fourth of five children born to Elias and Flora Call Disney. His father, a strict and religious man who often physically abused his children, was working as a building contractor when Walter was born. Soon afterward, his father took over a farm in Marceline, Missouri, where he moved the family. Walter was very happy on the farm and developed his love of animals while living there. After the farm failed, the family moved to Kansas City, Missouri, where Walter helped his father deliver newspapers. He also worked selling candy and newspapers on the train that traveled between Kansas City and Chicago, Illinois. He began drawing and took some art lessons during this time.

Disney dropped out of high school at seventeen to serve in World War I (1914–18; a war between German-led Central powers and the Allies—England, the United States, and other nations). After a short stretch as an ambulance driver, he returned to Kansas City in 1919 to work as a commercial illustrator and later made crude animated cartoons (a series of drawings with slight changes in each that resemble movement when filmed in order). By 1922 he had set up his own shop as a partner with Ub Iwerks, whose drawing ability and technical skill were major factors in Disney's eventual success.

Initial failure with Ub Iwerks sent Disney to Hollywood, California, in 1923. In partnership with his older brother, Roy, he began producing Oswald the Rabbit cartoons for Universal Studios. After a contract dispute led to the end of this work, Disney and his brother decided to come up with their own character. Their first success came in Steamboat Willie, which was the first all-sound cartoon. It also featured Disney as the voice of a character first called "Mortimer Mouse." Disney's wife, Lillian (whom he had married in 1925) suggested that Mickey sounded better, and Disney agreed.

Disney reinvested all of his profits toward improving his pictures. He insisted on technical perfection, and his gifts as a story editor quickly pushed his firm ahead. 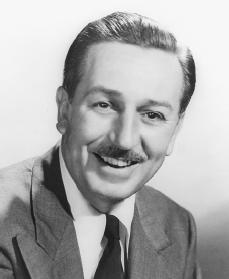 Walt Disney.
Courtesy of the
Library of Congress
.
The invention of such cartoon characters as Mickey Mouse, Donald Duck, Minnie, and Goofy, combined with the clever use of music, sound, and folk material (as in The Three Little Pigs ), made the Disney shorts of the 1930s successful all over the world. This success led to the establishment of the hugely profitable, Disney-controlled sidelines in advertising, publishing, and merchandising.

Disney rapidly expanded his studio operations to include a training school where a whole new generation of artists developed and made possible the production of the first feature-length cartoon, Snow White (1937). Other costly animated features followed, including Pinocchio, Bambi, and the famous musical experiment Fantasia. With Seal Island (1948), wildlife films became an additional source of income. In 1950 Treasure Island led to what became the studio's major product, live-action films, which basically cornered the traditional "family" market. Disney's biggest hit, Mary Poppins, was one of his many films that used occasional animation to project wholesome, exciting stories containing sentiment and music.

On July 18, 1957, Disney opened Disneyland in Anaheim, California, the most successful amusement park in history, with 6.7 million people visiting it by 1966. The idea for the park came to him after taking his children to other amusement parks and watching them have fun on amusement rides. He decided to build a park where the entire family could have fun together. In 1971 Disney World in Orlando, Florida, opened. Since then, Disney theme parks have opened in Tokyo, Japan, and Paris, France.

Disney also dreamed of developing a city of the future, a dream that came true in 1982 with the opening of Experimental Prototype Community of Tomorrow (EPCOT). EPCOT, which cost an initial $900 million, was planned as a real-life community of the future with the very latest in technology (the use of science to achieve a practical purpose). The two principle areas of EPCOT are Future World and World Showcase, both of which were designed for adults rather than children.

Furthermore, Disney created and funded a new university, the California Institute of the Arts, known as Cal Arts. He thought of this as the peak of education for the arts, where people in many different forms could work together, dream and develop, and create the mixture of arts needed for the future. Disney once commented: "It's the principal thing I hope to leave when I move on to greener pastures. If I can help provide a place to develop the talent of the future, I think I will have accomplished something."

Disney's parks continue to grow with the creation of the Disney-MGM Studios, Animal Kingdom, and an extensive sports complex in Orlando. The Disney Corporation has also branched out into other types of films with the creation of Touchstone Films, into music with Hollywood Records, and even into vacations with its Disney Cruise Lines. In all, the Disney name now covers a multi-billion dollar enterprise, with business ventures all over the world.

In 1939 Disney received an honorary (received without meeting the usual requirements) Academy Award, and in 1954 he received four more Academy Awards. In 1965 President Lyndon B. Johnson (1908–1973) presented Disney with the Presidential Medal of Freedom, and in the same year Disney was awarded the Freedom Foundation Award.

Walt Disney, happily married for forty-one years, was moving ahead with his plans for huge, new outdoor recreational areas when he died on December 15, 1966, in Los Angeles, California. At the time of his death, his enterprises had brought him respect, admiration, and a business empire worth over $100 million a year, but Disney was still mainly remembered as the man who had created Mickey Mouse almost forty years before.

i loved this article so much it had a lot of great information!!
2
Micho Cox

THANK YOU SO MUCH for this. I used this infromation for a school project Due tomorrow. (REALY LAST MINUTE ITS 10:30 PM) Thank you for all the information. You REALY saved my butt. THANK YOU THANK YOU THANK YOU!!! GOOD WORK!!!
3
Bobby

Hey,
I need to know the author of this article.

Can you tell me if Walt Disney hand any children?

did walt ever work for the national cash register company?
7
Xavier

Wait, did Walts father really physically abusive? I was looking at several other resources and none of them said that he was.
8
Avery

Amazing article but i have 2 questions what were Walt's siblings names,and in one article i read it said he was the youngest
9
Elga

what is his family history and what did his family think about disney.