Elizabeth Dole's work as a lawyer, White House aide, cabinet officer, and president of the American Red Cross has made her one of the most recognizable faces in the American political landscape.

Elizabeth Hanford Dole was born on July 29, 1936, and grew up in Salisbury, North Carolina, the daughter of a well-to-do flower wholesaler. As a small child, she called herself Liddy, and the nickname stuck, although as an adult she prefers Elizabeth. She looked up to her grandmother as well as her brother, who was thirteen years older. Her childhood was privileged, and she received private ballet, piano, and horseback riding lessons.

Always an excellent student, she was also active in drama and student government. She was elected president of her freshman class in high school. She attended Duke University and majored in political science. Dole was often described as friendly, gracious, and "brainy," attributes that led to her election as college May Queen, as student body president, and to Phi Beta Kappa (an undergraduate honors society).

In 1960 Dole received a master's degree in education from Harvard, and graduated from Harvard Law School in 1965 as one of twenty-five female graduates in a class of five hundred. After law school Dole went to Washington, D.C. In Washington she earned a reputation as a supporter of consumer rights while working in various government agencies, including the Department of Health, Education and Welfare; the Presidential Committee for Consumer Interests; and the U.S. Office of Consumer Affairs. Although briefly employed in private law practice, her main commitment soon became public service.

Career and marriage in Washington

In 1973 Dole was nominated to be one of five commissioners on the Federal Trade Commission (FTC). Once appointed, she became known for her enforcement of the Equal Credit Opportunity Act of 1975, which gives all people in the United States an equal chance to receive credit and loans, and for investigating nursing home abuses. A colleague at the FTC remembered her priorities as "the poor, the handicapped, minorities, and women."

Elizabeth Hanford married Robert Dole, the senior senator from Kansas, in 1975. They quickly became known as Washington's top "Power Couple" because of their important roles in national politics. However glamorous that title may seem, it referred strictly to their jobs and not their social life. Their lives revolved almost totally around their work. Marrying late in life (she was nearly forty and the senator was fifty-three), the Doles had no children.

Although Dole was a Democrat in her early years, she became a registered Independent, and then, after her marriage, she became a Republican. She campaigned vigorously when her husband ran for vice president in 1976. When he ran for president in 1979, she gave up her position as FTC commissioner to campaign for him full-time. Although that campaign was unsuccessful, by 1980 "Liddy" Dole was becoming well known as one of the Republican Party's most outstanding female leaders and recognized as a competitor for high political office.

Service in Reagan and Bush administrations

In 1983 President Ronald Reagan appointed Dole as secretary of transportation, the first woman in American history to hold that cabinet position. She headed an organization of 102,000 employees and administered a budget of $28 billion. Since the secretary of transportation is also the director of the U.S. Coast Guard, she was the first woman to command an armed service in the United States.

Safety became Dole's focus. She supported putting a third brake light on cars and installing air bags to protect passengers. Her early victories as secretary included winning government funds for new passenger railway lines and for the renovation of Washington, D.C.'s Union Station, as well as for the passage of a maritime (involving transportation by sea) reform bill.

Despite her identification with liberal (in favor of individual rights) consumer issues and her former support for the Equal Rights Amendment (the ERA; a proposed amendment to the U.S. Constitution, which would have guaranteed equality under the law to all Americans regardless of sex), which Reagan opposed, Dole received strong backing from the conservative (in favor of preserving tradition and gradual change) Reagan administration. Critics, however, viewed her commitment to important issues as secondary to her ambition. The Washington Monthly summarized this feeling when it observed that Dole was a "role player, her positions defined by her job description rather than deeply felt beliefs." 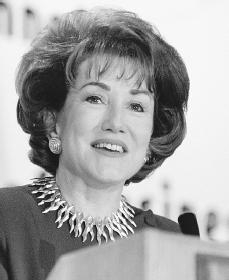 Elizabeth Dole.
Reproduced by permission of
AP/Wide World Photos
.
in 1987 when she described her Christian beliefs at the National Prayer Breakfast in Washington, D.C. Afterwards Dole became a favorite of Christian conservatives and began to speak regularly to religious groups around the country.

Dole resigned as secretary of transportation in 1987 to campaign for her husband's second run for the presidency, which, like the first, was unsuccessful. Because of her previous cabinet-level experience under Reagan, and her immense popularity within the Republican Party, Dole was asked to be the new secretary of labor by President George Bush (1924–) in 1989. As secretary of labor, Dole negotiated a raise in the minimum wage. She also oversaw efforts to break "glass ceiling" restrictions that prevented movement of women and minorities into high executive positions.

In 1990 Dole resigned as secretary of labor to become the president of the American Red Cross, an organization for emergency relief. As head of the Red Cross she oversaw a $1.8 billion annual budget, 32,000 employees, and 1.4 million volunteers. Priorities during her first term included improving the safety of the nation's blood supply against acquired immune deficiency syndrome (AIDS; a disease that affects the immune system) and improving the charitable giving by Americans. In 1996 Dole took a one-year leave of absence to assist her husband's third unsuccessful campaign for the presidency. She returned to the agency in 1997, but resigned in early 1999.

According to the New York Times, Dole's leave of absence from the Red Cross was an example of her belief in and commitment to her husband. It was the fourth time that she had left a job to help him. Her loyalty was apparent at the 1996 Republican National Convention in her talk-show style "Why I Love Bob" speech. During the speech, she walked into the audience and spoke in personal terms about her husband. She delivered a biographical speech describing the senator from his childhood days in Kansas to his bid for the White House. So successful was Dole's speech that, after the convention, she acquired her own staff of thirty and campaigned separately for her husband. Despite her efforts, the senator was defeated by then-president Bill Clinton.

Dole continued to be a popular guest speaker and delivered the 1997 commencement address at Duke University. In March 1999, she announced her unofficial bid for the 2000 presidential election, but withdrew from the race in October of that year because she did not have enough money. The following March she supported the presidential campaign of fellow Republican George W. Bush (1946–). Although Dole dropped out of the 2000 presidential race, she continues to be active in politics. In 2002, she was the Republican nominee for the open U.S. Senate seat from North Carolina.