One of the finest poets in the English language, the American poet Emily Dickinson was a keen observer of nature and a wise interpreter of human passion. In the privacy of her study, Dickinson developed her own forms of poetry and pursued her own visions, not paying attention to the fashions of literature of her day. Most of her work was published by her family and friends after her death.

Emily Dickinson was born on December 10, 1830, in Amherst, Massachusetts, the oldest daughter of Edward Dickinson, a successful lawyer, member of Congress, and for 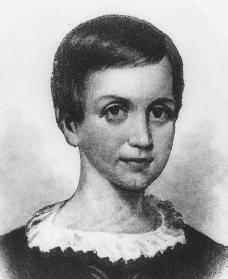 Emily Dickinson.
Courtesy of the
Library of Congress
.
many years treasurer of Amherst College, and of Emily Norcross Dickinson, a timid woman. Dickinson was fun-loving as a child, very smart, and enjoyed the company of others. Her brother, Austin, became a lawyer like his father and was also treasurer of Amherst College. The youngest child of the family, Lavinia, became the chief housekeeper and, like her sister Emily, remained at home all her life and never married. The sixth member of this tightly knit group was Susan Gilbert, Emily's ambitious and witty schoolmate who married Austin in 1856 and who moved into the house next door to the Dickinsons. At first she was Emily's very close friend and a valued critic of her poetry, but by 1879 Emily was speaking of her as a "pseudo-sister" (false sister) and had long since stopped exchanging notes and poems.

Amherst in the 1840s was a sleepy village dominated by religion and the college. Dickinson was not religious and probably did not like some elements of the town—concerts were rare, and card games, dancing, and theater were unheard of. For relaxation she walked the hills with her dog, visited friends, and read.

Dickinson graduated from Amherst Academy in 1847. The following year (the longest time she was ever to spend away from home) she attended Mount Holyoke Female Seminary, but because of her fragile health she did not return. At the age of seventeen she settled into the Dickinson home and turned herself into a housekeeper and a more than ordinary observer of Amherst life.

It is not known when Dickinson began to write poetry or what happened to the poems of her early youth. Only five poems can be dated before 1858, the year in which she began gathering her work into handwritten copies bound loosely with thread to make small packets. She sent these five early poems to friends in letters or as valentines. After 1858 she apparently convinced herself she had a genuine talent, for now her poems were carefully stored in a box for the possibility of inspection by future readers or even a publisher.

Publication, however, was not easily arranged. For four years Dickinson sent her friend Samuel Bowles, editor of the Springfield Republican, many poems and letters. He published two poems, both without her name given as the author. And the first of these was edited, probably by Bowles, to make regular (and thus flatten) the rhymes and the punctuation. (Only seven poems were published during her lifetime, with editors altering all of them.)

In 1862 Dickinson turned to the literary critic Thomas Wentworth Higginson for advice about her poems. In time he became, in her words, her "safest friend." She began her first letter to him by asking, "Are you too deeply occupied to say if my verse is alive?" Six years later she was bold enough to say, "You were not aware that you saved my life." They did not meet until 1870—at her request, surprisingly—and only once more after that.

What Dickinson was seeking was assurance as well as advice, and Higginson apparently gave it without knowing it, through the letters they sent to each other the rest of her life. He helped her not at all with what mattered most to her—establishing her own private poetic method—but he was a friendly ear and mentor during the most troubled years of her life. Out of her inner troubles came rare poems in a form that Higginson never really understood.

Between 1858 and 1866 Dickinson wrote more than eleven hundred poems, full of off-rhymes and odd grammar. Few poems are more than sixteen lines long. The major subjects are love and separation, death, nature, and God—but especially love. When she writes "My life closed twice before its close," one can only guess who her real or imagined lovers might have been. Higginson was not one of them. It is more than likely that her first "dear friend" was Benjamin Newton, a young man too poor to marry who had worked for a few years in her father's law office.

During a visit to Philadelphia, Pennsylvania, in 1855, Dickinson met the Reverend Charles Wadsworth. Sixteen years older than her, a brilliant preacher, and already married, he was hardly more than a mental image of a lover. There is no doubt she made him this, but nothing more. He visited her once in 1860. When he moved to San Francisco, California, in May 1862, she was in despair. Only a month before, Samuel Bowles had sailed for Europe for health reasons. She needed love, but she had to satisfy this need through her poems, perhaps because she felt she could deal with it no other way.

When Bowles returned to Amherst in November, the emotion Dickinson felt was so great that she remained in her bedroom and sent down a note: "That you return to us alive is better than a summer, and more to hear your voice below than news of any bird." By the time Wadsworth returned from California in 1870, the crisis was over. Higginson had not saved her life; her life was never in danger. What had been in danger was her emotional balance and her control over her intense talent.

In the last two decades of Dickinson's life, she wrote fewer than fifty poems a year, perhaps because of continuing eye trouble, but more probably because she had to take more responsibility in running the household. Her father died in 1874, and a year later her mother suffered a stroke that left her disabled until her death in 1882. Dickinson's health failed noticeably after a nervous collapse in 1884, and on May 15, 1886, she died.

It is clear that Dickinson could not have written to please publishers, who were not ready to risk her striking style and originality. Had she published during her lifetime, negative public criticism might have driven her to an even more solitary state of existence, even to silence. "If fame belonged to me," she told Higginson, "I could not escape her; if she did not, the longest day would pass me on the chase.… My barefoot rank is better." The twentieth century lifted her without doubt to the first rank among poets.

Habegger, Alfred. My Wars Are Laid Away in Books. New York: Random House, 2001.

I really enjoyed this biography. I found it to be very informational, and easy to read.
2
jamika glaze

this biograohy of emily dickinson was very useful. and much of help for my project! thanks! =]
4
Destiny Carpenter

Is it true that when dickinson was sick and she had secluded herself form the world that she had a doctor come to the house and stand outside and examine heer through the glass?
5
devin