The French philosopher (seeker of wisdom), playwright, and novelist Denis Diderot is best known as the editor of the Encyclopédie, a summary of information on all subjects that also questioned the authority of the Catholic Church.

On October 15, 1713, Denis Diderot was born in Langres, Compagne, France, one of Didier and Angelique Diderot's seven children. His father was a cutler (a maker of cutting tools). As a child Denis was considered a brilliant student by his teachers, and it was decided that he should serve the church. In 1726 he enrolled in the Jesuit (Catholic order of priests devoted to educational work) college of Louis-le-Grand and probably later attended the Jansenist Collège d'Harcourt. In 1732 he earned a master's in philosophy (the study of the universe and man's place in it).

Diderot then abandoned religion as a career and decided to study law. The death of his sister, a nun, from being overworked in the convent may have affected Diderot's opinion of religion. In 1734 Diderot decided to seek his fortune by writing. Against his family's consent, he spent the next ten years earning his living by translating English books and tutoring the children of wealthy families. He spent his leisure time studying and chasing after women. In 1743 he further angered his father by marrying Anne Toinette Champion.

In January 1746 André François le Breton and his partners were granted permission to publish a ten-volume encyclopedia. On the advice of the mathematician Jean D'Alembert and with the consent of Chancellor D'Aguesseau, Diderot was named general editor of the project.

For more than twenty-six years Diderot devoted the bulk of his energies to the writing, editing, and publishing of the Encyclopédie. For Diderot the aim of the work was "to assemble the knowledge scattered over the face of the earth; to explain its general plan to the men with whom we live … so that we may not die without having deserved well of the human race." Such was the plan and the purpose of the Encyclopédie, and it was also the motto of the Enlightenment (the eighteenth-century awakening of political and social thought that laid the foundation for the French and American revolutions). But the project was more than just the gathering of all available knowledge; it was also a learning experience for all those connected with it. It introduced Diderot to crafts, fine arts, and many other areas of learning. It was an outlet for his curiosity, his scholarly interests, and his creativity.

In 1751 D'Alembert's Preliminary Discourse and the first volume of the Encyclopédie were published. In January 1752 the second volume appeared, but the opposition of Jesuits and other critics forced a temporary suspension. Publication was soon resumed and continued at the rate of one volume a year until 1759, when the Royal Council banned further operations. Diderot and Le Breton, however, continued to write and publish the Encyclopédie secretly until 1765, when official approval was regained. In 1772 the completed work was published 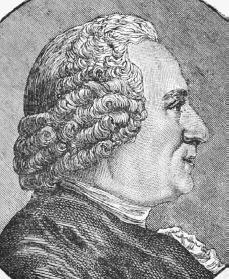 Denis Diderot.
Reproduced by permission of
Archive Photos, Inc.
in seventeen volumes of text and eleven volumes of illustrations.

Diderot continued to devote himself to other writings throughout the period of his association with the Encyclopédie. In 1746 he published Philosophical Thoughts, which discussed the relationship between nature and religion. He stated his belief that virtue (moral excellence) could be achieved without religious beliefs. In Sceptics Walk (1747) and Letters on the Blind (1749) Diderot slowly turned to atheism (a disbelief in the existence of God). Religion became a central theme in his writings, and he angered public officials, who considered him a dangerous leader of radicals (those holding extremely different views).

In 1749 Diderot was imprisoned for three months because of his opinions in Philosophical Thoughts. He had stated, "If you impose silence on me about religion and government, I shall have nothing to talk about." After his release he toned down his published works. Therefore, most of his antireligious works and several of his novels were not published during his lifetime.

Following the completion of the Encyclopédie in 1772, Diderot went into semiretirement; he wrote steadily but did not publish all of his works. His earnings as editor of the Encyclopédie guaranteed him a decent income, which he added to by writing literary criticism. In addition, he sold his library to Empress Catherine of Russia (1729–1796), who allowed him to keep it while he lived and paid him an annual salary as its librarian. On July 30, 1784, Diderot died in the home of his daughter.