During the first half of the twentieth century, John Dewey was one of America's most famous teachers of philosophy (the study of the universe and man's place in it). He also made some controversial suggestions for changes in the American educational system.

Born on October 20, 1859, in Burlington, Vermont, John Dewey was the third of Archibald Dewey and Lucina Artemisia Rich's four children. His father was a local merchant who loved literature. His mother possessed a stern moral sense based on her belief in Calvinism (a religion in which one's faith is expressed through moral behavior and good works). John Dewey learned about other cultures from nearby Irish and French-Canadian settlements. Boyhood jobs delivering newspapers and working at a lumber-yard added to his knowledge. While visiting his father, who served in the Union Army in Virginia, he viewed the horror of the Civil War (1861–1865) firsthand.

At the age of fifteen, Dewey, after receiving average grades in Vermont public schools, entered the University of Vermont. His best grades were in science, which he would later regard as the highest expression of human intellect. Dewey became aware of the world of ideas during his senior year. Courses on psychology (the science of mind and behavior), religion, ethics (the study of moral values), and logic (the science of reasoning) interested him more than his earlier training in languages and science. His teacher, H. A. P. Torrey, introduced him to the works of different philosophers. The quality of his work improved, and at the age of nineteen, he graduated second in his class.

Unsure of what career to pursue, Dewey hoped to teach high school. After an unsuccessful summer of job hunting, his cousin, principal of a seminary (institute for the training of priests) in Pennsylvania, got him a teaching job, which he held for two years. Dewey continued to read philosophy in his spare time. When his cousin resigned, however, Dewey lost his job. He returned to Vermont to become the only teacher in a private school in Charlotte. He began to spend time with Torrey again, and the two discussed Dewey's readings in ancient and modern philosophy.

At this time most American philosophy teachers were religious men, who placed more importance on religious ideas than on creative thought. Philosophy was taught by lay teachers (teachers not associated with any particular religion) in only a few schools. One such school was in St. Louis, where William T. Harris established the Journal of Speculative Philosophy. Here Dewey published his first essay. Dewey decided to pursue a career in philosophy and applied for admission to the newly founded Johns Hopkins University, which also attracted and employed lay philosophers. At Johns Hopkins, Dewey studied with George S. Morris, who was on leave as chairman of the philosophy department at the University of Michigan. In 1884 Dewey completed his doctorate and, at Morris's invitation, he went to teach at Michigan.

In Ann Arbor, Michigan, Dewey met and married Alice Chipman, with whom he would have seven children. He became interested 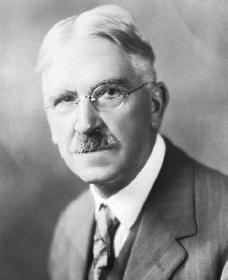 John Dewey.
Courtesy of the
Library of Congress
.
in problems of education as he traveled around the state to monitor the quality of college preparation courses. In 1888 he accepted an appointment at the University of Minnesota, only to return to Michigan a year later to replace Morris, who had died. The next stage in Dewey's intellectual development came with his reading of William James's Principles of Psychology. Dewey became a believer in "instrumentalism," a belief that thinking is an activity which, at its best, is directed toward resolving problems.

In 1894 Dewey moved to Chicago, Illinois, after accepting a position as head of a new department of philosophy and psychology at the University of Chicago. To test his theories of education, he started an experimental school with his wife as principal. The "Dewey school," however, caused a struggle between its founder and the university's president, William R. Harper. In 1904, when Harper tried to fire his wife, Dewey resigned in protest. One of Dewey's friends then got him a job at Columbia University in New York, New York, where Dewey spent the rest of his teaching years.

Peak of his influence

Living in New York placed the Deweys at the center of America's cultural and political life. In 1929 Dewey helped organize the League for Independent Political Action in hopes of creating a new political party. He also served as an editor of the New Republic magazine and helped found both the American Civil Liberties Union and the American Association of University Professors. After World War I (1914–18), he traveled the world, lecturing in Japan at the Imperial Institute and spending two years teaching at universities in China. In 1924 he went to study schools in Turkey, and two years later he visited the University of Mexico. His praise for the Russian educational system he inspected on a 1928 trip to the Soviet Union earned him much criticism. Dewey was a shy and quiet man, and as a teacher he sometimes put his students to sleep. Those who managed to stay awake, however, could watch a man fascinated with ideas actually creating ideas in his classroom.

In 1930 Dewey retired from teaching, but he continued to publish works clarifying his ideas. Although many are difficult to read, he published over three hundred books and articles. In public affairs he was one of the first to warn of the dangers from Adolf Hitler's (1889–1945) rise to power in Germany and of the Japanese threat in the Far East. At the age of eighty-seven, Dewey married a widow, Roberta Grant. (His first wife died in 1927.) In the early 1950s Dewey's support of American intervention in Korea earned him criticism from the Soviet Union. He died on June 1, 1952.

In his philosophy Dewey sought to rise above what he considered the inaccurate statements made by other philosophers. While he saw most of man's behavior as shaped by habit, he believed that the processes of change often produced conditions that could not be explained. The resulting conflict led to creative thinking in which man tried to reestablish control of his changing environment. Thought, for Dewey, was part of a process by which man related to his surroundings. Dewey believed that universal education could train men to break through habit into creative thought.

Dewey saw American democracy, which he considered the best form of government, challenged by the effects of the industrial revolution, which had led to too much wealth in the hands of a few men. This threat, he believed, could be met by the right kind of education. The "progressive education" movement of the 1920s was based on Dewey's ideas. Because he placed great importance on the classroom as a place for students to encounter the "present," his interpreters sometimes neglected to study the past and to prepare students for the future. Dewey's influence on American schools was so strong that many critics attacked his ideas as the cause of all that they found wrong with American education.