Lady Diana Frances Spencer married Prince Charles (1948–) in 1981 and became Princess of Wales. Retaining her title and her popularity after the royal couple divorced in 1996, Diana continued her charitable work. She died in a tragic car accident in 1997.

Diana Frances Spencer was born on July 1, 1961, in Norfolk, England, the third of the Lord and Lady Althorp's four children. She grew up next door to the royal family's Sandringham estate. One of Diana's playmates was Prince Andrew, Charles's brother. Diana's mother, the Honorable Frances Shand-Kydd, was the daughter of a wealthy Anglo-Irish baron. Diana's father, the Viscount Althorp, who became an earl in 1975, was a direct descendant of King Charles II (1630–1685).

Diana, a quiet and reserved child, had a happy home life until she was eight years old, when her parents went through a bitter divorce. Her father won custody of the children. Diana's academic career was unremarkable. She was tutored at home until age nine, when she was sent to Riddlesworth Hall in Norfolk. At the age of twelve, Diana began attending the exclusive West Heath School in Sevenoaks, Kent, England. After failing to pass two exams she left West Heath at the age of sixteen. Her father then sent her to a Swiss school, but she quickly became homesick and returned to Norfolk. She hired herself out as a part-time cleaning woman for a while before finding work as a kindergarten teacher's assistant. 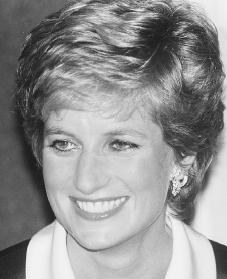 The girl next door

Although Prince Charles had known Diana almost all her life, he thought of her as a playmate for his younger brothers. He later dated Diana's older sister, Lady Sarah. Lady Sarah reintroduced Charles and Diana in 1977. "[Diana] taught him how to tap-dance on the terrace," a family friend once told McCall's. "He thought she was adorable … full of vitality (liveliness) and terribly sweet." Charles was struck by "what a very amusing and jolly and attractive 16-year-old she was," Time reported. Diana concluded that the prince was "pretty amazing."

However, Charles thought Diana was too young to consider as a marriage prospect and the romance didn't bloom for another three years. In July 1980 Diana visited the royal family's Balmoral Castle in Scotland to see her sister, Lady Jane, who was married to Robert Fellowes, the queen's assistant secretary. Once again Diana ran into Charles, and the two walked and fished together. Charles was quoted as saying in Time, "I began to realize what was going on in my mind and hers in particular." Diana was invited back in September. Soon afterward, reporters began to suspect the nature of her relationship with Charles and began to follow Diana constantly.

Charles proposed to Diana during dinner in his Buckingham Palace apartment in February 1981. Diana was the first British citizen to marry the heir to the throne since 1659. Since Diana was an Anglican, there were no legal obstacles to marry the man who, as king, would head the Church of England. In addition, a well-known saying soon made the rounds in the press: Diana had a history, but no past. This was very important to the royal family. Diana resigned her teaching post and moved into the palace's Clarence House with the Queen Mother, where she was instructed in how to conduct herself as a member of the royal family.

The Archbishop of Canterbury and twenty-five other members of the clergy took part in the wedding of Prince Charles and Lady Diana on July 29, 1981. There were twenty-five hundred people in the church, and a worldwide TV audience of about 750 million watched the ceremony under the dome of St. Paul's Cathedral. Five mounted military police officers led Diana in her glass coach from Clarence House to St. Paul's. Two million spectators—whose behavior was kept in check by 4,000 policemen and 2,228 soldiers—jammed the processional route.

Life as a princess

The public loved Diana, and after the wedding her life became an endless round of public appearances, with 170 official engagements during the first year alone. In their first seven years of marriage, the Prince and Princess of Wales made official visits to nineteen countries and held hundreds of handshaking sessions. Their first son, Prince William, nicknamed Wills, was born in June of 1982. Their second son, Harry, was born two years later in September of 1984. The boys were sometimes referred to as "the heir and the spare." Diana was said to be a caring mother, trying to raise the children as normally as possible.

Over the years, Diana became involved in many charitable causes. She called attention to the problems of homelessness and drug abuse, shook hands with patients at an AIDS (acquired immune deficiency syndrome; a disease that affects the immune system) ward in a Middlesex hospital, and once visited victims of an Irish Republican Army (IRA) bombing in Northern Ireland. In 1990, People magazine noted, Diana was involved with forty-four charities, making more than 180 visits on their behalf the previous year. "I don't just want to be a name on a letterhead," the princess was quoted as saying in the Saturday Evening Post.

Problems in the marriage

Rumors of problems between the royal couple surfaced just a few years after the wedding. Many reports stated that Charles quickly lost interest in his bride and that he spent too much time gardening. Diana was said to be self-absorbed and too interested in clothes. Others noted problems such as the couple's age difference and their different interests. Charles enjoyed polo and horseback riding; Diana once fell off a horse and lost interest in riding afterward. He enjoyed opera; she preferred ballet and rock music. Charles's friendship with Camilla Parker Bowles, a woman he had once asked to marry him, was also seen as a problem. The media began tracking the number of days the two spent apart, noting Charles's long stays away from home.

In December 1992 it was formally announced that the royal couple was separating. In 1993 Diana announced that in an attempt to avoid the constant media coverage of her activities, she would be withdrawing from public life, though she would continue her charity work. In 1994, in an unusually honest interview, Prince Charles admitted his relationship with Camilla Parker Bowles, though he claimed it began only after his marriage had completely broken down. In November 1995, Diana responded with a television interview of her own. This raised eyebrows because Diana had informed Queen Elizabeth of the interview only after it had already taken place, and just days before it was scheduled to be broadcast.

Shortly thereafter, the Queen asked the couple to consider a divorce. On February 29, 1996, Diana gave her consent to a divorce—though again she went against tradition by not informing the Queen first. Terms of the divorce were announced in July 1996. Diana would be involved in all decisions about the children and the couple would share access to them, she would remain at Kensington Palace, and she would be known as Diana, Princess of Wales. She would lose the prefix H.R.H. (Her Royal Highness) and any right to the British throne. However, she kept all her jewelry and received a settlement of almost $23 million, and Charles agreed to pay the costs of maintaining her private office.

Diana continued her role as Princess of Wales after the divorce. She visited terminally ill people in hospitals, traveled to Bosnia to meet the victims of land mines, and met Mother Teresa in New York City's South Bronx in June 1997. Romantically, the press linked her with Dodi al Fayed, whose father owned Harrods Department Store in London. On August 31, 1997, photographers followed the couple after they had dined in Paris. The combination of pursuing reporters, driving at a high rate of speed, and a drunk driver led to an automobile accident. Some witnesses stated that photographers snapped pictures and interfered with police officers and rescue workers at the scene. The driver and Fayed died at the scene; Princess Diana died from her injuries a few hours later.

The world mourned for "the people's princess." People waited up to eight hours to sign books of sympathy at St. James Palace, and one-hundred thousand people a day passed through Kensington Palace, where Diana lived. Her mother stated, "I thank God for the gift of Diana and for all her loving and giving. I give her back to Him, with my love, pride and admiration to rest in peace." Queen Elizabeth II went on live television and said of Diana, "She was an exceptional and gifted human being." It was estimated that 2.5 billion people watched Princess Diana's funeral on television, nearly half the population of the world.

Also read article about Diana, Princess of Wales from Wikipedia

i was wrong when i said diana was no where near as wel-known or deserving the affection diana received from the public. from your web page report it indicates 2.5 billion people wathced her funeral. this is alarming.

i do apologise for not recognizing her relationship with her supporters / fans / admirers / sympathisers.

i had today come across spoken information that had denegrated her but did not invovle myself in these matters.

the essence of the picture is that one has to reason for themselves if they did anything unlike their own expectations. people living in glass houses should not throw rocks.

in diana's case the evidence is there with 2.5 billion people you said watched her funeral goes further than a mile to proof she was and remains well liked.
2
Hibernia

Diana moved into Buckingham Palace as soon as she was engaged. She didn't move into Clarence House and the Queen Mother did not tutor her. She met Charles in Sussex in July at a barbeque. The royal family don't go to Scotland in July but in August and September. It was there she was spotted by the press with Charles. She wasn't a teacher but a part-time assistant at a kindergarten and she also looked after an American baby boy.