The Spanish explorer Hernando de Soto participated in the conquests of Nicaragua (in Middle America) and Peru (in South America). De Soto explored parts of nine states in the southeastern part of the United States, and he was the first white man to cross the Mississippi River.

Hernando de Soto was born sometime between 1496 and 1501 at Jerez de los Caballeros in the province of Estremadura, Spain. He was born into a family with minor nobility and little money as the second son of Francisco Mendez de Soto and Leonor Arias Tinoco. His education was limited; he was more interested in adventure and exploration. With little more than a sword and shield he sailed to Central America in 1514 with Pedro Arias de Ávila (c. 1440–1531), known as Pedrarias, who was about to become the governor of Panama.

As Pedrarias's lieutenant, de Soto was allowed to explore Central America in search of treasure and land. Among the areas he explored in the 1520s were modern Costa Rica and Honduras. De Soto conquered Nicaragua in 1524, and along with Hernan Ponce de Leon and Francisco Companon, he became a leading citizen of that country. De Soto was ambitious and wanted the chance to rule a country, but Pedrarias blocked his attempts to achieve more power in Nicaragua.

Sailing from Nicaragua in 1531, de Soto joined Francisco Pizarro (1471–1541) in the conquest of Peru, becoming an important figure in the fight. He was the first Spaniard to meet the Inca leader Atahualpa (c. 1500–1533), who had led the victory of a recent civil war in Peru. Atahualpa had great wealth, and he gave many gifts to de Soto. Pizarro later had Atahualpa killed while de Soto was on a scouting mission. Although de Soto emerged from the conquest with a reputation as a skilled horseman and "one of the four bravest captains who had gone to the West Indies," he was upset that Pizarro had killed Atahualpa. He also felt he would never be given the opportunity to provide leadership to a country.

With fame and a fortune of 100 thousand pesos in gold, de Soto returned to Spain in 1536, where he married Isabella de Bobadilla, one of Pedrarias's daughters. De Soto was very interested in starting up a new expedition. He got his chance when Emperor Charles V of Spain (1500–1558) rewarded him for his efforts in Peru with a title as governor of Cuba and the authority to explore, conquer, and set up colonies (at his own expense) in the entire region that is now the southern part of the United States. De Soto returned to Cuba in 1538, where he assumed the governorship and prepared for his expedition to Florida.

An explorer until the end

Hoping to find another Peru, de Soto and 620 men landed south of modern Tampa Bay, Florida, on May 30, 1539. His party encountered a man named Juan Ortiz, a survivor of an earlier failed expedition to Florida, who had lived among the Indians for twelve years. With Ortiz acting as interpreter, de Soto began his search for treasure and an advanced Indian civilization. Marching up the west coast of Florida, he spent the winter near the 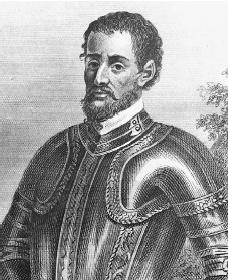 Hernando de Soto.
Courtesy of the
Library of Congress
.
present site of Tallahassee. In 1540 de Soto resumed the march through Georgia. At the Savannah River he met an Indian woman who offered him a long string of pearls and told him more could be found in nearby burial grounds. After collecting 350 pounds of pearls, the party continued northward into present-day South and North Carolina, across the Smoky Mountains into Tennessee, and southward into Georgia and Alabama. Their fiercest battle with Indians, which resulted in the loss of many men as well as the pearls, occurred in southeastern Alabama.

De Soto and his followers, anxious to find riches, set out once again to the north-west into northern Mississippi. In May 1541 de Soto sighted the Mississippi River south of current-day Memphis, Tennessee. After crossing the Mississippi he explored Arkansas, and established his winter quarters near the present site of Fort Smith. Having made up his mind to return to the sea, he reached the mouth of the Arkansas River, where he died of fever on May 21, 1542. De Soto's men wrapped his body in cloaks packed with sand and cast it into the river. The 311 survivors of the expedition, under Luis de Moscoso, floated down the Mississippi and coasted along the Gulf shore until they reached Tampico, Mexico, in September 1543.

Could you tell me HOW de Soto crossed the Mississippi River?
2
jaysi

can you write about his life in south america and what he did?
3
Anonymous

this guy was actually pretty brutal. he pillaged and killed everything in sight.
4
Bruce

They built 2 huge rafts out of wood and floated across. With 600 solders,horses,equipment, and dogs I imagine this took a few trips. They dissembled and reassembled these rafts, and carried them for other rivers.
5
bratwarts

what area of new birth did he explore? also did he dicover?
6
anonamos

what was his early life like?? what about his other family members???
7
anonymous

He died in 1542. He had a wife, but no kids as far as history goes. After he died of Scarlet Fever, his crew members soaked his body in the river that he found. He went on his overseas voyage to search for gold, but he never found it. He returned to his homeland and got a wife in 1540, then died. His body was wrapped in black silk shrouds, stuffed into a tree trunk. and cast down the Mississippi River.
8
Anonymous

Hernando de Soto died of a fever. I don't know if he had any enemy's though.