Deng Xiaoping became the most powerful leader in the People's Republic of China (PRC) in the 1970s. He served as the chairman of the Communist Party's Military Commission and was the chief architect of China's economic improvements during the 1980s.

Deng Xiaoping was born Deng Xixian in Guangan, Sichuan Province, on August 22, 1904. His parents were Deng Wenming, a relatively well-to-do landowner, and the second of his four wives, Deng Danshi. Deng grew up with one sister, two brothers, and the children of his father's other wives. He joined the Chinese Communist Party (CCP) in 1924 while on a high school work-study program in France. (Communism is a political system where goods and services are controlled by the government.) Before returning to China in 1926 he went to Moscow, where he studied for several months.

During the fabled Long March of 1934 and 1935, when Communist Chinese traveled six thousand miles to set up a home in inland China, Deng served first as director of the political department. After the war with Japan began in 1937 Deng was appointed political commissar (party official) of the 129th Division. The force grew into a large military machine and became one of the four largest Communist army units during the war. It was renamed the Second Field Army in 1946 when the civil war began.

Deng rose quickly in the leadership hierarchy after his transfer to Peking, China, in 1952. He became CCP secretary-general in 1954 and a member of the Politburo (ruling party). During the Eighth CCP Congress in 1956 Deng was elevated to the six-man Politburo Standing Committee and appointed general secretary. By then, he had become one of the most powerful men in China.

By many accounts Deng was an able, talented, and intelligent man. He was nicknamed "a living encyclopedia" by his peers. Chairman Mao Zedong (1893–1976), the creator of the People's Republic of China (PRC), pointed out Deng's abilities to Nikita Khrushchev (1894– 1971) of the Soviet Union, the former Communist country which consisted of Russia and other states. Deng visited the Soviet Union several times in the 1950s and the 1960s, as he was closely involved in Chinese-Soviet relations and their dispute over the international communist movement. 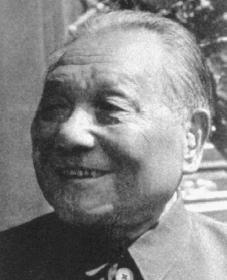 Deng Xiaoping.
development and other policies. Mao disapproved of Deng for making decisions without consulting him. In 1966 Mao launched the Great Proletarian Cultural Revolution (GPCR) and mobilized the youthful Red Guards (the Communist army) to rid the party of "capitalist powerholders," such as Deng. From 1969 to 1973, Deng and his family were exiled (forced to leave) to rural Jiangxi to undergo reeducation, during which time he performed manual labor and studied the writings of Mao and Karl Marx (1818–1893).

In the spring of 1973 Deng was brought back to Peking and reinstated as a vice-premier after a major realignment of political forces. Deng's ability and expertise were highly valued in the Chinese leadership, and he quickly assumed important roles. In late 1973 he carried out a major reorganization of regional military leaders and was elevated to the Politburo.

As Premier Chou Enlai was hospitalized after May 1974, leadership increasingly fell on Deng's shoulders. In January 1975 Deng was elevated to a party vice-chairman, the senior vice-premier, and the army chief of staff. However, Deng's eagerness to carry out political reforms (improvements) pushed away Mao and other radicals, and Deng was soon forced from power.

After Mao's death in July 1977, Deng began his political comeback. His first task was to destroy Mao's followers and to downgrade Mao's lasting authority. Another powerful measure of de-Maoization was to put the "Gang of Four" on public trial, which began in Peking on November 20, 1980. These four radical leaders, including Mao's widow Chiang Ch'ing, were the late chairman's most devoted supporters. The trial symbolized the triumph of veteran officials, led by Deng, who had fallen victim to Mao's radical changes between 1966 and 1976.

Deng's economic policies required opening China to the rest of the world in order to attract foreign investment and to educate students abroad in the latest technologies. Accordingly, the PRC in 1978 signed a Treaty of Peace and Friendship with Japan. In 1979, Deng obtained the nation's official recognition from the United States. Chinese-Soviet relations were gradually improved over the next decade, and he achieved the long-cherished goal of recovering the British colony of Hong Kong through an agreement implemented in 1997.

When the Chinese economy began to crumble, Deng reduced investment in heavy industry, increased prices paid by the state to farmers, and arranged a series of bonuses to raise workers' incomes. Farmers were encouraged to sell more produce privately, and a rapid growth of free markets for farm produce occurred.

Throughout these reforms, Deng insisted upon maintaining China's socialist system (a social system where the government produces and distributes goods to the people). The reforms Deng installed generally improved the quality of life but produced inequalities throughout China. In the 1980s the economy began to slip; unemployment increased and produced growing difference in living standards between the classes.

In 1979 some of Deng's supporters had openly opposed his dictatorship (one ruler with absolute power) and called for a democratic political system. Deng himself shut down this democracy movement by imprisoning some of their leaders, and banning unofficial organizations and publications. In December of 1986, widespread student demonstrations (protests) were shut down by the government.

Deng's insistence through the 1980s on maintaining China's socialist system while putting his economic reforms into place had by 1989 forced him into a corner. Focusing on demands for greater democracy (a government by the people), a series of student demonstrations at Tiananmen Square occurred during Soviet leader Mikhail Gorbachev's (1931–) official state visit to Beijing and proved a serious embarrassment to China's leaders—one made worse by worldwide television coverage. The violence that followed on June 4, 1989, is believed to have killed hundreds of demonstrators in Beijing alone.

Worldwide criticism of the massacre in Tiananmen Square and the uneasy domestic peace that followed brought a tightening of controls over the Chinese people, but did not shake Deng from his dedication to the Communist Party's dictatorship. Recognizing his advanced age, Deng sought to continue his "open door" policy and other political and economic reforms by putting CCP General Secretary Hu Yaobang, Premier Zhao Ziyang, and many other younger officials in positions of responsibility. In November of 1989, Deng resigned his last official position as head of the Central Military Commission.

In his last years Deng started debate within the Communist Party on the need to balance economic reform with political stability. As Deng's health declined, he became further removed from his duties of daily decision-making. His last public appearance was during lunar new year festivities in early 1994, and on February 19, 1997, he died in Peking, China, at age ninety-two.