The French thinker René Descartes is called the father of modern philosophy (the study of the universe and man's place in it). His Discourse on Method and Meditations defined the basic problems of philosophy for at least a century.

René Descartes was born on March 31, 1596, in La Haye, France. His father, Joachim, served in the Parliament of Brittany, France. Jeanne Brochard Descartes, his mother, died in 1597. His father remarried and René and his older brother and sister were raised by their maternal grandmother and by a nurse for whom he retained a deep affection. In 1606 Descartes entered La Flèche, a religious college established for the education of the sons of noblemen. As a child he was often ill and was allowed to spend a portion of each day studying in bed. He used this time for meditation and thought. According to Descartes's description of his eight-year course of studies at La Flèche, he often felt embarrassed at the extent of his own ignorance.

After leaving college at age eighteen, Descartes earned a law degree in Poitiers, France. From 1618 to 1628 he traveled throughout Europe as a soldier. Living on income from inherited properties, Descartes served without pay and saw little action. He was present, however, at one of the major battles of the Thirty Years War (1618–48). Descartes sought out famous mathematicians, scientists, and philosophers (those who seek wisdom) wherever he traveled. The most significant of these friendships was with Isaac Beeckman, a Dutch mathematician, who encouraged Descartes to begin writing scientific theories on mathematics and music.

Descartes was deeply influenced by three dreams he had in 1619 in Ulm, Germany. He interpreted them to mean that all science is one and that its mastery is universal wisdom. This idea of the unity of all science was in opposition to the belief that the sciences were distinguished by their different objects of study. Descartes felt that if one could draw conclusions from a correct method of reasoning, then one could know everything. He began to devote his efforts to proving that he had discovered such a method. To focus better on his work, Descartes moved to Holland, where he lived peacefully for the next twenty years.

Descartes's first major work, Rules for the Direction of the Mind, was written by 1629 but was not published until 1701. The work begins by assuming that man's knowledge has been limited by the belief that science is determined by the various objects of experience. The first rule therefore states that all true judgment depends on reason alone. For example, mathematical truths are valid even without observation and experiment. The second rule argues that the standard for true knowledge should be the certainty demanded of mathematical demonstrations. The third rule states that the mind should be influenced only by what can clearly be observed. The remaining rules are devoted to the explanation of these ideas or to showing their use in mathematical problems.

By 1634 Descartes had written The World, in which he supported several theories, including the idea of Nicolaus Copernicus (1473–1543) that Earth is not the center of the universe but revolves around the sun. Only fragments of the book survive, because when Descartes heard that a book published by Galileo (1564–1642), which also supported Copernicus, had been condemned by the Catholic Church, his fear of similar treatment led him to withdraw his work. In 1634 he also wrote the brief Treatise on Man, which attempted to explain human physiology (a branch of biology dealing with organs, tissues, and cells).

In 1637 Descartes finished Discourse on Method, which uses a personal account of his education as an example of the need for a new method of study. Descartes also presents four rules for reducing any problem to its basics and then constructing solutions. In 1641 and 1642 Meditations on First Philosophy 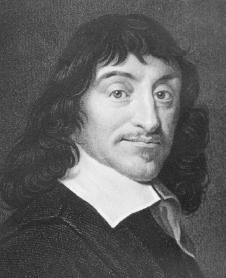 René Descartes.
Courtesy of the
Library of Congress
.
appeared together with six sets of objections by other famous thinkers. The Meditations is one of the most famous books in the history of philosophy. While earlier Descartes works were concerned with explaining a method of thinking, this work applies that method to the problems of philosophy, including the convincing of doubters, the existence of the human soul, the nature of God, and the basis of truth.

The remainder of Descartes's career was spent defending his positions. In 1644 he published the Principles of Philosophy, which breaks down and expands the arguments of the earlier Meditations. In 1649 Descartes accepted an invitation from Queen Christina of Sweden (1626–1689) to become her teacher. During this time he wrote The Passions of the Soul, which explains passion as a product of physical and chemical processes. The weather in Sweden caused Descartes's health to suffer, however, and after a brief illness he died in Stockholm in 1650.