Marie Sklodowska Curie was born in Warsaw, Poland, on November 7, 1867, the youngest of five children of Wladislaw and Bronislava Boguska Sklodowska. After her father lost his job, the family struggled and was forced to take borders (renters) into their small apartment. Religious as a child, Curie rejected her faith after her sister died of typhus (a severe fever) in 1876. Two years later she lost her mother to tuberculosis, a terrible disease that attacks the lungs and bones.

Marie was a brilliant student, gaining a gold medal upon completing her secondary education in 1883. As girls could not attend universities in Russian-dominated Poland, Marie spent a year in the country with friends at her father's suggestion. Upon returning to her father's house in Warsaw the next summer, she began to earn her living through private tutoring. She also became associated with the "Floating University," a group of young men and women who tried to quench their thirst for knowledge in secret sessions.

In early 1886 Marie accepted a job as governess (private educator) with a family living in Szczuki, Poland, but the intellectual loneliness she experienced there only solidified her determination to somehow achieve her dream of becoming a university student. One of her sisters, Bronya, was already in Paris, France, successfully passing the examinations in medicine. In September 1891 Marie moved in with her sister in Paris.

When classes began at the Sorbonne in Paris in early November 1891, Marie enrolled as a student of physics. By 1894 she was desperately looking for a laboratory where she could work on her research project, the measurement of the magnetic properties of various steel alloys (metal mixtures). Acting upon a suggestion, she visited Pierre Curie at the School of Physics and Chemistry at the University of Paris. In 1895 Pierre and Marie were married, thus beginning a most extraordinary partnership in scientific work.

By mid-1897 Curie's scientific achievements were two university degrees, a fellowship (a scholarship), and a monograph (published paper) on the magnetization of tempered steel. The couple's first daughter, Irène, had just been born, and it was then that the Curies turned their attention to the mysterious radiation from uranium recently discovered by Antoine Henri Becquerel (1852–1908). It was Marie's hunch that the radiation was an atomic property, and therefore had to be present in some other elements as well. Her search soon established the fact of a similar radiation from thorium, and she invented the historic word "radioactivity" (the spontaneous release of radium).

While searching for other sources of radioactivity, the Curies had turned their attention to pitchblende, a mineral well known for its uranium content. To their immense surprise the radioactivity of pitchblende far exceeded the combined radioactivity of the uranium and thorium contained in it. From their laboratory two papers reached the Academy of Sciences within six months. The first, read at the meeting of July 18, 1898, announced the discovery of a new radioactive element, which the Curies named polonium after Marie's native country. The other paper, announcing the discovery of radium, was read at the December 26 meeting.

From 1898 to 1902 the Curies converted several tons of pitchblende, but it was not only the extremely precious centigrams of radium that rewarded their superhuman efforts. The Curies also published, jointly or separately, during those years a total of thirty-two scientific papers. Among them, one announced that diseased, tumor-forming cells were destroyed faster than healthy cells when exposed to radium.

In November 1903 the Royal Society of London gave the Curies one of its highest awards, the Davy Medal. A month later followed the announcement from the Nobel Foundation in Stockholm, Sweden, that three French scientists, A. H. Becquerel and the Curies, were the joint recipients of the Nobel Prize in Physics for 1903. Finally, even 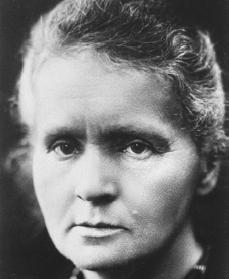 Marie Curie.
Courtesy of the
Library of Congress
.
the academics in Paris began to stir, and a few months later Marie was appointed director of research at the University of Paris.

In December 1904 their second daughter, Ève, was born. The next year brought the election of Pierre to the Academy of Sciences and their travel to Stockholm, where, on June 6, he delivered the Nobel Prize lecture, which was in fact their joint address. Pierre ended his speech with the double-edged impact on mankind of every major scientific advance. Pierre said that he believed "mankind will derive more good than harm from the new discoveries."

End of an era

The joyful time for this husband-and-wife team would not last long. On the rainy mid-afternoon of April 19, 1906, Pierre was run down by a heavy carriage and killed instantly. Two weeks later the widow was asked to take over her late husband's post. Honors began to pour in from scientific societies all over the world on a woman left alone with two small children and with whom the gigantic task of leadership in radioactivity research was now left. In 1908 she edited the collected works of her late husband, and in 1910 she published her massive Traité de radioactivité. Shortly after this work Curie received her second Nobel Prize, this time in chemistry. Still, Curie was unable to win over the Academy of Sciences, who once again denied her membership.

Curie devoted much of her time during World War I (1914–18) to equipping automobiles in her own laboratory, the Radium Institute, with x-ray (Roentgen) apparatus to assist the sick. It was these cars that became known in the war zone as "little Curies." By the end of the war Curie was past her fiftieth year, with much of her physical energy already spent—along with her savings, which she had patriotically invested in war bonds. But her dedication was inexhaustible. The year 1919 witnessed her installation at the Radium Institute, and two years later her book La Radiologie et la guerre was published. In it she gave a most informative account of the scientific and human experiences gained for radiology (the use of radiation) during the war. At the end of the war, her daughter Irène, a physicist, was appointed as an assistant in her mother's laboratory.

Shortly afterward, a momentous visit took place in the Radium Institute. The visitor was Mrs. William B. Meloney, editor of a leading magazine in New York and representative of the countless women who for years had found in Curie their ideal and inspiration. A year later Meloney returned to tell Curie that a nationwide subscription in America had produced the sum of one hundred thousand dollars, which was needed to purchase a gram of radium for her institute. She was also asked to visit the United States with her daughters and collect the precious gift in person. Her trip was an absolute triumph. In the White House, President Warren G. Harding (1865–1923) presented her with the golden key to the little metal box containing the radium.

On questions other than scientific, Curie rarely uttered public comment of any length. One of the exceptions was her statement at a conference in 1933 on "The Future of Culture." There she rallied to the defense of science, which several panelists held responsible for the dehumanization of modern life. "I am among those," she emphasized, "who think that science has great beauty. A scientist in his laboratory is not only a technician; he is also a child placed before natural phenomena which impress him like a fairy tale. We should not allow it to be believed that all scientific progress can be reduced to mechanism, machines, gearings, even though such machinery also has its own beauty."

The most heartwarming experience of the last phase of Curie's life was probably the marriage of her daughter Irène in 1926 to Frédéric Joliot (later Joliot-Curie), the most gifted assistant at the Radium Institute. Before long it was evident to her that their union would closely resemble her own marvelously creative partnership with Pierre Curie.

She worked almost to the very end and succeeded in completing the manuscript of her last book, Radioactivité. In the last years her younger daughter, Ève, was her great support. Ève was also her mother's faithful companion when, on July 4, 1934, Curie died in Sancellemoz, France. Albert Einstein (1879–1955) once said, "Marie Curie is, of all celebrated beings, the only one whom fame has not corrupted."

this is credible info. i used this for my bio on marie @ school, it's good! (especially if your just doing a quick reference to her life)