Walter Cronkite is an American journalist and radio and television news broadcaster who became one of an outstanding group of correspondents and commentators that the Columbia Broadcasting System (CBS) News developed after World War II (1939–45; a war in which Germany, Italy, and Japan fought against Great Britain, France, the Soviet Union, and the United States).

Walter Leland Cronkite was born on November 4, 1916. He was an only child. His father was a dentist and his mother, Helena Lena (Fritsch) managed the home. While he was still a youngster the family moved to Texas, where his father took a position at the University of Texas Dental School. During that time Walter read an article in American Boy magazine about the adventures of reporters working around the world. It inspired his interest in journalism and he decided when he was in junior high school that he wanted to be a reporter. His preparation for that career began with his work on his high school yearbook and newspaper. He was also active in student government and athletics, particularly track.

In 1933 Cronkite entered the University of Texas at Austin, where he studied political science, economics, and journalism. He took a part-time job with the Houston Post newspaper. This set him on a professional career which led him to leave college after two years to serve in several different journalism jobs, including general reporter for the Post, radio announcer in Kansas City, Missouri, and sportscaster in Oklahoma City, Oklahoma. After Cronkite's time at the Post, his principal employer for several years was United Press International (UPI). He covered World War II in Europe. He also served as chief correspondent at the Nuremburg war crimes trials (1945–46), and as head of the Moscow (Russia) office from 1946 to 1948.

In 1950 Cronkite joined CBS News. Up to this point he was largely unknown to the general public. Two years later he was narrator for You Are There, a television program in which major historical events were recreated as though they were current news events. In 1954 he became narrator of The Twentieth Century, an outstanding television documentary recounting the events of recent history. This job gave Cronkite recognition with the viewing public.

Starting in 1952 Cronkite also served as the anchor for the CBS coverage of the Democratic and Republican national presidential conventions. With the exception of the 1964 Democratic convention, he continued this role until his retirement in 1981.

Cronkite assumed the duties of anchor and editor for the CBS Evening News in 1962. At that time the National Broadcasting Company's (NBC) Huntley-Brinkley Report, hosted by Chet Huntley and David Brinkley, led viewer ratings. Gradually, the CBS broadcasts gained ground on the team at NBC, which broke up in 1970. From that time until his retirement, Cronkite's program was consistently the most popular television news broadcast.

Although the evening news was Cronkite's main responsibility, he maintained his leading role as narrator and correspondent on network specials. These included 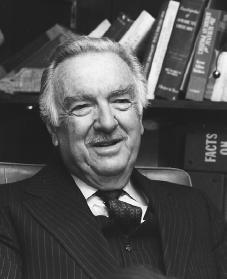 Walter Cronkite.
Reproduced by permission of
AP/Wide World Photos
.
space shots, major documentaries, and interviews with world figures such as presidents Harry Truman (1884–1972), Dwight Eisenhower (1890–1969), and Lyndon Johnson (1908–1973). After his retirement he continued this role in addition to the periodic series, Walter Cronkite's Universe.

For a society that emphasized youthfulness, it was a paradox (contradiction) that Cronkite's reputation increased as he grew older. His white hair and mustache gave him a distinguished look. Cronkite's reputation did not rest on appearance, however. He earned recognition and praise through hard work, a passion for accuracy, and an insistence on impartiality (being neutral). Underlying that was a lifelong competitive spirit, which was moderated in front of the microphone and camera but which came out in his leisure activities of sailing, tennis, and race car driving.

Strengths as a reporter

Cronkite was quite concerned with not becoming part of the story he was reporting. He stated, "I built my reputation on honest, straight-forward reporting. To do anything else would be phony. I'd be selling myself and not the news." Yet there were memorable instances when he failed to remain completely separated from a story, such as his obvious emotional reaction when announcing the death of President John F. Kennedy (1917–1963); his broadcast pronouncement in 1968, upon returning from Vietnam, that he doubted United States policy for that region could succeed; and his undeniable enthusiasm when Neil Armstrong (1930–) became the first person on the moon in 1969.

Despite Cronkite's philosophy of detachment, he sometimes influenced the news, as in his 1977 televised interview with Egyptian leader Anwar Sadat (1918–1981), which led Sadat to visit Israel and led Israeli Prime Minister Menachem Begin (1913–1992) to visit Egypt. Cronkite was an unintentional news topic in 1980, when John Anderson (1922–), running as an independent presidential candidate, mentioned Cronkite as his likely running mate. (Former Wisconsin governor Patrick Lucey wound up as Anderson's choice.)

The depth of respect for Cronkite's work is reflected in the numerous awards he has received: the Peabody for Radio and Television, the William Allen White Award for Journalistic Merit, as well as the Emmy. In 1981, during his final three months on the CBS Evening News, Cronkite received eleven major awards, including the Presidential Medal of Freedom. In 1985 he became the second newsman, after Edward R. Murrow (1908–1965), to be selected for the Television Hall of Fame. At his retirement Cronkite was the most commonly mentioned person on the "dream list" for lecturers at conventions, clubs, and college campuses.

After retiring as anchor of the CBS Evening News, Cronkite served as CBS News special correspondent and on the network's board of directors from 1981 to 1991. He also anchored the CBS News science magazine series Walter Cronkite's Universe, (1980–82). From the late 1980s until 1992 he hosted Walter Cronkite's 20th Century, a daily, ninety-second account of same-day historical events.

In 1993 Cronkite formed his own production company and produced several award-winning documentaries for The Discovery Channel, the Public Broadcasting Service (PBS), and other networks. One of those, Cronkite Remembers, aired in early 1997 in conjunction with the late 1996 publication of his autobiography, A Reporter's Life. During the 1996 presidential campaign, Cronkite headed efforts to convince networks to offer free television time for presidential candidates.

In 2001 Cronkite published Around America: A Tour of our Magnificent Coastline. He also signed on to do the voice of Ben Franklin in a new PBS animated series, Liberty Kids.

Cronkite raised television news broad casting to a level of professionalism that was praised around the world. His qualifications as a newspaperman and war correspondent, along with his unwillingness to stray from a hard news format that dealt only with impor tant events and their facts, demonstrated that acceptance and popularity in television news need not rest on covering trivial topics. Wal ter Cronkite continues to be admired by both his colleagues and by his audience. For many people he is the example of what a broadcast journalist should be.

Cronkite, Kathy. On the Edge of the Spotlight. New York: Morrow, 1981.

what an awesome documentary!
this really helped me with my journalism report that will be published in the Herald Tribune next week!