Schooled in low-budget filmmaking, Francis Ford Coppola has gone on to direct some of the most financially successful and critically praised movies in U.S. cinematic history, including The Godfather and Apocalypse Now.

Francis Ford Coppola was born in Detroit, Michigan, on April 7, 1939. His father, Carmine, was a musician who played with Arturo Toscanini's NBC Symphony Orchestra. His mother, Italia, was an actress who at one time had appeared in films. Coppola's younger sister, Talia, would later follow her mother's footsteps into the world of film acting, changing her name to Talia Shire and starring in the film Rocky, with Sylvester Stallone 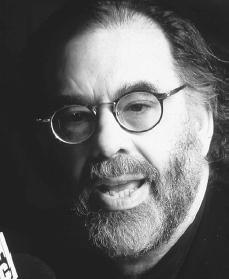 Francis Ford Coppola.
Reproduced by permission of
Archive Photos, Inc.
(1946–). A few years after his birth, Coppola and his family moved to the suburbs of New York City, where he would spend most of his childhood.

All of the Coppola children were driven to succeed in show business and the arts. Coppola's father, who had achieved success as a musician for hire but longed to compose scores (write music) of his own, led by example. Francis seemed the least likely to fulfill his father's dreams, however. He was an awkward child who did poorly at school. At age nine he was stricken with polio, a crippling disease that usually occurs in children. The illness forced him into bed for a year, a period during which he played with puppets, watched television, and became lost in an inner fantasy world. After his recovery he began to make movies with an eight-millimeter camera and a tape recorder. Francis was fascinated by movies as a child. Some of his favorites were Dracula, The Thief of Baghdad, and Walt Disney cartoons.

While a student at Great Neck High School on Long Island, Coppola began to study filmmaking more formally. He soon became enchanted with the work of director Sergei Eisenstein (1898–1948). Coppola also trained in music and theater to round out his education. In 1956 he enrolled at Hofstra College in Hempstead, New York, on a drama scholarship. Here he acted in and directed student productions, and he founded his own cinema (movie) workshop. So determined was Coppola to direct his own pictures that he once sold his car to pay for a 16-millimeter camera.

After graduating from Hofstra, Coppola moved to the West Coast to attend film school at the University of California in Los Angeles, California. But he was impatient to escape the classroom and start making his own films. He signed on to direct an adult movie, which caught the attention of low-budget director Roger Corman. Corman hired Coppola to work on his movies as a jack-of-all-trades (a person who can do many different jobs). Coppola's strong work ethic prompted Corman to allow him to direct his own picture. The result was Dementia 13 (1963), a gory horror movie Coppola had written in three days and shot for forty thousand dollars. That year Coppola married Eleanor Neil, his set decorator on the picture.

Warner Brothers selected the promising young filmmaker to direct their big-budget musical Finian's Rainbow. But the subject matter took Coppola away from his strengths and the film was panned (not favorably reviewed) by critics. The Rain People (1969) represented Coppola's attempt to return to "personal," not to mention low-budget, moviemaking. A travelogue about a housewife on the run, the movie was made up as the crew went along, evidence of Coppola's flair for the experimental.

Coppola might have remained in an avant-garde (inventive and experimental) rut were it not for his next project. As cowriter of the mega-hit Patton, Coppola earned an Academy Award and quickly restored his reputation. Paramount Pictures next asked him to direct its screen adaptation of Mario Puzo's best-selling novel, The Godfather. It would prove to be Coppola's greatest triumph.

Glory gained from The Godfather

Filming The Godfather posed many challenges. Coppola fought hard to control the casting decisions. He also resisted studio attempts to cut his budget and to update the setting. Italian American groups protested the depiction of organized crime in the original screenplay. Even Coppola's own crew at times lost faith in his ability to control the enormous project. Nevertheless, he steered the movie to completion.

The Godfather tells the sweeping story of the Corleone crime family, focusing on the rise of young Michael Corleone to control of the family's empire. Propelling the drama forward are powerful performances by Marlon Brando (1924–) and newcomer Al Pacino (1940–). After its release in 1972, critics were floored by the film's depiction of America's criminal underworld. The film became a sensational hit with moviegoers as well, and The Godfather swept the Academy Awards that year. Coppola was a winner in the Best Director and Best Screenplay categories.

Now a wealthy man thanks to the success of The Godfather, Coppola could at last pick and choose his own projects. In 1974 he made The Conversation, an edgy drama about secret surveillance (observation). Coppola returned to the world of organized crime with 1974's The Godfather Part II, which won him a second Academy Award statuette as Best Director of 1974.

Coppola's next project was Apocalypse Now, a film about the Vietnam War (1955–75; a war fought between United States-aided South Vietnam against the Communist forces of North Vietnam). But the expensive production was slowed by bad weather, budget overruns, and the bizarre behavior of its star, Marlon Brando. When it finally reached the screen in 1979, many critics hailed the film as a masterpiece. It was nominated for several Academy Awards and did well at the box office.

Coppola then moved into the world of independent films, which he released through his own Zoetrope Studio. These pictures, including Rumble Fish (1983) and The Cotton Club (1984), received mixed reviews and had many wondering if Coppola was washed up. He did manage to create a hit with the offbeat Peggy Sue Got Married (1985), a film about a woman who travels back in time to her high school days. The project seemed like a work-for-hire, however. Closer to Coppola's heart was Tucker: The Man and His Dream, a 1988 picture about an automaker who could have been a stand-in for the director himself.

In 1990 Coppola completed The Godfather Part III. While not as praised as the previous two installments, it nevertheless was a box office success and won back the confidence of the major studios. His Bram Stoker's Dracula (1992) received mixed critical response, but helped solidify his comeback.

Out of debt and at ease working for the major studios, Coppola seems content with his cinematic legacy. He expanded his interests into publishing in 1997 with Zoetrope Short Stories, a magazine dedicated to literary, not Hollywood, material.

In 1998 Coppola helped launch the first Classically Independent Film Festival in San Francisco, California. Outside the film industry Coppola is the owner of a California winery that produces wine under the Niebaum-Coppola label. In 2001 Coppola rereleased Apocalypse Now, with an additional forty-nine minutes of footage not included in the original movie. Just like the original, the rerelease was a hit with both critics and the public alike.