An entertainer for many decades, Bill Cosby has starred in live performances and films, recorded albums, written books, and created television shows. His long-running, hugely popular The Cosby Show was in the top of the television ratings from its debut in 1984 through 1992.

William Henry Cosby Jr. was born in Germantown, Pennsylvania, on July 12, 1937, to Anna and William Cosby. One of Cosby's four brothers died at age six. Cosby's father joined the navy and was away from home for months at a time. Cosby, as the oldest son, helped his mother pay the bills by doing odd jobs such as delivering groceries and shining shoes.

Bill was regarded as a comedian even as a child. He particularly enjoyed the comedy of Sid Caesar (1922–). In high school he was captain of the track and football teams, and played basketball and baseball. He tried to keep up with his schoolwork, but he dropped out of high school to join the navy in the early 1950s. Cosby's mother had always stressed the importance of education to her children. She would often read books to them, including Mark Twain (1835–1910) novels and the Bible. Eventually Bill earned his high school diploma through correspondence school and was accepted at Temple University in Philadelphia, Pennsylvania, on an athletic scholarship.

While at Temple Cosby took a job as a bartender in a neighborhood café. The bar had hired a comedian who often did not show up for his act. Cosby filled in, entertaining the crowd with jokes and humorous stories. His reputation as a funny bartender spread throughout the city. Cosby soon got offers to do stand-up comedy in other clubs.

Cosby's humor always focuses on stories about his family, everyday occurrences, boyhood experiences, and commonly held beliefs. He does not do racial humor. He told Newsweek, "I'm trying to reach all the people." Cosby was soon making people laugh in large, well-known nightspots all over the country. He reached a point where his career as a comedian showed more promise than his prospects as a student, so he left Temple in 1962.

Cosby's first album was Bill Cosby Is a Very Funny Fellow … Right! (1963). He won a Grammy Award for it. His second album, I Started Out As a Child, released in 1964, received another Grammy honor as Best Comedy Album of the Year. Each of Cosby's albums earned more than $1 million in sales. His popularity continued and he won consecutive 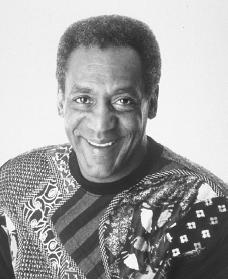 American comedian Allan Sherman (1924–1973) was one of Cosby's biggest fans, as well as his producer. When Sherman filled in for Johnny Carson (1925–) as guest host of The Tonight Show in 1963, he asked Cosby to be his guest. The Tonight Show producers were skeptical about having an African American comic on the show, but Sherman insisted and Cosby was a big hit. Sheldon Leonard, producer of mid-1960s hits including The Danny Thomas Show, The Dick Van Dyke Show, and The Andy Griffith Show, saw The Tonight Show the night Cosby was on. He signed Cosby to play opposite Robert Culp on a new dramatic series. I Spy was an immediate success. It was also the first prime-time television program to star an African American. Cosby won the Emmy Award for Best Actor in a Dramatic Series in 1967, 1968, and 1969.

Cosby's second prime-time series, The Bill Cosby Show, began in 1969, just one year after I Spy went off the air. It was number one in its first season. However, ratings steadily dropped over the next two years, and the show was canceled in the spring of 1971.

Cosby produced Fat Albert and the Cosby Kids as a special in 1971. The show debuted in 1972 as a regular series on Columbia Broadcasting System (CBS). The Saturday afternoon cartoon featured a group of kids living and learning together in an urban (city) area much like the poor section of Philadelphia where Cosby grew up. So that his audience would learn good behavior and solid values, Cosby employed a panel of educators to act as advisers. He also appeared in each episode to discuss its message. The program won a variety of awards, and audience estimates numbered about six million.

Cosby made two more attempts at prime time with The New Bill Cosby Show and Cos in 1972 and 1976, respectively. Both were unsuccessful variety shows that included dancing, skits, and monologue (a comedic or dramatic act read by one person) sessions.

During the mid-1970s Cosby did live performances and recorded comedy albums. Most material on these albums came from Cosby's childhood experiences. Examples include plotting an escape from a bed he had been told was surrounded by thousands of poisonous snakes, having his tonsils out at age five, and having everything he ever made in shop class turn into an ashtray. Cosby also made several films, but they were generally overlooked.

Cosby earned his undergraduate degree from Temple University in 1971. In 1977 he completed his Ph.D. (an advanced degree beyond a master's) in education at the University of Massachusetts, Amherst. Cosby's commitment to education included regular appearances on The Electric Company, produced by the Children's Television Workshop, during the 1970s. He also appeared as the host of the Picturepages segment on Captain Kangaroo in the early 1980s.

By 1984 Cosby had become disappointed with what he saw on television and came up with his own idea for a sitcom (a comedy series). The networks were doubtful, as his last two attempts at prime time were failures. Cosby gave the National Broadcasting Company (NBC) a segment featuring himself as Dr. Heathcliff Huxtable discussing sex with his two teenage daughters. His idea was to have the characters be a happy, middle-class family dealing with everyday problems and incidents. Cosby would play a doctor, who was married to a lawyer. The Cosby Show aired in September 1984 and was an immediate success. It finished the season as the third most watched prime-time television show and was number one for the next four seasons. The show was sold directly to local television stations in October 1988. Cosby, which debuted in the fall of 1996, was the most recent Cosby television show. It was cancelled after four seasons.

Cosby has been his own manager and producer and has written several books, including the best-selling Fatherhood, published in 1986. He also has done a number of television commercials. Cosby and his wife, Camille, have been married since 1964 and have four daughters. A son, Ennis, was tragically killed in 1997 at age twenty-seven. Cosby was inducted into the Television Hall of Fame in 1992. In 1998 he was honored with a Kennedy Center Award for lifetime achievement in the performing arts.

this is really cool!!!
wat ever happened to him anyway?
2
Ann Foster

Which show (of Bill Cosby) was the one in which "Griffith" was his neighbor? Is it aired anywhere now? Or plan to be in the future? Who is the actor who played Griffith? What is "Griffith" doing now?