Aaron Copland was one of the most important figures in American music during the second quarter of the twentieth century, both as a composer (a writer of music) and as a spokesman who was concerned about making Americans aware of the importance of music. He won the Pulitzer Prize for music in 1945.

Aaron Copland was born on November 14, 1900, in Brooklyn, New York, the youngest of five children born to Harris Morris Copland and Sarah Mittenthal Copland. The family lived above a department store, which they owned. One of Copland's sisters showed him how to play piano when he was eleven years old, and soon afterward he began taking lessons from a teacher in the neighborhood. At age fifteen he decided he wanted to be a composer. While attending Boys' High School he began to study music theory beginning in 1917. 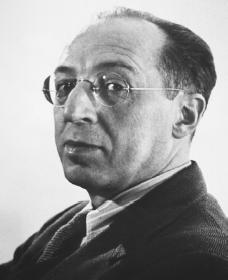 After Copland completed his studies in 1924, he returned to America and composed the Symphony for Organ and Orchestra, his first major work, which Boulanger played in New York City in 1925. Music for the Theater (1925) and a Piano Concerto (1926) explored the possibilities of combining jazz and symphony music. Serge Koussevitzky (1874–1951), conductor of the Boston Symphony Orchestra, became interested in what he heard from the young composer, and he helped gain a wider audience for Copland's—and much of America's—music.

In the late 1920s Copland turned to an increasingly experimental style, featuring irregular rhythms and often jarring sounds. His works were entirely personal; there are no outside influences that can be identified in the Piano Variations (1930), Short Symphony (1933), and Statements. The basic features of these works remained in one way or another central to his musical style in the following years.

The 1920s and 1930s were a period of deep concern about the limited audience for new (and especially American) music, and Copland was active in many organizations devoted to performance and sponsorship. These included the League of Composers, the Copland-Sessions concerts, and the American Composers' Alliance. His organizational abilities earned him the title of "American music's natural president" from his fellow composer Virgil Thomson (1896–1989).

Beginning in the mid-1930s through 1950, Copland made a serious effort to widen the audience for American music and took steps to change his style when writing pieces requested for different occasions. He composed music for theater, ballet, and films, as well as for concert situations. In his ballets— Billy the Kid (1938), Rodeo (1942), and Appalachian Spring (1944; Pulitzer Prize, 1945)—he made use of folk melodies and relaxed his previous style to arrive at a sound more broadly recognized as "American." Other well-known works of this period are El Salón México (1935) and A Lincoln Portrait (1942), while the Piano Sonata (1943) and the Third Symphony (1946) continue the development of his concert music. Among his famous film scores are those for Of Mice and Men (1939), Our Town (1940), The Red Pony (1948), and The Heiress (1949).

Copland's concern for establishing a tradition of music in American life increased when he became a teacher at The New School for Social Research at Harvard University, and as head of the composition department at the Berkshire Music Center in Tanglewood, Massachusetts, a school founded by Koussevitzky. His Norton Lectures at Harvard (1951–52) were published as Music and Imagination (1952). Earlier books are What to Listen for in Music (1939) and Our New Music (1941).

Beginning with the Quartet for Piano and Strings (1950), Copland made use of the methods developed by Austrian American composer Arnold Schoenberg, who developed a tonal system not based on any key. This confused many listeners. Copland's most important works of these years include the Piano Fantasy (1957), Nonet for Strings (1960), Connotations (1962), and Inscape (1967). The Tender Land (1954) represents an extension of the style of ballet to the opera stage.

Copland spent the final years of his life living primarily in the New York City area. He engaged in many cultural missions, especially to South America. Although he had been out of the major spotlight for almost twenty years, he remained semiactive in the music world up until his death, conducting his last symphony in 1983.

Aaron Copland died in New York City on December 2, 1990. He was remembered as a man who encouraged young composers to find their own voice, no matter the style, just as he had done for sixty years.

Thank you for this helpful information... It really helped write a program notes for my concert...