The Chinese teacher and philosopher Confucius was the founder of the school of philosophy known as the Ju or Confucianism, which is still very influential in China.

Information on his life

Confucius is the Latinized name of K'ung Fu-tzu (Great Master K'ung). His original name was K'ung Ch'iu; he is also known as K'ung Chung-ni. The most detailed traditional account of Confucius's life is contained in the Records of the Historian (Shih chi) by Ssu-ma Ch'ien, who lived from 145 B.C.E. to 86 B.C.E. Many modern scholars have dismissed this biography as only legend. Nevertheless, from this manuscript one can reconstruct a satisfactory outline of the philosopher's life and influence.

According to the Records of the Historian, Confucius was a descendant of a branch of the royal house of Shang, the dynasty (a family of rulers) that ruled China prior to the Chou, and a dynasty which ruled China from around 1122 B.C.E. to 221 B.C.E. His family, the K'ung, moved to the small state of Lu, located in the modern province of Shantung in northeastern China.

It was believed that Confucius's father divorced his first wife at an advanced age, because she had borne him only daughters 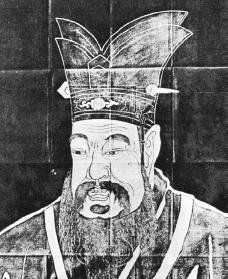 Confucius.
and one disfigured son. He then married a fifteen-year-old girl from the Yen clan, who gave birth to Confucius. Ssu-ma Ch'ien refers to the relationship as a "wild union," which very possibly indicates that Confucius was an illegitimate child, or a child born out of wedlock.

In the Analects, Confucius's book of teachings, he writes that during his youth he was poor and was forced to acquire many different skills. It is clear that even though the fortunes of his family had declined, he was no commoner. Confucius unquestionably belonged to the aristocratic (ruling) class known as the shih. In the time of Confucius most shih served as court officials, scholars, and teachers. Confucius's first occupation appears to have been as keeper of the Lu granary. Later he worked as supervisor of the fields. Both were low positions but consistent with his shih status.

Career as a teacher

It is not known exactly when Confucius began his teaching career, but it does not appear to have been much before the age of thirty. In 518 B.C.E. he is said to have met the famous teacher Lao Tzu (sixth century B.C.E. ), who reportedly bluntly criticized Confucius for his stuffiness and arrogance.

Confucius eventually returned to Lu around 515 B.C.E. For several years after his return he does not appear to have accepted a governmental position. Instead it appears he spent most of his time studying and teaching, gathering a large number of students around him. Although one can only guess about the school's exact course work, it undoubtedly included instruction in ritual, music, history, and poetry.

Around 498 B.C.E. , Confucius decided to leave his home in Lu and embark on a long journey throughout eastern China. He was accompanied by several of his disciples (followers). They wandered throughout the eastern states of Wei, Sung, and Ch'en and at various times had their lives threatened. Confucius was almost assassinated (killed) in Sung. On another occasion he was mistaken for the adventurer Yang Hu and was arrested and held until his true identity became known.

Confucius was received with great respect by the rulers of the states he visited, and he even seems to have received occasional payments. He spent much of his time developing his ideas on the art of government, as well as continuing his teaching. He acquired a large following, and the solidification of the Confucian school probably occurred during these years. Not all of his disciples followed him on his travels. Several of them actually returned to Lu and assumed positions with the Chi clan. It may have been through their influence that in 484 B.C.E. Confucius was invited back to Lu.

Confucius was warmly received in Lu, but there is no indication that he was given a responsible position. Little is known about his last years, although this would have been a logical time for him to work on the many texts and documents he supposedly gathered on his journey. Much of his time was devoted to teaching, and he seems to have remained more or less distant from political affairs.

This was an unhappy period for Confucius. His only son died about this time; his favorite disciple, Yen Hui, died the very year of his return to Lu; and in 480 B.C.E. another disciple, Tzu-lu, was killed in battle. Confucius felt all of these losses deeply, and his sadness and frustration must have been intensified by the realization that his political ideas had found no support among the rulers of his own state. Confucius died in 479 B.C.E. His disciples conducted his funeral and observed a mourning period for him.

Although we cannot be certain that Confucius wrote any of the works he is credited with, it is still possible to know something about the general nature of his philosophy. Shortly after his death his disciples compiled a work known as the Lun yü, commonly translated as the Analects but more accurately rendered as the Edited Conversations . This work consists of conversations between Confucius, his students, and an occasional ruler.

The primary emphasis of the Lun yü is on political philosophy. Confucius taught that the primary task of the ruler was to achieve the welfare (well-being) and happiness of the people of his state. To accomplish this aim, the ruler first had to set a moral (good character) example by his own conduct. This example would in turn influence the people's behavior.

Confucius is the first Chinese thinker to introduce concepts that became fundamental not only to Confucian philosophy but to Chinese philosophy in general. The most important of these are jen (benevolence), yi (propriety, or being proper), and li (ritual, or ceremony). Confucius believed that the chün-tzu, or "gentleman," must set the moral example for others in society to follow. In the Lun yü jen, what has been translated as humaneness or benevolence (being kind) is a quality a chün-tzu should develop and attempt to encourage in others. Li is considered the rules and ritual that are observed in religious and nonreligious ceremonies and, as applied to the chün-tzu, composed rules of behavior. Yi represents what is right and proper in a given situation. The chün-tzu, by observing the ritual and because of his good nature, always knows what is right.

Confucius was basically a humanist and one of the greatest teachers in Chinese history. His influence on his immediate disciples was deep. His students continued to explain his theories until, in the first Han dynasty (206 B.C.E. –8 C. E.), the theories became the basis of the state ideology, the body of ideas reflecting the social needs of a culture.

this biography is so good...it is the same of what we watch in our school,we study about confucious and i learn many things from his teaching
2
Jacob

please list your publishers, authors, and date published so you can be a valid source to reference. It just looks bad when I do my "work cited" page, and can not list the exact author, publisher, or date published.