The Irish revolutionary leader Michael Collins was a founder of the Irish Free State. Much of his work helped to secure independence from Great Britain for most of Ireland.

Michael Collins was born near Clonakilty, County Cork, Ireland, on October 16, 1890, to a successful farmer, Michael John Collins, and Mary Anne O'Brien. When the couple married, she was twenty-three years old and he was sixty. The couple would have eight children, with Michael being the youngest.

Raised in a beautiful but remote part of southwest Ireland, Collins was educated at local primary schools. At the Lisavair National School, Collins was inspired by his teacher, Denis Lyons, a member of a secret organization, the Irish Republican Brotherhood (IRB), whose aim was to gain Ireland's independence from Great Britain. Collins was also influenced by the stories of local men who had taken part in the 1798 Rebellion, a conflict that sparked a feud between the Irish Protestants and Catholics. From these stories Collins learned of Irish pride, rebellion, executions, and the general harsh treatment imposed on his country by the British.

In 1906 Collins went to London, England, to enter the civil service as a postal clerk. For ten years Collins lived in London, where he became active in various Irish organizations, including the Gaelic League, a society that promoted the use of the Irish language. Also during this time, Collins was influenced by the writings of Arthur Griffith (1872–1922), an Irish nationalist (a person devoted to the interest of a country) who founded the Irish political party Sinn Fein (We Ourselves). In 1909 Collins himself became a member of the IRB, and would later become the IRB treasurer for the South of England.

By this time Collins had grown into a leader. Well-built at about six feet in height, Collins was a good athlete who possessed great endurance. He was good looking, very friendly, and generally had a strong character, something that would win him both friends and enemies.

Collins returned to Ireland in 1916 to take part in the Easter Rising, a rebellion against British rule. After the rebellion was crushed, Collins was interned (held captive) in North Wales along with most of the other rebels from the IRB. When the internees were released in December 1916, he went to Dublin, where his sharp intelligence and dynamic energy soon secured him a leadership position in the reviving revolutionary movement.

After their victory in the general election of December 1918, the revolutionaries established an Irish Parliament (body of government), Dail Eireann, in January 1919. The Dail officially announced an Irish Republic 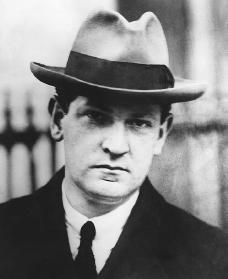 Michael Collins.
Reproduced by permission of
Getty Images
.
(government elected and run by the people of Ireland) and set up an executive to take over the government of the country. British attempts to crush the Republican movement were met with guerrilla warfare (using small bands of soldiers) from the Irish Republican Army (IRA).

Collins played the most important role in this struggle. As director of intelligence (information) of the IRA, he crippled the British intelligence system in Ireland and replaced it with an effective Irish network. At the same time he performed other important military functions, headed the IRB, and, as minister of finance (executive in charge of money) in the Republican government, successfully raised and handed out large sums of money on behalf of the rebel cause. Despite constant efforts, the British were unable to capture Collins or stop his work. The "Big Fellow" became an idolized and near-legendary figure in Ireland, and he won a reputation in Britain and abroad for ruthlessness, resourcefulness, and daring.

After the truce of July 1921, Collins reluctantly agreed to Irish president Eamon de Valera's (1882–1975) request to serve on the peace-making talks headed by Arthur Griffith. During the autumn negotiations in London, the British government firmly rejected any settlement that involved recognition of the republic. Instead its representatives offered Dominion status for Ireland (self-governing, but still part of the British Commonwealth) with the right of exclusion (to be left out) for loyalist Northern Ireland. Collins decided to accept these terms, in the belief that rejection meant renewal of the war and quick defeat for Ireland, and that the proposed treaty would soon lead to unity and complete freedom for his country. Using these arguments, he and Griffith persuaded their side to sign the treaty on December 6, 1921, and Dail Eireann to approve it on January 7, 1922.

De Valera and many Republicans refused to accept the agreement, however, believing that it meant a betrayal of the republic and would mean continued domination by Britain. As the British evacuated southern Ireland, Collins and Griffith did their best to maintain order and enforce the treaty signed with the British. They found their efforts frustrated by the opposition of an armed Republican minority, however. Collins sought desperately to satisfy the forces that opposed the treaty without abandoning the treaty altogether, but he found it impossible to make a workable compromise.

In late June 1922, after the population had supported the settlement in an election, Collins agreed to use force against the opposition. This action sparked a civil war, a bitter conflict in which the forces of the infant Irish Free State eventually overcame the extreme Republicans in May 1923. Collins did not live to see the end of the war, though. He was killed in an ambush in West Cork on August 22, 1922, just ten days after the death of Arthur Griffith.

Much of Collins's success as a revolutionary leader was due mainly to his realism (being practical) and extraordinary efficiency. He also possessed an amazing vision and humanity in his character, however, which appealed to friend and foe alike. The treaty that cost him his life did not end the argument, as he had hoped, but it did make possible the peaceful gaining of full political freedom for most of Ireland.