The English church official Lewis Carroll was the author of Alice in Wonderland and Through the Looking Glass, famous adventure stories for children that adults also enjoy. He was also a noted mathematician and photographer.

Lewis Carroll was born Charles Lutwidge Dodgson on January 27, 1832, the eldest son and third of eleven children born to Frances Jane Lutwidge and the Reverend Charles Dodgson. Carroll had a happy childhood. His mother was patient and gentle, and his father, despite his religious duties, tutored all of his children and raised them to be good people. Carroll frequently made up games and wrote stories and poems, some of which were similar to his later published works, for his seven sisters and three brothers.

Although his years at Rugby School (1846–49) were unhappy, he was recognized as a good student, and in 1850 he was admitted to further study at Christ Church, Oxford, England. He graduated in 1854, and in 1855 he became mathematical lecturer (more like a tutor) at the college. This permanent appointment, which not only recognized his academic skills but also paid him a decent sum, required Carroll to take holy orders in the Anglican Church and to remain unmarried. He agreed to these requirements and was made a deacon in 1861.

Among adults Carroll was reserved, but he did not avoid their company as some reports have stated. He attended the theater frequently and was absorbed by photography and writing. After taking up photography in 1856, he soon found that his favorite subjects were children and famous people, including English poet Alfred Lord Tennyson (1809–1892), Italian painter and poet D. G. Rossetti (1828–1882), and English painter John Millais (1829–1896). Helmut Gernsheim wrote of Carroll's photographs of children, "He achieves an excellence which in its way can find no peer." Though photography was mostly a hobby, Carroll spent a great deal of time on it until 1880.

In the mid-1850s Carroll also began writing both humorous and mathematical works. In 1856 he created the pseudonym (assumed writing name) "Lewis Carroll" by translating his first and middle names into Latin, reversing their order, then translating them back into English. His mathematical writing, however, appeared under his real name.

In 1856 Carroll met Alice Liddell, the four-year-old daughter of the head of Christ Church. During the next few years Carroll often made up stories for Alice and her sisters. In July 1862, while on a picnic with the Liddell girls, Carroll recounted the adventures of a little girl who fell into a rabbit hole. Alice asked him to write the story out for her. He did so, calling it Alice's Adventures under Ground. After some changes, this work was published in 1865 as Alice's Adventures in Wonderland with illustrations by John Tenniel.

Encouraged by the book's success, Carroll wrote a second volume, Through the Looking Glass and What Alice Found There (1872). Based on the chess games Carroll played with the Liddell children, it included material he had written before he knew them. The first section of "Jabberwocky," for example, was written in 1855. More of Carroll's famous Wonderland characters—such as Humpty Dumpty, the White Knight, and Tweedledum and Tweedledee—appear in this work than in Alice in Wonderland.

Unlike most of the children's books of the day, Alice and Through the Looking Glass did not attempt to convey obvious moral lessons. Nor did they contain what critics have tried to insist are there—hidden meanings relating to religion or politics. They are delightful adventure stories in which a normal, healthy, clearheaded little girl reacts to the "reality" of the adult world. Their appeal to adults as well as to children lies in Alice's intelligent response to ridiculous language and action.

Carroll published several other nonsense works, including The Hunting of the Snark (1876), Sylvie and Bruno (1889), and Sylvie and Bruno Concluded (1893). He also wrote a number of pamphlets poking fun at university affairs, which appeared under a fake name or without any name at all, and he composed several works on mathematics under his true name. In 1881 Carroll gave up his lecturing to devote all of his time to writing. From 1882 to 1892, however, he was 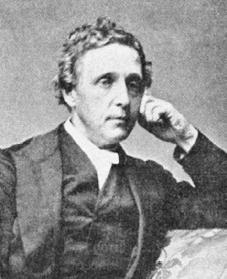 Lewis Carroll.
Courtesy of the
Library of Congress
.
curator of the common room (manager of the staff club) at Christ Church. After a short illness, he died on January 14, 1898.

Assessment of the man

The Reverend C. L. Dodgson was a reserved, fussy bachelor who refused to get wrapped up in the political and religious storms that troubled England during his lifetime. Lewis Carroll, however, was a delightful, lovable companion to the children for whom he created his nonsense stories and poems. Biographers and historians have long been confused that one man could have two completely different sides.

One solution is that he had two personalities: "Lewis Carroll" and "the Reverend Mr. Dodgson," with the problems that go along with having a split personality. There were peculiar things about him—he stammered ever since he was a child, he was extremely fussy about his possessions, and he walked as much as twenty miles a day. But another solution seems more nearly correct: "Dodgson" and "Carroll" were parts of one personality. This personality, because of happiness in childhood and unhappiness in the years thereafter, could blossom only in a world that resembled the happy one he knew while growing up.