The Scottish-born American industrialist and philanthropist Andrew Carnegie was the leader of the American steel industry from 1873 to 1901. He donated large sums of his fortune to educational, cultural, and scientific institutions.

Andrew Carnegie was born on November 25, 1835, in Dunfermline, Scotland, the son of William Carnegie, a weaver, and Margaret Morrison Carnegie. The invention of weaving machines replaced the work Carnegie's father did, and eventually the family was forced into poverty. In 1848 the family left Scotland and settled in Allegheny City, Pennsylvania. Carnegie's father found a job in a cotton factory, but he soon quit to return to his home handloom, making linens and trying to sell them door to door. Carnegie also worked in the cotton factory, but after his father died in 1855, his strong desire to help take care of the family pushed him to educate himself. He became an avid reader, a theatergoer, and a lover of music.

Carnegie became a messenger boy for the Pittsburgh telegraph office. He later became a telegraph operator. Thomas A. Scott, superintendent of the western division of the Pennsylvania Railroad, made the eighteen-year-old Carnegie his secretary. Carnegie was soon earning enough salary to buy a house for his mother. During the Civil War (1861–65), when Scott was named assistant secretary of war in charge of transportation, Carnegie helped organize the military telegraph system. But he soon returned to Pittsburgh to take Scott's old job with the railroad.

A future in steel

Between 1865 and 1870 Carnegie made money through investments in several small iron mills and factories. He also traveled throughout England, selling the bonds of small United States railroads and bridge companies. Carnegie began to see that steel was eventually going to replace iron for the manufacture of rails, structural shapes, pipe, and wire. In 1873 he organized a steel rail company. The first steel furnace at Braddock, Pennsylvania, began to roll rails in 1874. Carnegie continued building by cutting prices, driving out competitors, shaking off weak partners, and putting earnings back into the company. He never went public (sold shares of his company in order to raise money). Instead he obtained capital (money) from profits—and, when necessary, from local banks—and he kept on growing, making heavy steel alone. By 1878 the company was valued at $1.25 million.

In the 1880s Carnegie's purchases included a majority stake in the H. C. Frick 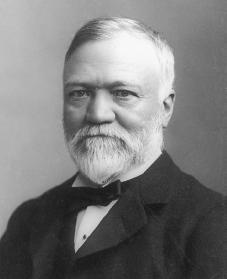 Andrew Carnegie.
Courtesy of the
Library of Congress
.
Company, which had vast coal lands and over one thousand ovens in Connellsville, Pennsylvania, and the Homestead mills outside of Pittsburgh, Pennsylvania. Frick became his partner and eventually chairman of the Carnegie Company. Carnegie had moved to New York City in 1867 to be close to the marketing centers for steel products; Frick stayed in Pittsburgh as the general manager. They made a good team. Behind the scenes, Carnegie planned new projects, cost controls, and the improvement of plants; Frick was the working director who watched over the mass-production programs that helped keep prices down.

Carnegie spent his leisure time traveling. He also wrote several books, including Triumphant Democracy (1886), which pointed out the advantages of American life over the unequal societies of Britain and other European countries. To Carnegie access to education was the key to America's political stability and industrial accomplishments. In 1889 he published an article, "Wealth," stating his belief that rich men had a duty to use their money to improve the welfare of the community. Carnegie remained a bachelor until his mother died in 1886. A year later he married Louise Whitfield. They had one child together. The couple began to spend six months each year in Scotland, though Carnegie kept an eye on business developments and problems.

Carnegie's absence from the United States was a factor in the Homestead mill strike of 1892. After acquiring Homestead, Carnegie had invested in new plants and equipment, increased production, and automated many of the mill's operations, cutting down the number of workers that were needed. These workers belonged to a union, the Amalgamated Association of Iron and Steel Workers, with which the Carnegie Company had established wage and work agreements on a three-year basis. Carnegie believed that workers had a right to bargain with management through their unions. He also recognized the right to strike, as long as the action was conducted peacefully. He viewed strikes as trials of strength, with peaceful discussion resolving the conflict.

In contract talks during 1892, Frick wanted to lower the minimum wage because of the need for fewer workers. The union would not accept this and organized a strike. Carnegie was in Scotland, but he had instructed Frick that if a strike occurred the plant was to be shut down. Frick decided to smash the union by hiring people from the Pinkerton Agency as replacement workers and by trying to open the company properties by force. Two barges carrying three hundred Pinkertons moved up the Monongahela River and were shot at from the shore. The Pinkertons fired back, but they eventually surrendered. Five strikers and three Pinkertons were killed, and there were many injuries. The strikers had won; the company property remained closed. Five days later the governor of Pennsylvania sent in soldiers to restore order and open the plant. The soldiers were eventually withdrawn, and two months later the union called off the strike. Carnegie was criticized for his lack of action.

In the 1890s Carnegie also began to meet with tougher competition from newer, bigger companies who were interested in controlled prices and sharing the market. Companies that he had sold to for years threatened to cut down their purchases unless he agreed to cooperate. These threats made him decide to fight back. He refused to enter into any agreements with other companies. Moreover, he decided to invade their territories by making similar products and by expanding his sales activities into the West. Eventually, though, he decided to sell his company to the newly formed U.S. Steel Corporation in 1901 for almost $500 million. Carnegie's personal share was $225 million.

In retirement, Carnegie began to set up trust funds "for the improvement of mankind." He built some three thousand public libraries all over the English-speaking world. In 1895 the Carnegie Institute of Pittsburgh was opened, housing an art gallery, a natural history museum, and a music hall. He also built a group of technical schools that make up the present-day Carnegie Mellon University. The Carnegie Institution of Washington was set up to encourage research in the natural and physical sciences. Carnegie Hall was built in New York City. The Foundation for the Advancement of Teaching was created to provide pensions for university professors. Carnegie also established the Endowment for International Peace to seek an end to war.

In all, Carnegie's donations totaled $350 million. The continuation of his broad interests was put under the general charge of the Carnegie Corporation, with a donation of $125 million. Carnegie died on August 11, 1919, at his summer home near Lenox, Massachusetts.