Johnny Carson has been called the "King of Late Night Television." He became a pioneer in television as host of The Tonight Show for thirty years. His interviewing and comic techniques won over a huge audience and produced numerous imitators.

Johnny Carson was born on October 23, 1925, in Corning, Iowa. At the age of eight, Carson's father moved the family to Norfolk, Nebraska. It was there that Carson grew up and began developing his talent for entertaining. At twelve Carson found a book of magic and became fascinated by it. He ordered a magic kit and began practicing. He wanted to be a magician. Carson's first paid performance was at the Norfolk Rotary Club when he was fourteen years old. He had a magician's stand with the name "The Great Carsoni" on a black velvet cloth draped over the front. Carson also performed for his mother's bridge club and the Methodist Church socials.

Carson was in his senior year of high school when Japan bombed Pearl Harbor on December 7, 1941. After graduation he enlisted with the United States Navy. He was never in combat, but during this time he would help entertain the troops by giving shows using his ventriloquist dummy, Eddie. After the navy Carson returned to Norfolk and attended the University of Nebraska. He graduated in 1949 with a major in speech and a minor in radio. His final thesis (an academic paper) was on "How to Write Comedy Jokes."

Carson joined the radio station WOWAM in Omaha, Nebraska, directly out of college. He was given his own show, which debuted on August 1, 1949. The Johnny Carson Show went on the air for forty-five minutes in the morning. He became known for using cheerful banter (good-humored teasing) while reading the news. His show was a success.

Carson decided to see if he could make it in Hollywood, California. He could not find a job for months. Finally, Carson was offered a job at KNXT to read the station call letters, the time, and the weather. The job did not give the fame or status he experienced in Omaha, but it was Hollywood and that was where he wanted to be. After a year Carson was given his own television show called Carson's Cellar. Many skits and characters that were later seen by millions on the Tonight Show made their television debut on Carson's Cellar. Carson worked very hard at his job. He put in extra hours, working both in and out of the studio on his show. After Carson's Cellar went off the air, he became a game show host for Earn Your Vacation and a comedy writer for Red Skelton (1913–1997). His hard work paid off. He was once asked to fill in for Skelton when the comedian was injured in rehearsals. Carson impressed the television network management.

Carson signed a contract with the Columbia Broadcasting System (CBS) shortly after. A year later Johnny Carson had his own half-hour comedy show called The Johnny Carson Show. However, because of problems the network was having with writers and directors, the program was canceled after four months. CBS failed to renew his contract. Carson was left unemployed with a wife and three sons to support. He accepted a job as game show host for Do You Trust Your Wife?, which later became Who Do You Trust?, on the American Broadcasting Companies 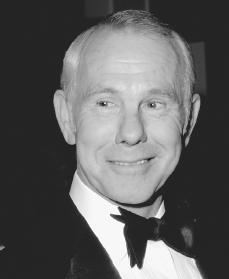 Johnny Carson.
Reproduced by permission of
Archive Photos, Inc.
(ABC) network. He had to move to New York City for the job. New York was not as easy as Hollywood, but Carson kept working hard. He was asked to substitute for Jack Paar, who was the host of a program called The Tonight Show, for two weeks in 1958. He performed a comedy routine for The Perry Como Show about the same time. Slowly, Carson was making a name for himself again.

Steve Allen (1921–2000) started The Tonight Show on the radio in 1951 in Los Angeles, California. The show moved to television in 1954 in New York. Allen hosted the show for two-and-a-half years, and was eventually replaced by Jack Paar. Several million viewers watched every night from 11:15 P.M. to 1:00 A.M. Johnny Carson took over on October 1, 1962. The rest is television history.

Over thirty years Carson developed perfect stage presence. His opening comic monologue (an act read by one person) and golf swing, his attention to comic details like timing, delivery, and gestures, plus his fair treatment of guests, made him a natural host of the most popular television show of the time. Carson believed that if the guest sparkled, so would the show. Over the years many of the country's greatest entertainers, celebrities, and everyday people sat and talked with Carson. He was a major influence in helping new performers. Comedians David Letterman (1947–), Jay Leno (1950–), George Carlin, and Joan Rivers all got their big break from appearing on The Tonight Show. Jay Leno eventually replaced Carson as the show's host.

Carson's personality in his private life is very different from the personality he played on the television set. On The Tonight Show Carson always seemed very relaxed and seemed to enjoy making casual chat with his guests. Outside the studio, Carson preferred to remain distant. He was almost shy and small talk did not impress him. Carson preferred to save himself for his audience. He has been divorced three times and often worked those experiences into his monologues.

After The Tonight Show

After hosting The Tonight Show 4,531 times for millions of people over thirty years, Carson decided to retire from the show. On Friday, May 22, 1992, Johnny Carson did his famous golf swing for the last time.

Carson lives in Malibu, California, with his wife, Alex Mass. He manages to play tennis and sail his boat when he is not working at his company, Carson Production Group. He reportedly entertains thoughts of releasing The Tonight Show reruns for sale directly to local cable television channels. Carson had surgery to treat coronary (heart) artery disease in 1999. In 2002 he donated seventy-five thousand dollars to build a skateboard park in his hometown of Corning, Iowa. Many people think that every host of late-night television has a show today because of what Johnny Carson accomplished.