The French novelist, essayist, and playwright Albert Camus was the literary spokesman for his generation. His obsession with the philosophical problems of the meaning of life and man's search for value made him well loved by readers, resulting in his award of the Nobel Prize in Literature at the age of forty-four.

Albert Camus was born on November 7, 1913, in Mondovi, Algeria, then part of France. His French father was killed in World War I (1914–18; a war that involved many European countries, such as Russia, the United States, and areas of the Middle East) when Albert was just one year old. His mother, of Spanish origin, was able to provide a small income and home in a needy neighborhood of Algiers, Algeria, through unskilled labor. His childhood was one of poverty and of sunshine. Life in Algeria left Camus feeling rich because of the temperate climate. Camus said, "I lived in destitution but also in a kind of sensual delight." His Spanish heritage provided him with a self-respect in poverty and a passion for honor. Camus started writing at an early age.

His schooling was completed only with help from scholarships. At the University of Algiers, he was a brilliant student of philosophy (the study of value and meaning in life), focusing on the comparison of Hellenism (ideals associated with Ancient Greece) and Christianity. Camus is described as both a physical and mental athlete. While still a student, he founded a theater and both directed and acted in plays. At seventeen he contracted tuberculosis (a disease that mainly affects the lungs), which kept him from further sports, the military, and teaching jobs. Camus worked at various jobs before becoming a journalist in 1938. His first published works were L'Envers et l'endroit (1937; The Wrong Side and the Right Side) and Noces (1938; Festivities), books of essays dealing with the meaning of life and its joys, as well as its underlying meaninglessness. 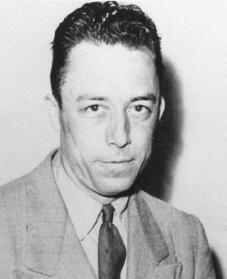 Albert Camus.
Reproduced by permission of
Archive Photos, Inc.
novel. He is less interested in psychological (involving the study of the mind) analysis than in philosophical problems in his books. Camus developed an idea of the "absurd," which provides the theme for much of his earlier work: the "absurd" is the gulf between man's desire for a world of happiness, a world which he can understand rationally, and the actual world, which is confused and irrational. The second stage in Camus's thought developed from the first—man should not simply accept the "absurd" universe, but should "revolt" against it. This revolt is not political but in the name of traditional values.

His first novel, L'Étranger (The Stranger), published in 1942, focuses on the negative aspect of man. The theme of the novel is embodied in the "stranger" of its title, a young clerk called Meursault, who is narrator as well as hero. Meursault is a stranger to all expected human emotions. He is a human sleepwalking through life. The crisis of the novel takes place on a beach, when Meursault, involved in a quarrel not of his causing, shoots an Arab. The second part of the novel deals with his trial for murder and his sentence to death, which he understands about as much as why he killed the Arab. Meursault is absolutely honest in describing his feelings, and it is this honesty that makes him a "stranger" in the world and ensures the verdict of guilty. The total situation symbolizes the absurd nature of life, and this effect is increased by the deliberately flat and colorless style of the book.

Unable to find work in France during World War II (1939–45; a war in which Great Britain, France, the Soviet Union, and the United States fought against Germany, Italy, and Japan), because Germany invaded and occupied France, Camus returned to Algeria in 1941 and finished his next book, Le Mythe de Sisyphe (The Myth of Sisyphus), also published in 1942. This is a philosophical essay on the nature of the meaninglessness of life, which is shown in the mythical figure of Sisyphus, who is sentenced for eternity to roll a heavy rock up a mountain only to have it roll back down again. Sisyphus becomes a symbol of mankind and, in his constant efforts, achieves a certain sad victory.

In 1942 Camus, back in France, joined a Resistance group and engaged in underground journalism until the Liberation in 1944, when he became editor of the former Resistance newspaper Combat for three years. Also during this period his first two plays were staged: Le Malentendu (Cross-Purpose) in 1944 and Caligula in 1945. Here again the principal theme is the meaninglessness of life and the finality of death. It was in playwriting that Camus felt most successful.

In 1947 Camus published his second novel, La Peste (The Plague). Here, Camus focuses on the positive side of man. In describing a fictional attack of bubonic plague (a highly contagious outbreak of disease that causes many deaths) in the Algerian city of Oran, he again treats the theme of the absurd, represented by the meaningless and totally unearned suffering and death caused by the plague. But now the theme of revolt is strongly developed. Man cannot accept this suffering without a fight. The narrator, Dr. Rieux, explains his ideal of "honesty"—preserving his strength of character by struggling as best he can, even if unsuccessfully, against the outbreak of disease. On one level the novel can be taken as a fictional representation of the German occupation of France. It also has a wider appeal, though, as a symbol of the fight against evil and suffering, the major moral problem of human experience.

Camus's next important book was L'Homme révolté (1951; The Rebel). Another long essay, this work treats the theme of revolt in political, as well as philosophical, terms. Camus, who had been a member of the Communist Party (a political party whose members support the idea that the government should control the production and distribution of goods) for one year, afterward maintained a position of political independence from the parties in France. In this book he develops the idea that man should not tolerate the irrationality of the world, while at the same time making a careful distinction between revolt and revolution. Revolution, despite its initial ideals, he sees as something that always ends in a cruelty as great or greater than the one it set out to destroy. Instead Camus asks for revolt: a more individual protest, in tune with the values of tolerance and moderation. Above all he strongly rejects the Marxist belief that "history" will inevitably produce a world revolution and that any action committed in its name will therefore be justified. For Camus, the end can never justify the means.

In 1957 Camus received the great honor of the Nobel Prize in Literature for his works. In the same year he began to work on a fourth important novel and was also about to become the director of a major Paris theater, when, on January 4, 1960, he was killed in a car crash near Paris. He was forty-six years old. This was a tragic loss to literature, since he had yet to write the works of his full maturity as an artist and a thinker.

I was wondering if I could have the publication info for this information. Date it was published, last update date, author, or the source of the information if possible. Thank you for putting this here I apreciate it.