As a result of his election on November 3, 1992, Ben Nighthorse Campbell of Colorado became the first Native American to serve in the U.S. Senate in more than sixty years. A member of the Northern Cheyenne tribe, Campbell was also a world-famous athlete and was captain of the U.S. judo team for the 1964 Olympics in Tokyo, Japan.

Ben Campbell (he added "Nighthorse" as an adult) was born in Auburn, California, on April 13, 1933, to Mary Vierra, a Portuguese immigrant, and Albert Campbell, a member of the Northern Cheyenne tribe. He had a hard childhood with a mother frequently hospitalized for tuberculosis, an infectious disease that affects the lungs. Campbell's father was an alcoholic who failed to support the family, and his mother was often too sick to take care of and support the children. At such times she placed Campbell and his younger sister, Alberta, in the care of an orphanage. Indeed, by the time he turned ten years old Nighthorse had spent half of his life in St. Patrick's Catholic Orphanage in Sacramento, California.

With little supervision at home, the youngster spent much of his time in the streets getting into trouble. He was frequently absent from high school, earning mostly poor grades. While still a teenager he was involved in such activities as stealing guns and cars, shoplifting, and driving drunk. At age fifteen he was arrested for stealing gasoline. A year later he was arrested and briefly jailed for driving drunk and crashing into a gas station. The police released him back into the custody of his parents.

Life began to change as Campbell learned a new skill. While working as a fruit picker in California's Sacramento Valley, he became friends with some Japanese youths who taught him judo. That sport, according to the senator, "kept me off the streets and out of jail." After leaving high school, he served in the U.S. Air Force from 1951 to 1953 during the Korean War (1950–53), a war in Korea in which the United States joined South Korea in its fight against Communist North Korea. Campbell was stationed in Korea, where he gained the military rank of Airman, Second Class. He studied to receive his high school equivalency diploma and continued with his judo training. Studying with Korean judo instructors during times when he was not on military duty, Campbell earned a brown belt in the sport.

From judo to jewelry

After finishing his military service, Campbell entered San Jose State University and supported himself by picking fruit and driving a truck. As a senator Campbell remembered this early work experience and 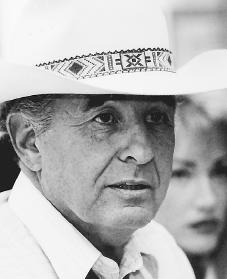 Ben Nighthorse Campbell.
Reproduced by permission of
AP/Wide World Photos
.
was still a member of the Teamsters labor union (which includes truckers) who proudly displayed his union membership card. In 1957 he received a bachelor's degree in physical education and fine arts. Upon graduation he moved to Tokyo for four years to work on his judo and study at Meiji University.

Campbell's ability in judo won him All American status in that sport and helped him become a three-time U.S. judo champion. He won the gold medal in the Pan-American Games in 1963 and served as captain of the U.S. judo team at the Tokyo Olympics the next year. Later he coached the U.S. international judo team.

Although Campbell worked many jobs, ranging from farm laborer to policeman, he found financial success as a designer of Native American jewelry. He had been interested in this Native American art form since his childhood, but in Japan he learned how to laminate different metals, a technique that involves beating, splitting, or layering metals in thin sheets. Although jewelry makers who used more traditional methods said that this technique did not follow the style of Native American art, others recognized Campbell as an important artist creating new artistic forms. He won more than two hundred design awards for his handmade rings, bracelets, and pendants. Some of his work has sold for as much as twenty thousand dollars. By 1977 Campbell's success had allowed him to move to a 120-acre ranch on the Southern Ute Indian Reservation near Ignacio, Colorado. There he trained champion quarter horses until an injury forced him to stop.

Campbell's involvement in politics came about because of bad weather. Unable to fly his single-engine airplane to the West Coast to deliver some jewelry because of heavy storms, he visited a meeting of Colorado Democrats who were seeking a candidate for the state's Fifty-ninth House District. At that meeting Democratic leaders persuaded Campbell to run for that office. To nearly everyone's surprise he defeated his better-known opponent and served in the state legislature for four years. In 1986 voters of Colorado's Third Congressional District elected Campbell as a Democrat to the U.S. House of Representatives after a closely fought election. With this victory Campbell became only the eighth Native American ever elected to Congress. He won reelection to this seat three times.

In Congress Campbell earned a reputation for having a "straightshooting approach." His charm, sincerity, leadership qualities, and mix of political beliefs helped him gain support from a wide variety of groups within and outside of Congress. Although he was a strong conservative in areas of financial management (he supported an amendment to the U.S. Constitution that would require a balanced budget), he was a liberal on social issues. His stand on abortion (the purposeful termination of a pregnancy), for example, is strongly prochoice, or in favor of a woman's right to choose to have an abortion. He played an important role in gaining laws to settle disputes involving Native American water rights. In 1991 he won a fight to change the name of Custer Battlefield Monument in Montana to the Little Bighorn Battlefield National Monument, in honor of the Native Americans who died there in 1876 in battle against the troops of General George Custer (1839–1876). Campbell was also instrumental in establishing the National Museum of the American Indian within the Smithsonian Institution.

After six years in the House of Representatives, Campbell decided to run for the Senate seat vacated by Tim Wirth (1939–), a liberal Democrat who decided not to run for a second term. He defeated Josie Heath and former governor Dick Lamm (1935–) in the Democratic primary. On November 3, 1992, he beat the conservative Republican state senator Terry Considine for the Senate. As a Democratic senator he almost always supported the programs of the Clinton administration (1993–2001).

On March 3, 1995, Campbell made a decision that shocked much of the political world. He decided to move from the Democratic Party to the Republican Party. It has been stated that the balanced-budget amendment persuaded Campbell to change his political views. Campbell served the remainder of his first six-year term as a Republican and was reelected for a second term in 1998, after running as a Republican.