Ralph Bunche was the highest American official in the United Nations. In 1950 he became the first African American to win the Nobel Peace Prize for his work on the negotiations that led to a truce in the First Arab-Israeli War (1948–49).

Ralph Johnson Bunche was born in Detroit, Michigan, on August 7, 1904. (His given last name was Bunch, but as a teenager he added the "e" because he thought it looked better.) Bunche's father was a barber, and his parents were very poor. In time they also became very ill and both died when he was thirteen years old. After his parents' deaths Bunche and his young sister went to live with his maternal grandmother in Los Angeles. While going to school he helped support the family by working as a janitor, a carpet-layer, and a seaman. His grandmother's strong will and her wisdom had a lasting influence on him.

Bunche attended the University of California at Los Angeles on scholarships and graduated in 1927. He earned a master's degree at Harvard University in 1928 and a doctor of philosophy (Ph.D.) degree in government and international relations at Harvard in 1934.

In 1928 Bunche began teaching in the Department of Political Science at Howard University. He was department chairman from 1937 to 1942. In 1930 he married Ruth Harris, one of his students. The couple had three children. In 1950 he was appointed to the faculty of Harvard University, but after two leaves of absence he resigned in 1952, without having taught there. 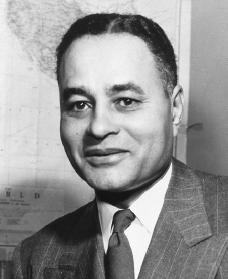 Bunche was an expert on colonialism. The term colonialism refers to a nation's possession or control over a colony. (For example, both the United States and Nigeria were once colonies ruled by Great Britain.) During World War II (1939–45), Bunche worked in the U.S. Office of Strategic Services as an expert on African and Far Eastern affairs. In 1944 he moved to the U.S. State Department. From 1944 to 1946 Bunche was active as an expert on trusteeship in the planning and establishment of the United Nations (UN). (Trusteeship is the overseeing of a colony or territory by a country or countries given the authority to do so by the UN.) In 1947 Bunche was asked to join the UN Secretariat by the UN's Secretary General, Trygve Lie (1896–1968). Bunche served as director of the Trusteeship Division.

At the UN Bunche was given some difficult assignments. In 1947 he was a member of the UN Special Committee on Palestine that recommended Palestine's division into Jewish and Arab states. The Arabs refused to accept the UN plan. This led to the first Arab-Israeli War. When the UN's chief negotiator in that conflict was assassinated in 1948, Bunche took his place. From January to June 1949 he led the difficult negotiations between Arab and Israeli groups on the Greek island of Rhodes. The negotiations eventually led to an agreement to end the fighting. Both sides praised his achievement, and in 1950 he was awarded the Nobel Peace Prize for his work.

From 1955 to 1971 Bunche held important positions at the UN. He directed UN peacekeeping operations in the Suez area of the Middle East (1956), in the Congo (1960), and on the island of Cyprus (1964). He was also responsible for the UN's program involving the peaceful uses of atomic energy. In June 1971 he retired while suffering from a fatal illness.

Bunche was the grandson of a slave. His personal experience of prejudice (making judgments about a person solely based on his or her race) and his concern about race relations led him to become a teacher and an expert in the problems of colonialism. In 1936 he was codirector of the Institute of Race Relations at Swarthmore College. From 1938 to 1940 he assisted the Swedish sociologist Gunnar Myrdal (1898–1987) in his investigation of racial problems in the United States. Their research led to Myrdal's book An American Dilemma.

For twenty-two years Bunche was a member of the board of directors of the National Association for the Advancement of Colored People (NAACP). In 1965 he participated in marches in Selma and Montgomery, Alabama. Led by Martin Luther King Jr. (1929–1968), the marches protested racial discrimination.

Bunche received many honorary degrees and awards. President John F. Kennedy (1917–1963) presented him with the Medal of Freedom in 1963. Bunche died in New York City on December 9, 1971.

Ralph Bunch was born in Detroit, Michigan, on August 7, 1904. He added the E into his last name because he thought it would look better. Ralph Bunch’s Father was a barber and his parents were very poor. After sometime when they were ill and both of their parents died when Ralph Bunch was 13 years old. He earned a master's degree at Harvard University in 1928 and a doctor of philosophy (Ph.D.) degree in government and international relations at Harvard in 1934.In 1928 Bunche began teaching in the Department of Political Science at Howard University