The Buddha was an Indian philosopher (seeker of wisdom), religious teacher, and the historical founder of Buddhism. He is regarded by some as a human spiritual teacher (concerned with religious values) and by others as an all-knowing supreme being.

The Buddha, or "enlightened one" (free from ignorance and misunderstanding), was born Siddhartha Gautama in northern India near the town of Kapilavastu. His father was ruler of a poor Indian tribe, the Shakyas. His mother died seven days after giving birth to him. Some legends say that he was able to walk and talk at birth. It is also written that he first fell into a state of meditation (focusing all of one's thoughts on something) as a boy while sitting under a tree watching his father plow a field. Meditation was to become an important part of his life.

It is said that Gautama's father, in order to prevent him from worrying about the problems of suffering, death, and injustice, built a special palace for him surrounded with distracting luxuries. Gautama eventually married and had a son. But he continued to dwell on the great religious questions, and at the age of twenty-nine he made a bold move. He officially gave up his worldly commitments, left his family, and began a search for the answers to the questions that bothered him.

Gautama is said to have experimented with many different teachings for seven years but found none of them acceptable. He set them all aside, and at last, in a single night of deep meditation, he achieved a major breakthrough, an absolutely clear awareness of the real questions of life and the unique religious means for dealing with them. This enlightenment confirmed the truth of his insight, and at this point he became the Buddha.

It is told that at the moment of the Buddha's enlightenment he was entitled to its immediate rewards—complete salvation (freedom from sin) and spiritual release from the bonds of existence. This would have meant that his doctrine (teachings) would never have been made known to other men. Another problem was how to communicate the teachings properly. After debating these issues, the Buddha decided to bring the message to others out of his love and concern for all men. This legend shows that the formal teaching is just the beginning. Understanding the teaching and putting it into practice varies greatly, depending on the ability of those who hear it, their needs, and their historical and cultural situation. In a sense, the history of Buddhism, in all its different forms, is proof of this fact.

The teaching is basically optimistic (hopeful about the future). It holds that every human being—regardless of his social position or past life—can through his own efforts obtain control of himself, of his ideas and passions, and of his destiny. Its main principles are caring for others, love, and nonin-jury to living creatures, and they place great importance on the obligation of all people to promote friendship and peace. The teachings are universal standards of behavior that have obvious benefits in terms of improving interpersonal relationships and social order. Buddha's political teachings were drawn from those of his own clan. The king had the obligation to care for his people and, especially, to set high moral standards. A man who cannot do this is not worthy to rule. (In the traditions the Buddha is represented as consulting frequently with the leaders of the great states and petty kingdoms, teaching his beliefs and seeking to end all warfare.)

The traditions relate that the Buddha first preached his doctrine (Dharma) in Benares, India's great holy city. He began his missionary work soon after with a handful of followers, offering the teaching to all who would hear and understand. The lives and practices of this little band were at first centered on the spiritual authority of the Buddha himself. As the number of followers grew, the loosely structured community (Sangha) 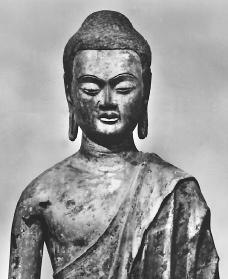 Buddha.
became more organized. It seems probable that by the time of the Buddha's death, at the age of eighty, a number of basic institutional patterns had been set. These included a code of rules to keep order and a collection of the Buddha's sayings. The major ceremonies included the twice-monthly uposatha, a gathering of the monks to recite the rules. Women were admitted to the order. Within the community all barriers of class, race, sex, and previous background were ignored under the impact of the universal message of the teaching.

Despite this appearance of routine organization, the Buddha in one of his last sermons is shown as rejecting all forms of religious authority: "Be lamps unto yourselves, O monks." The main purpose of the rules was to guard the independence of each monk in his own spiritual quest. All those who had become official monks had an equal vote on matters affecting the welfare of the community. When disagreements within the group could not be resolved, those who disagreed simply left and formed a new community. Monks guilty of breaking the code of rules were expected to confess and to punish themselves. The Buddha is occasionally represented as being confused and disgusted by the often selfish behavior of the monks. On at least one occasion he took time to wash and care for a sick monk who had been neglected by the others. His own cousin, Devadatta, is believed to have started a movement to replace the Buddha as head of the order.

Although most of the Buddha's followers devoted their entire lives to the teachings, the power of the Buddha's personality also attracted many lay (nonreligious) followers, known as the "householders." The tradition relates that the Buddha said only that it was harder for the lay followers to attain final salvation, or nirvana, but this did not stop its members from trying. Lay devotees promised to follow the five rules (no killing, stealing, lying, having sex outside of marriage, or consumption of alcoholic beverages) for the sake of "well-being in this world and the next."

The most striking feature of Buddhism is the wide variety of faiths and practices its teachings have inspired. In Tibet the political system was ruled until recently by spiritual leaders, the Dalai and Panchen Lamas, who were regarded as supreme versions of the Buddha. Tibetan Tantrism is a combination of Buddhist and primitive teachings. In China and Japan, Zen Buddhism represents a special meditation-based adaptation that has been strongly influenced by Chinese values. In Sri Lanka Theravada Buddhism has served as an effective state religion, and is often combined with primitive animism (belief in spirits) and magic.

In looking for a single point of unity in all of these different forms of Buddhism, it is to be found only in the Buddha himself, who persists in all the traditions as a model of spiritual perfection and saving power.

Buddha was born in Kapilvastu, NEPAL. Its better to review ur Article once again n provide the actual information about Budhha.
2
JAMES BOND

Buddha was an enlightened one who seek for wisdom and happiness as well as the Truth. Am asking now what was the real source of the wisdom he acquired as he was meditating.
Why was He seeking the Truth? Does it mean that there is a hidden mystery about Truth and Wisdom?
6
Binod Gautam

yes Buddha was born in Lumbini, Which is in Nepal.