F. Lee Bailey is a "superstar" lawyer and best-selling author. Bailey has been involved in a number of well-known cases, such as the trials of Patty Hearst, the Boston Strangler, and O. J. Simpson. Controversy has followed him throughout his career, often due to his willingness and ability to promote himself.

Francis Lee Bailey was born on June 10, 1933, in Waltham, Massachusetts. His mother was a teacher and nursery school director, and his father worked in newspaper advertising. Bailey grew up with two siblings. His parents divorced when he was ten years old. After attending Kimball Union Academy in New Hampshire, he entered Harvard University. An outstanding student, he nonetheless dropped out of Harvard to serve as a fighter pilot in the U.S. Marine Corps. Flying would be a lifelong passion. Bailey then went to law school at Boston University. Shortly after graduating in 1960, he married Florence Gott, but the two divorced in 1961.

The beginnings of stardom

Bailey was first noticed when he defended a doctor, George Elderly, who was charged with murdering his wife. The doctor—whose story served as the basis for the television series and film The Fugitive —was found not guilty. Soon thereafter, another doctor, Samuel H. Sheppard, who was also accused of murdering his wife, was found not guilty because of Bailey's defense. Bailey was on his way to stardom.

This new standout lawyer did not shy away from the spotlight. Indeed, Bailey drew criticism for appearing on television talk shows and discussing various cases. The Supreme Court of New Jersey even disallowed him from practicing in that state for a year. His second wife and former secretary, Froma, stood by while he was written about in magazines much the way a film star might be. He divorced Froma in 1972 and married Lynda Hart that same year.

Again Bailey used his stardom to further his career. He wrote The Defense Never Rests and For the Defense, as well as legal textbooks. Though Bailey lost his defense of Albert DeSalvo, a mental patient who admitted to being the Boston Strangler—a serial killer who had murdered thirteen women—the case did not damage Bailey's reputation.

The same could not be said, however, for the defense Bailey provided for Patty Hearst. The daughter of a publishing giant, 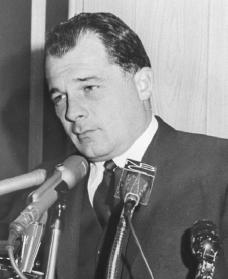 F. Lee Bailey.
Courtesy of the
Library of Congress
.
Hearst claimed to have been kidnapped by a terrorist organization (an organization that achieves its ends by using violence) and forced to participate in a series of bank robberies. Bailey conducted a spirited defense, but Hearst was found guilty. She served twenty-two months in prison and eventually hired another lawyer, hoping for a second trial on the grounds that Bailey had not done his job well. Bailey's loss marked a turning point in the public's judgment of his courtroom abilities.

Bailey divorced Hart in 1980, then waited a full five years before getting married again, this time to flight attendant Patricia Shiers. He continued to publish books, make speeches for $10,000 each, and speak regularly for a cause he cared a lot about: the necessity of reducing lawsuits.

Another strike against Bailey came when he represented the families of the passengers who had been on Korean Airlines flight 007, which was shot down over the Soviet Union in 1983. Though he made several public statements about his commitment to the case, his law firm put in a much smaller number of hours than did the two other law firms working on it.

In the mid-1990s Bailey was asked to join the defense team of O. J. Simpson, the football star turned actor who was accused (and later found not guilty) of murdering his ex-wife Nicole and her friend Ronald Goldman in Los Angeles, California. Bailey's questioning of Los Angeles police detective Mark Fuhrman was one of the most dramatic moments of the trial. Bailey, perhaps not surprisingly, gave himself high marks. "Other lawyers whom I respect told me that given what I had to work with, it was good." However, Edward Felsenthal of the Wall Street Journal said that "Americans who recently named F. Lee Bailey the most admired lawyer in the country might feel differently now that they have actually watched him in action in the O.J. Simpson case."

In 1996 Bailey's reputation was questioned again. He was jailed after failing to hand over illegally obtained shares of stock and money from a former drug-dealer client to a court. Bailey was taken to court again in 1999 for refusing to give up $2 million from a jailed client. In 2001 the state of Florida prohibited Bailey from practicing law there.

In a television appearance Bailey argued that a person "in the business of defending criminal cases is going to live in controversy all of his or her life." Whether or not this is generally true, it certainly has been true for him. At the same time he has been a trailblazer for the superstar lawyers who have followed him.

George "Elderly"...that's not even his name, it's Edgerly was not a doctor, and not the basis of the story The Fugitive. Edgerly was a two-bit gangster who after he was acquitted of murdering his wife, went on to be tried for rape of another woman and then finally convicted of murdering someone else. Dr. Sam Shepherd was the basis of The Fugitive.