American folk singer Joan Baez is recognized for her nonviolent, antiestablishment (against a nation's political and economic structure), and anti-war positions. She has used her singing and speaking talents to criticize violations of human rights in a number of countries.

Joan Baez was born on January 9, 1941, in Staten Island, New York. Her father, Albert V. Baez, was a physicist who came to the United States from Mexico at a very early age, and her mother was of western European descent. Joan inherited her father's dark complexion, and the occasional racial prejudice (hatred of a race) she suffered as a child probably led to her later involvement in the civil rights movement, a movement that called for equal rights for all races. Although as an adult she claimed not to share her parents' strict religious faith, it undoubtedly contributed to what some called her keen "social conscience."

Baez was exposed to an intellectual atmosphere with classical music during her childhood, but rejected piano lessons in favor of the guitar and rock and roll. Her father's research and teaching positions took the family to various American and foreign cities. When Joan was ten, she spent a year in Iraq with her family. There she was exposed to the harsh and intensely poor conditions of the Iraqi people, something that undoubtedly had an affect on her later career as a singer and activist. Baez went on to attend high school in Palo Alto, California, where she excelled in music more than in academic subjects. Shortly after her high school graduation in 1958, her family moved to Boston, Massachusetts, where Baez's interest in folk music surfaced after visiting a coffee shop where amateur folk singers performed.

From Boston coffeehouses to Newport,

Baez briefly attended Boston University, where she made friends with several semi-professional folk singers from whom she learned much about the art. In addition to simple folk songs, she began to sing Anglo American ballads, blues, spirituals, and songs from various countries. As she worked to develop her technique and range of songs, Baez began to perform professionally in Boston coffeehouses and quickly became a favorite of Harvard University students. She was also noticed by other folk singers, including Harry Belafonte (1927–), who offered her a job with his singing group.

In the summer of 1959 Baez was invited to sing at the Newport Folk Festival in Rhode Island. This performance made her a star—especially to young people—and led to friendships with other important folk singers such as the Seeger family and Odetta. Although the performance brought her offers to make recordings and concert tours, she decided to resume her Boston coffee shop appearances.

After Baez's second Newport appearance in 1960, she made her first album for Vanguard Records. Simply labeled Joan Baez, it was an immediate success. She was then such a "hot item" that she could choose her own songs and prop designs for her performances. In the following years Baez sang to capacity crowds on American college campuses and concert halls and on several foreign tours. Her eight gold albums and one gold single demonstrated her popularity as a singer.

Politics a source of controversy

While many critics agreed that Baez's untrained singing voice was unusually haunting, beautiful, and very soothing, they saw her spoken words, lifestyle, and actions as conflicting and sometimes anti-American. In the changing world of the1960s, Baez became a center of controversy (open to dispute) when she used her singing and speaking talents to urge nonpayment of taxes used for war purposes and to urge men to resist the draft during the Vietnam War (1965–73; when the United States aided South Vietnam's fight against North Vietnam). She helped block induction centers (which brought in new recruits) and was twice arrested for such violations of the law.

Baez was married to writer and activist David Harris in March 1968. She was pregnant with their son, Gabriel, in April 1969, and three months later she saw her husband arrested for refusing induction into the military forces. He spent the next twenty months in a federal prison in Texas.

In the early 1970s Baez began to speak with greater harshness. By the end of the decade she had offended dozens of her former peace-activist allies—such as Jane Fonda (1937–) and attorney William Kunstler—with her views on postwar Vietnam. As she had done in the case of Chile and Argentina (without public outcries from former associates), Baez called for human rights to be extended to those centers in the war-torn country.

In later years Baez's singing career faltered despite various attempts to revive it. Her 1985 effort featured a more conventional 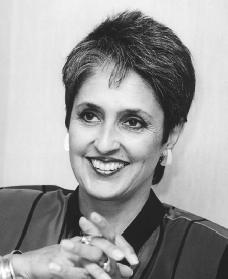 Joan Baez.
Reproduced by permission of
AP/Wide World Photos
.
hairstyle and attire. Her supporters believed she would regain her prominence in the entertainment industry because her voice, although deeper, had the same qualities that made her so successful earlier. Meanwhile, she was quite busy throughout the world as the head of the Humanitas International Human Rights Committee, which concentrated on distracting (in any possible nonviolent way) those whom it believed exercised unauthorized power.

Baez has continued to make music and to influence younger performers. In 1987 Baez released Recently, her first studio solo album in eight years. She was nominated for a 1988 Best Contemporary Folk Recording Grammy Award for "Asimbonanga," a song from the album. Also in 1988 Baez recorded Diamonds and Rust in the Bullring in Bilbao, Spain. The album was released the following April. In 1990 Baez toured with the Indigo Girls and the threesome were recorded for a Public Broadcasting Service (PBS) video presentation, "Joan Baez In Concert." In 1993 two more Baez recordings were released: Play Me Backwards, consisting of new material; and Rare, Live & Classic, a collection of her career from 1958 to 1989, featuring twenty-two previously unreleased tracks. Baez released Gone from Danger in 1997 and Farewell Angelina in 2002.

The singer's interest in politics and human rights has continued as well. In 1993 she was invited by Refugees International to travel to Bosnia-Herzegovina in order to help bring attention to the suffering there. In September of that same year Baez became the first major artist to perform in a professional concert on Alcatraz Island (the former Federal Penitentiary) in San Francisco, California. It was a benefit performance for her sister Mimi Farina's organization, Bread & Roses. She returned to the island for a second benefit in 1996 along with the Indigo Girls and Dar Williams. She has also supported the gay and lesbian cause. In 1995 she joined Janis Ian in a performance at the National Gay and Lesbian Task Force's Fight the Right fundraising event in San Francisco.

In 2001 Farrar, Straus, and Giroux released Positively Fourth Street by David Hajdu. The book is an intimate portrait that explores the relationships between Joan, Mimi Farina, Richard Farina, and fellow folkster Bob Dylan (1941–) during New York City's folk scene of the early 1960s.

Is she still alive?

Where does she live?

And who is her agent?
2
Arelis Velazquez

GOOD LUCK WITH YOUR GUITAR LESSONS...YOU CAN PLAY FOR US AT OUR GROWING FAMILY FESTIVITIES!! LOVE YOU!
3
Ugrit Xuto

I have loved madame Baez's musics at the first time I heard her song, when I was young.At that time, I had not been able to distinguish why I like the song ( because of style or her voice or whatsoever ).
After reading her bibliograph, She is a kind of women with lion heart that a man like me can not be compared.May I ask any goodness in this world blessing for her success (of course for the benefit of the others ), happiness ,and having good health doing what she likes.

Joan Baez was the second most important person in my young life after my father
He was a Communist and Scottish in that order
When I was born in 1952 and grew up in the slum they now call Glasgow
Oh how exciting
Education was the route out (You were both so right and I took it with gusto)
I conformed like so many others . I am sorry. I live well now all over the world
My father will be spinning in his grave
I so miss him so much
I so enjoyed Joan made me feel I could do something when I listened
She is a hero of the 20th century
I and WE all thank you
Bill