On January 23, 1997, when Madeleine Albright was sworn in as the United States secretary of state, she became the first woman to hold this position. Albright's impressive career highlights a combination of scholarly research and political activity.

Madeleine Korbel Albright was born Marie Jana Korbel on May 15, 1937, in Prague, Czechoslovakia (now in the Czech Republic). Her grandmother gave her the nickname "Madeleine" when she was young, and her name was legally changed when she was an adolescent. Her father, Josef Korbel, was a member of the Czechoslovakian diplomatic service (a person who deals with international relations). Her mother, Anna, was a homemaker. Between 1937 and 1948 her family lived in Prague, Czechoslovakia; Belgrade, Yugoslavia; and London, England.

In 1948, while working for the United Nations, Madeleine's father lived in India while the rest of the family lived in New York. When the Communists overthrew the Czechoslovakian government, her father was sentenced to death. Madeleine was eleven years old when her family was given political asylum, or a safe place to live, in the United States. Albright was strongly influenced by her father and credits his influence for her own view of the world.

After becoming a U.S. citizen, Albright pursued an academic career. Her education reflects her interest in politics. She studied political science at Wellesley College and graduated in 1959. Albright then went on to earn advanced degrees in international affairs from the Department of Public Law and Government at Columbia University.

Albright began her political career by working for the unsuccessful presidential campaign in 1976 of Senator Edmund S. Muskie (1914–1996). She then served as Senator Muskie's chief legislative assistant from 1976 to 1978.

In 1978 Albright was asked by one of her former professors at Columbia University, Zbigniew Brzezinski (1928–), National Security Adviser under President Jimmy Carter (1924–), to be a legislative liaison for the National Security Council. She remained in this position until 1981. Albright spent the following year writing Poland, the Role of the Press in Political Change, about the role played by the press during a time of unusual political change in Poland during the 1980s.

Albright's next important career milestone came in 1982, when she joined the faculty of Georgetown University. At George-town 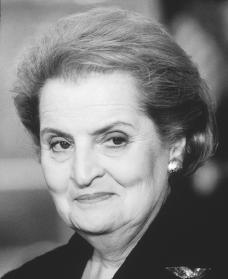 Madeleine Albright.
Reproduced by permission of
Archive Photos, Inc.
she became a research professor of international affairs and the director of women students enrolled at the university's School of Foreign Service.

Albright became advisor to presidential candidate Walter Mondale (1928–) and his running mate, Geraldine Ferraro (1935–), during their 1984 presidential race. She was senior policy advisor to Michael S. Dukakis (1933–) during his 1988 presidential campaign. In 1989, Albright became president of the Center for National Policy, a nonprofit research organization. Over the next few years she was appointed to the boards of several institutions, including Wellesley College, the Black Student Fund, and the Washington Urban League.

Ambassador to the United Nations

When Bill Clinton (1946–) sought the presidential nomination in 1992, Albright supported him. She served as his senior foreign policy advisor during his campaign. In the transition period she served as foreign policy liaison, or the person who is responsible for communicating information about foreign policy, in the White House. Then, Clinton chose Albright to be the U.S. ambassador to the United Nations (UN).

Albright immediately became a major force at the UN. She was familiar with world politics and she represented the United States, the UN's largest contributor to its activities and budget. As a UN ambassador, Albright learned to balance the needs of three different groups: the Clinton administration, the UN delegates, and the American public. She was involved in debates over UN peacekeeping activities and the direction of American foreign policy.

First woman to serve as Secretary of State

In 1996 Clinton nominated Albright for secretary of state and the U.S. Senate unanimously confirmed her nomination. On January 23, 1997, Madeleine Albright was sworn in as secretary of state. She became the highest-ranking female within the United States government.

Shortly after her confirmation, Albright's cousin, Dasha Sima, revealed to reporters at the Washington Post that Albright's family had been Czechoslovakian Jews, not Catholics as she had believed, and that three of her grandparents had died in concentration camps. Before World War II (1939–45) the Nazi government in Germany had set up concentration camps to hold people who they saw as enemies of the state. Eventually minority groups, including Jews, were forced into these camps, where many people died during the course of the war. (Albright was quoted in Newsweek as saying, "I have been proud of the heritage that I have known about and I will be equally proud of the heritage that I have just been given." A few months later, Albright flew to Prague and was honored by Czech Republic president Vaclav Havel (1936–).

Albright began a peace mission in the Middle East in the fall of 1997, first meeting with Israeli Prime Minister Benjamin Netanyahu (1949–), then with Palestinian leader Yasir Arafat (1929–), Syrian President Hafez al-Assad (1930–2000), Egyptian President Hosny Mubarak (1928–), King Fahd ibn Abdul Aziz of Saudi Arabia (1922–), and King Hussein of Jordan (1935–1999). Albright condemned terrorist activities, urged Netanyahu to make some concessions to the Palestinians, and then vowed not to meet with Israeli and Palestinian leaders again until they were "ready to make the hard decisions." In July 2000 Albright returned to the Middle East. This time, talks between the new Israeli Prime Minister Ehud Barak (1942–) and Arafat ended when Barak said he was taking time out from the peace process.

Albright made history with her October 23, 2000, visit to North Korea's leader Kim Jong II (1941–). She became the first U.S. secretary of state to visit North Korea.

After Albright's term as secretary of state ended in January 2001, she became chairman of the board for the National Democratic Institute. Albright is also a well-known public speaker. According to the Washington Speakers Bureau, "Madeleine Albright speaks with humor, insight, and eloquence about her life and career … she provides audiences with a unique, no-holds-barred account of service at the highest levels of the American government."

In spring 2001 Albright became the Michael and Virginia Mortara Distinguished Professor in the Practice of Diplomacy. In a comment about her new teaching position Albright said, "I am very pleased … to have the opportunity to teach, and be inspired by, inquiring students."

She made milions from kosovars why should've give her more???