Anna May Wong is chiefly remembered as the first actress of Asian descent to achieve stardom as the "Oriental temptress," so much a fixture of melodramas in the late 1920s and 1930s.

Born on Flower Street in Los Angeles, California, in 1907, Anna May Wong was named Wong Liu Tsong, which in Cantonese means "frosted yellow willow." Wong was third-generation Chinese American; her father was born in Sacramento, California, and his father had moved to California during the Gold Rush, where thousands flocked to the state in hopes of striking it rich with gold.

Growing up, Wong and her six brothers and sisters lived in an apartment over the family's run-down laundry. Her first memories were of constant steam and the strong odor of hot-ironed linen. As a young child, Wong became fascinated with the brand new world of movies. She began skipping Chinese school in the evenings to watch such movies as The Perils of Pauline (1914) at the local theater. By the time she was eleven, Wong decided she was going to be a movie actress. Against all odds, she got her first part at age fourteen when an agent hired three hundred Chinese girls as extras in the 1919 film The Red Lantern. Hardly visible in the film, she went on to get a few more minor roles.

For two years, Wong worked after school as an extra without telling her parents, who, she knew, would not approve. At age sixteen, her father found her a job as a secretary, but Wong was fired as unqualified one week later. When she returned home, fearing her father's anger, she found a letter from a director's office offering her a role in the film Bits of Life (1921). It would bring Wong her first screen credit. Although Wong's father strongly objected to his daughter's chosen career, he eventually gave in on the condition that an adult escort, often he himself, would accompany the young Wong on the film sets at all times. When she was not in front of the cameras, her father locked her into her room on the set.

At age seventeen, Wong had one of the few romantic lead roles she would ever play in Toll of the Sea (1923), the first Technicolor (an early color film) feature ever made. As a young village girl who marries an American sailor, Wong captured the media's attention for the first time. Reporters began to appear at the laundry in the hopes of catching Wong for an interview or a photo.

International fame came in 1924 with The Thief of Bagdad, in which Wong played an exotic Mongol slave girl opposite star Douglas Fairbanks Sr. (1883–1939). Wong's role embarrassed her family. Although Wong would continue to support her family for many years, she remained close only to her brother, Richard.

The success of Bagdad led to countless new offers. She appeared as an Eskimo in The Alaskan and a Native American girl in Peter Pan. In addition to film roles, Wong also worked as a model. She made a few more films, but soon became aggravated with the roles and with Hollywood's practice of casting non-Asians in the few leading Asian roles. Wong finally fled to Europe where, in London, she costarred with Charles Laughton (1899–1962) in Piccadilly. After the film, director Basil Dean produced a Chinese play, A Circle of Chalk, specifically for Wong. She successfully played opposite the rising new talent, Laurence Olivier (1907–1989), in London's New Theater.

Wong remained in Europe for three years, where she was hailed for her film and stage appearances. In Germany and France, she made foreign versions of her British films, including Germany's first sound picture. She spoke both German and French so fluently that critics could hardly believe they were hearing her voice instead of a native actress. During her career, Wong taught herself to speak English, Chinese, French, German, and Italian.

Wong's next screen role, Daughter of the Dragon, cast her in yet another stereotypical (having to do with opinions based on generalizations) role as the daughter of the infamous Dr. Fu Manchu. Wong then appeared in the thriller Shanghai Express, starring Marlene Dietrich (1901–1992). Wong's portrayal of the bad-girl-turned-good inspired better reviews than Dietrich received. Years later, the star would complain that Wong had upstaged her. 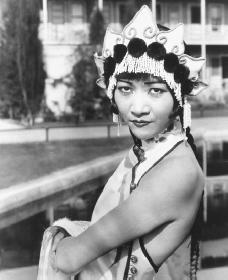 Anna May Wong.
Reproduced by permission of the
Corbis Corporation
.

In 1942, finally fed up with the Hollywood system, Wong retired from films at the age of thirty-five. Throughout the war, she contributed to the war efforts by working for the United China Relief Fund and touring with the United Service Organizations, Inc. (USO; a group that provided entertainment and other services for the U.S. military). During the 1940s and 1950s, Wong took occasional small parts on television, even starring in her own series, Mme. Liu Tsong, in which she played the owner of an international chain of art galleries who was also a sleuth.

Seventeen years after retirement, Wong attempted a film comeback. She returned as Lana Turner's (1920–1995) mysterious housekeeper in the 1950 film, Portrait in Black. In 1961, while she was preparing for the role of the mother in Flower Drum Song, Wong died of a heart attack in her sleep.