American golfer Tiger Woods is the youngest man ever, and the first man of color, to win the Masters Tournament of golf.

Tiger Woods was born Eldrick Woods on December 30, 1975, in Cypress, California. He is the only child of Earl and Kultida Woods. His parents identified their son's talent at an unusually early age. They said that he was playing with a putter before he could walk. The boy was gifted not only with exceptional playing abilities, but he also possessed a passion for the sport. Woods first gained national attention on a talk show when he beat the famed comedian and avid golfer Bob Hope (1903–) in a putting contest. The young boy was only three at the time, and he was quickly hailed as a prodigy, or a child with remarkable talent. Not long after that, when he was five years old, Woods was featured on the popular television show That's Incredible!

Tiger's father has never denied that he devoted his energies to developing his son's talent and to furthering the boy's career as a golfer. During practice sessions, Tiger learned to maintain his composure and to hold his concentration while his father persistently made extremely loud noises and created other distractions. All the while, Tiger's mother made sure that her son's rare talent and his budding golf career would not interfere with his childhood or his future happiness. His mother was a native of Thailand and passed on to her son the mystical ideals of Buddhism, an eastern religion that seeks to go beyond human suffering and existence.

In many ways Woods grew up as a typical middle-class American boy. He developed a taste for junk food and an affection for playing video games. He also spent a fair share of his time clowning around in front of his father's ever-present video camera. As for playing golf, there is no question that the sport was the focus of his childhood. He spent many hours practicing his swing and playing in youth tournaments. Woods was eight years old when he won his first formal competition. From that point he became virtually unstoppable, winning trophies and breaking amateur records everywhere. Media accounts of the boy prodigy had reached nearly legendary proportions by 1994, when he entered Stanford University as a freshman on a full golf scholarship.

During Woods's first year of college, he won the U.S. Amateur title and qualified to play in the Masters tournament in Augusta, Georgia, in the spring of 1995. Although he played as an amateur—not for prize money—Woods's reputation preceded him. By 1996, Woods had won three U.S. Amateur titles, one after another, an amazing accomplishment in itself. Woods was only twenty years old, and in August of 1996, he decided to quit college in order to play professional golf.

Four months later in December, Woods celebrated his twenty-first birthday. He marked the occasion with a legal name change, from Eldrick to Tiger. Woods had been called Tiger by his father even as a youngster. The nickname stuck, and Woods had always been known to his friends, and to the press, as Tiger. It soon became evident that he was destined for success. Sports Illustrated named him 1996 "Sportsman of the Year," and by January of 1997, he had already won three professional tournaments. He was a media sensation.

In April of 1997, only eight months into Woods's professional career, he played in the prestigious (important and famous) Masters tournament held at Georgia's Augusta National Golf Club. The Masters title is perhaps the greatest honor in the world of golf. In addition to hefty prize money, first-place winners are awarded a green blazer to symbolize their membership among the top golfers in the world. 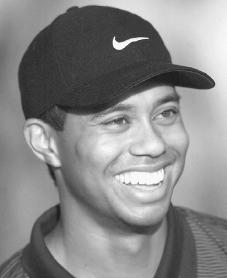 When the tournament was over, Woods had made history as the youngest person ever to win the Masters title. His score was an unprecedented 270 strokes. His victory margin set another record—twelve strokes ahead of the runner-up. This feat was enhanced by the fact that Woods was the first man of color ever to win the title. He accepted all of these honors with grace and humility, and gave tribute to the African American golfers who came before him and helped pave the way. He also honored his mother (who is Asian) by reminding the world of his diverse ethnic background; he is African American, Thai, Chinese, Native American, and Caucasian.

Less than three months passed until July 6, 1997, when Woods won the Western Open, another major golf tournament. Critics credited his amazing success to relentless work and an extraordinary desire to win.

Woods is credited too with popularizing the sport of golf, not only among African American people and other minorities, but among children of all backgrounds. His personal sponsorship of programs for children has been reported for years, and at least one corporate sponsor found that in order to secure an endorsement (an official document of agreement) from Tiger Woods the price would include the added cost of a generous donation to the Tiger Woods Foundation for inner city children.

In 1999 Woods achieved the greatest moment in his career when he won the PGA Championship by one shot. He had been in the lead for most of the tournament, but lost his lead on the last day, making his one stroke victory over Sergio Garcia even more memorable for the crowd that had gathered to watch. Woods continued his success in November 1999 when he shot the best total ever in the World Cup, helping to lead the United States to victory in the tournament. He was also named the PGA Tour Player of the Year for the second time on November 30, 1999, earning more that $6.6 million in prize money during the season.

On January 9, 2000, Woods won the Mercedes Championship. It was his fifth consecutive victory and, at the time, golf's longest winning streak in forty-six years. On February 7, 2000, he extended that streak by winning the Pebble Beach National Pro-Am. He became the first player since Ben Hogan (1912–1997) in 1948 to win six straight tour events. He went on to win the Bay Hill Invitational on March 19, 2000. On June 18, 2000, he won the U.S. Open, his third major championship. The next month, on July 23, he won the British Open, thus winning the Grand Slam. He became the youngest player to win all four major championships and just the fifth ever.

On April 8, 2001, Woods won the sixty-fifth Masters Tournament at the Augusta National Golf Club. The win made him the only golfer in history to hold the four major championship titles at the same time. Woods won the sixty-sixth Masters Tournament on April 14, 2002. At the turn of the twenty-first century, Woods was the most dominant figure in all of sports, and his name will surely be decorated throughout the record books before his career is over.

Owen, David. The Chosen One: Tiger Woods and the Dilemma of Greatness. New York: Simon and Schuster, 2001.