The documented facts about Jan Vermeer's life are few. He was born on October 30 or 31, 1632, in Delft, Netherlands, the second of two children to Digna Baltens and Reynier Jansz. His father was an art dealer and silk weaver who also kept a tavern, and Vermeer probably took over the business after his father's death in 1655. It is presumed that his father, who was actively involved with the local artists and collectors, was an early influence on the young child. Vermeer supposedly began his training as an artist around the mid-1640s.

In 1653 Vermeer married a well-to-do Catholic girl from Gouda; they had eleven children. In the year of his marriage he became a master in the Delft painters' guild (an association), of which he was an officer from 1662 to 1663, and again, from 1669 to 1670. He seems to have painted very little and to have sold only a fraction of his limited production, for the majority of his paintings were still in the hands of his family when he died. His dealings in works by other artists seem to have supported his family reasonably well until he was financially ruined following the French invasion of 1672, when France invaded the Spanish Netherlands. He died in 1675 and was buried on December 15. The following year his wife was forced to declare bankruptcy.

Nothing is known about where Vermeer was educated and trained as a painter. In part because verses written following the death of Carel Fabritius (1622–1654) in 1654 mention Vermeer as his successor as Delft's leading artist, it has been suggested that Fabritius was Vermeer's teacher. Certainly Fabritius helped develop Vermeer's interest in perspective experiments (experiments with depth) 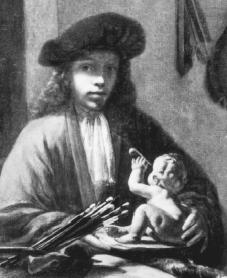 Jan Vermeer.
Reproduced by permision of the
Bridgeman Art Library
.
and his use of a light-flooded wall as a background for figures. But Fabritius lived in Delft only after 1650, by which time Vermeer would have been well on his way toward the completion of his training.

The warm colors of The Procuress relate it to paintings of the Rembrandt school (styled after the painter Rembrandt [1606–1669]) of the 1650s, but its subject matter and composition reflect influence by paintings of the 1620s by the Utrecht Caravaggists, a group of painters in Utrecht, Netherlands, who stressed a new, international style. Considered to be earlier than The Procuress are two pictures that resemble it because of the color scheme, dominated by reds and yellows, and because they are larger in size and scale than Vermeer's later works. Christ in the House of Martha and Mary is similar to compositions by Hendrick Terbrugghen (1588–1629) and Gerrit van Honthorst (1590–1656), who spread the Caravaggesque (having to do with the painting style of Italian painter Caravaggio [c. 1571–1610]) style in Holland. Diana and Her Companions, Vermeer's only mythological subject, is also suggestive of Italy. It is his only painting of figures in a landscape setting.

After these three diverse experiments, which may have owed something to Vermeer's familiarity with works in his father's stock of art, he painted the Girl Asleep at a Table, in which he used the warm range of colors of his other early pictures but in terms of subject matter and composition plunged into the mainstream of current Delft painting.

The Soldier and Laughing Girl, marked the shift between Vermeer's early and mature works in that pointillé (gleaming highlights of thick layers of paint, which brightens the surface) appeared for the first time.

Vermeer's style just before 1660 is also well represented by The Cook. The rich paint surface with its extraordinary quality, the monumental figure perfectly balanced in space and involved in a humble task, and the intense colors dominated by yellow and blue all show Vermeer at the height of his powers.

Following these works, which are assumed to have immediately followed 1660, come the "pearl pictures." The Concert of about 1662 and the Woman with a Water Jug of perhaps a year later display the pleasing charms of this period.

More complicated compositions and especially larger space representations mark the major works of the last decade of Vermeer's life. The Allegory of the Art of Painting (c.1670) is large and complex in both composition and meaning. On the whole it is not influenced by the hardness and dryness that weakened his later works, such as the Allegory of the Catholic Faith.

The quietness, peacefulness, order, and unchanging world of Vermeer's art provide hints of immortality, or the idea that one cannot be affected by death. Perhaps that is why this painter, whose works appear to be as clear as the light of day, has always been thought to be mysterious.

This article had very good description. My art class had to do a project on Mr. Vermeer, and this was a lot of help. Thank you