Henry David Thoreau was an accomplished American writer, as well as an outstanding transcendentalist, a person who seeks to rise above common thought or ideas. He is best known for his classic book, Walden.

Henry David Thoreau was born on July 12, 1817, in Concord, Massachusetts, and lived there most of his life; it became, in fact, his universe. His parents were permanently poor, as his father failed in several business ventures. Thoreau was raised along with three siblings, but his brother's death in 1842 and a sister's death in 1849 deeply affected him. He attended Concord Academy, where his record was good but not outstanding. Nevertheless, he entered Harvard University in 1833 as a scholarship student. Young as he was he established a reputation at Harvard 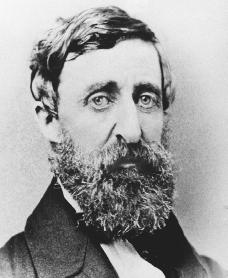 Henry David Thoreau.
Courtesy of the
Library of Congress
.
for being an individualist, one who follows his own will. He was friendly enough with his fellow students, yet he soon saw that many of their values could never become his.

After Thoreau graduated in 1837, he faced the problem of earning a living. He taught briefly in the town school, taught for a longer while at a private school his brother John had started, and also made unsuccessful efforts to find a teaching job away from home. Meanwhile, he was spending a good deal of time writing—he had begun a journal in 1837, which ran to fourteen volumes of close-packed print when published after his death. He wanted, he decided, to be a poet.

America was not supportive of its poets as a rule. Thoreau spent much of his life attempting to do just what he wanted while at the same time surviving, for he wanted to live as a poet as well as to write poetry. He loved nature and could stay indoors only with effort. The beautiful woods, meadows, and waters of the Concord neighborhood attracted him like a drug. He wandered among them by day and by night, observing the world of nature closely and sympathetically. He named himself, half humorously, "inspector of snow-storms and rainstorms."

Thoreau's struggles were watched with compassion by an older Concord neighbor, who was also one of America's great men—Ralph Waldo Emerson (1803–1882). Emerson proved to be Thoreau's best friend. In 1841 Emerson invited Thoreau to live at his home and to make himself useful there only when it would not interfere with his writing. In 1843 he got Thoreau a job tutoring in Staten Island, New York, so that he could be close to the New York City literary market.

Most of the time, however, Thoreau lived at home. A small room was all he needed. He never married, and he required little. At one point he built a cabin at Walden Pond just outside Concord, on land owned by Emerson, and lived in it from 1845 to 1846. There, he wrote much of his book Walden.

Thoreau wrote nature essays both early and late in his career. They range from the "Natural History of Massachusetts" (1842), which is supposedly a review but seems to be a delightful discussion on the world of nature around him, to the poetic "Autumnal Tints" and "Walking" (both 1862), which appeared shortly after his death. He also wrote three rather slender volumes that might be termed travel books: The Maine Woods (1864), Cape Cod (1865), and A Yankee in Canada (1866). Each was made up of essays and was first serialized (arranged and distributed at set times by a publisher) in a magazine. They were published in book form after Thoreau's death on May 6, 1862.

Thoreau's two most interesting books are hard to classify, or sort. They are not travel books, nor are they polemics (arguments to oppose an accepted opinion). The first is A Week on the Concord and Merrimack Rivers (1849), issued at his own expense. As a framework he used two river adventures he and his brother John had made, and he drew heavily from his journal of that time. He filled out the book with other journalizing (keeping a record of), bits of poetry, old college themes, and youthful philosophizing (seeking knowledge). The result was a book that a few enthusiasts (people who follow a special interest) hailed but that the public ignored.

Walden (1854), however, attracted followers from the beginning, and today editions of it crowd the bookshelves of the world. Though basically it is an account of Thoreau's stay beside Walden Pond, it is also many other things. It is a how-to-do-it book, for it tells how to live one's life with a minimum of distasteful labor. It is an apologia, or formal defense. It is a spiritual (or rather, philosophical) autobiography (a book written about oneself). It is a book of seasons. And it is a defiant declaration to the world, for Thoreau was crowing in triumph at his ability to live as he pleased.

Thoreau was, so to speak, a working transcendentalist. Thoreau put his personal stamp on those higher ideals of transcendentalism and translated them into action. For example, when a neighbor wanted to hire him to build a wall, Thoreau asked himself whether this was the best way to use his time and decided it was much better to walk in the woods. Transcendentalists regarded nature, both as symbol and actuality. Thoreau made Mother Nature into something like a deity, or god, and he spent more time in the world of nature than any other transcendentalist.

As Thoreau grew into middle age, he inevitably made a few changes. He had to take over the little family business after his father died, since there was no one else to do it. He did some surveying (mapping out land for development) and he became more of a botanist (one who studies plants) and less of a transcendentalist. His spells of illness increased during the 1850s. By December 1861 he no longer left the Thoreau house. By the next spring he could hardly talk above a whisper. He died on May 6, 1862. In spite of the painful last years of his life, his end was peaceful. "Never saw a man dying with so much pleasure and peace," one of his townsmen observed.

During an elegy (a poem to praise the dead) for Thoreau, Emerson characterized him as a hermit and stoic (unaffected by pleasure or pain), but added that he had a softer side that showed especially when he was with young people he liked. Furthermore, Thoreau was resourceful and ingenious—he had to be, to live the life he wanted. He was patient and had to be to get the most out of nature. He could have been a notable leader, given all of those qualities, but, Emerson remarked sadly, Thoreau chose a different path. Nevertheless, Thoreau was a remarkable man, and Emerson gave him the highest possible praise by calling him wise. "His soul," said Emerson in conclusion, "was made for the noblest society."

This is an amazing article. I'd love to learn more about Th
oreau's life. He's always been an idol of mine. What was his life like as a child? What were his hopes and dreams? What about his siblings? How close were they? Wher did he atart? When did he become famous? Did he ever travel? Did he and john muir ever meet?thank you!