President George Bush (1924–) named Clarence Thomas to the U.S. Supreme Court in 1991. Since joining the Court, Thomas—the second African American to serve on the court—has often voted with the more conservative justices.

Clarence Thomas was born in the tiny coastal town of Pin Point, Georgia, on June 23, 1948. As a very young boy he lived in a one-room shack with dirt floors and no plumbing. When Thomas was two years old, his father walked out on the family. As a result, at the age of seven he and his younger brother were sent to live with their grandfather, Myers Anderson, and his wife in Savannah, Georgia. Anderson, a devout Catholic and active member of the National Association for the Advancement of Colored People (NAACP), sent Thomas to a Catholic school staffed by nuns.

In remarks reported by Jet magazine, Thomas has said that he grew up speaking Gullah, a creole dialect spoken by African Americans on the coastal islands of the southeastern United States. Unlike other Supreme Court justices, he rarely asks questions from the bench during court proceedings. He has said that he developed this habit of silent listening when he was young because he found it a struggle to speak "standard 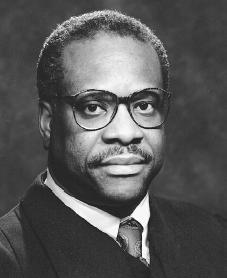 Clarence Thomas.
Courtesy of the
Supreme Court of the United States
.
English" correctly in school. Nevertheless, he was always a strong student.

In 1964 Thomas's grandfather withdrew him from the all-black religious high school he was attending and sent him to an all-white Catholic boarding school in Savannah. Despite being confronted with racism (a dislike or disrespect of a person based on his or her race), Thomas made excellent grades and played on the school's football team. Thomas's grandfather next sent him to Immaculate Conception Seminary (a place for religious education) in northwestern Missouri after his graduation from high school in 1967. Although Thomas was not the only African American student, he still was troubled by poor race relations. A racist remark he overheard about the assassination of Martin Luther King Jr. (1929–1968) caused him to decide that he would not become a priest.

Turning to the law

Thomas left the seminary and enrolled at Holy Cross, a college in Worcester, Massachusetts. There he was a devoted student who also participated on the track team, did volunteer work in the community, and helped found the Black Student Union at Holy Cross. He also met Kathy Ambush, whom he married after graduating in 1971. The couple had one son, but divorced in 1984. (Thomas married his second wife, Virginia Lamp, in 1987.)

Thanks to his excellent academic record, Thomas was admitted to the law schools at Yale, Harvard, and the University of Pennsylvania. He chose Yale because of the financial support it offered him as part of its affirmative action policy to attract students from racial and ethnic minorities. At Yale he continued to do well academically, and he appeared to fit in socially as well. Yet, years later, he described his "rage" and loneliness at feeling snubbed by white people who viewed him as someone who could only attend Yale through an affirmative action program.

Thomas graduated from Yale law school in 1974 and accepted a position on the staff of Missouri's Republican attorney general, John Danforth (1936–). In 1979 he moved to Washington, D.C., and became a legislative assistant to Danforth on the condition that he not be assigned to civil rights issues. His resentment toward some aspects of affirmative action, combined with his grandfather's lessons on self-sufficiency and independence, had moved Thomas into a circle of African American conservatives.

Thomas's conservative ideas soon brought him to the attention of the presidential administration of Ronald Reagan (1911–). In 1981 Thomas was appointed assistant secretary for civil rights in the U.S. Department of Education. Thomas openly stated that minority groups must succeed by their own merit. He asserted that affirmative action programs and civil rights legislation do not improve living standards.

In 1982 Thomas became the chairman of the U.S. Equal Employment Opportunity Commission (EEOC), which was designed to enforce laws against discrimination (unequal treatment based on age, disability, nationality, race, religion, or sex) in the workplace. Thomas served two consecutive terms as chairman, despite having previously sworn he would never work at the EEOC.

In 1990 President George Bush (1924–) appointed Thomas to the Washington, D.C., circuit of the United States Court of Appeals, a common stepping stone to the Supreme Court. Thomas served on this court for only one year. Despite this relatively limited experience, Bush nominated Thomas to replace retiring Supreme Court Justice Thurgood Marshall (1908–1993) on July 1, 1991.

Senate hearings to confirm Thomas's nomination appeared to be moving along smoothly until allegations by Anita Hill, a former EEOC employee, were made public. On October 8, Hill held a press conference in which she made public the main points of testimony she previously had given the Federal Bureau of Investigation (FBI). Protests by some women's groups led the Senate confirmation committee to publicly review Hill's charges.

Hill charged that while she worked at the EEOC nearly a decade earlier Thomas pestered her for dates and told stories in her presence about pornographic film scenes and his own sexual ability. Hill claimed that Thomas's actions made it difficult for her to do her job and caused physical distress. Nevertheless, she continued to contact Thomas voluntarily even after he helped arrange for her appointment as a law professor at the University of Oklahoma.

Hill, Thomas, and witnesses on both sides testified about the allegations during the televised confirmation hearings, which were among the most widely viewed political events in television history. Thomas denied any wrongdoing. He remarked that the process had been a harrowing personal ordeal for him and his wife. Referring to the acts of violence by which whites had terrorized blacks in the American South in which he grew up, Thomas characterized the televised hearings as a "high-tech lynching." In the end, Thomas was confirmed by a 52-48 margin, the smallest—according to Time magazine—by which any justice has been confirmed in the past century.

Hill's allegations helped to make sexual harassment a major political issue. The phrase itself had varying and even conflicting definitions. Nevertheless, local, state, and national laws were passed to stop workplace practices that could make other employees uncomfortable. Meanwhile, articles and books continued to debate whether Hill's specific charges against Thomas were valid.

After joining the Supreme Court, Thomas voted frequently with Justice Antonin Scalia (1936–) and Chief Justice William Rehnquist (1924–), thereby siding with the court's leading conservatives (people who resist change and prefer to keep traditions). Although generally silent during oral arguments at court proceedings, Thomas has been visible in his opinion writing from the beginning. Reviewers of his legal essays and opinions (the written arguments by which court justices explain the reasons for their ruling or their disagreement with the ruling) agree that they are clear, well researched, and consistent. However, African American political groups criticized Thomas for maintaining his conservative values in cases affecting minorities.

For the first few years after his appointment, Thomas tended to keep a low public profile. Starting in 1996, however, he began to make occasional appearances before conservative political groups. Since the election of George W. Bush (1946–) as president in 2000, he has been increasingly hailed as a judicial hero by American conservatives.

This article is well written. I have read about Justice Thomas in the past and have always admired him for his achievements. I never gave any credit to affirmament action because if you read about Clarence's grandfather raising the boy, he has earned every respect shown him. His grandfather was a no nonsense kind of man that gave a lot, but expected a lot. Also most of us whites have never suffered from racism. It is dispicable and beneath any respectful person.