Sun Yat-sen was the leader of China's republican revolution. He did much to inspire and organize the movement that overthrew the Manchu dynasty in 1911—a family of rulers that reigned over China for nearly three hundred years. Through the Kuomintang Party he paved the way for the eventual reunification of the country.

Sun Yat-sen was born on November 12, 1866, into a peasant household in Choyhung in Kwangtung near the Portuguese colony of Macao. His father worked as a farmer, which had been his family's traditional occupation for many generations. His early education, like his birthplace, established him as a man of two worlds, China and the West. After a basic training in the Chinese classics in his village school, he was sent to Hawaii in 1879 to join his older brother. There he enrolled in a college where he studied Western science and Christianity. 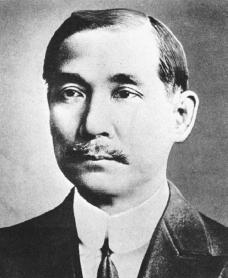 Sun Yat-sen.
Upon graduation in 1882, he returned to his native village. After learning about Christianity, Sun had come to believe that the religious practices in the village where he grew up were nothing more than superstitions. He soon showed these changed beliefs by damaging one of the village idols and was banished from the village.

Though Sun returned home briefly to undergo an arranged marriage, he spent his late teens and early twenties studying in Hong Kong. He began his medical training in Canton, China, but in 1887 returned to Hong Kong and enrolled in the school of medicine. After graduation in June 1892, he went to Macao, where Portuguese authorities refused to give him a license to practice medicine.

By the time Sun returned to Hong Kong in the spring of 1893, he had become more interested in politics than in medicine. Upset by the Manchu government's corruption, inefficiency, and inability to defend China against foreign powers, he wrote a letter to Li Hung-chang (1823–1901), one of China's most important reform leaders (social-improvement leaders), supporting a program of reform. Ignored, Sun returned to Hawaii to organize the Hsing-chung hui (Revive China Society). When war between China and Japan appeared to present possibilities for the overthrow of the Manchus, Sun returned to Hong Kong and reorganized the Hsing-chung hui as a revolutionary secret society. An uprising was planned in Canton in 1895 but was discovered, and several of Sun's men were executed. Having become a marked man, Sun fled to Japan.

The pattern for Sun's career was established: unorganized plots, failures, execution of coconspirators, overseas wanderings, and financial backing for further coups (hostile takeovers). Sun grew a moustache, donned Western-style clothes, and, posing as a Japanese man, set out once again, first to Hawaii, then to San Francisco, and finally to England to visit a former school instructor. Before leaving England, he often visited the reading room of the British Museum, where he became acquainted with the writings of Karl Marx (1818–1893).

Sun returned to Japan in July 1905 to find the Chinese student community stirred to a pitch of patriotic excitement. Joined by other revolutionists such as Huang Hsing and Sung Chiao-jen (1882–1913), Sun organized, and was elected director of, the T'ungmeng hui (Revolutionary Alliance). The T'ung-meng hui was carefully organized, with a sophisticated and highly educated membership core drawn from all over China.

By this time Sun's ideas had developed into the "Three People's Principles"—his writings on nationalism, democracy, and people's livelihood. When Sun returned from another fundraising trip in the fall of 1906, his student following in Japan numbered in the thousands. However, under pressure from the government in China, the Japanese government threw him out.

Sun's fortunes had reached a low point. The failure of a series of poorly planned and armed coups relying upon the scattered forces of secret societies and rebel bands had reduced the reputation of the T'ungmeng hui in Southeast Asia. However, Sun found that Chinese opinion in the United States was turning against his rivals. Sun visited the United States and was on a successful fundraising tour when he read in a newspaper that a successful revolt had occurred in the central Yangtze Valley city of Wuchang, China.

President of the Chinese Republic

By the time Sun arrived back in China on Christmas Day 1911, rebellion had spread through the Yangtze Valley. An uneasy welcome greeted him, and in Nanking, China, revolutionaries from fourteen provinces elected him president of a provisional (temporary) government. On January 1, 1912, Sun Yat-sen proclaimed the establishment of the Republic of China.

The next year a bitter power struggle developed in the Chinese government. On March 20, 1913, Yüan's agents assassinated Sung Chiao-jen at the Shanghai, China, railroad station. Sun hurried back and demanded that those responsible be brought to justice. Yüan resisted, sparking the so-called second revolution. Yüan removed Sun from office and on September 15, 1913, ordered his arrest. By early December, Sun was once again a political refugee (one who is forced to flee) in Japan.

Preparations for a comeback

Sun now began to work for the overthrow of Yüan. However, Yüan was undone by his own mistakes rather than by Sun's plots. His attempt to replace the republic with a monarchy (rule by one) touched off revolts in southwestern China followed by uprisings of Sun's followers in several other provinces. Sun returned to Shanghai in April 1916, two months before Yüan's death.

Following a fruitless quest for Japanese assistance, Sun established a home in Shanghai. There he wrote two of the three treatises (formal writings) later incorporated into his Chien-kuo fang-lueh (Principles of National Reconstruction). In the first part, Social Reconstruction, completed in February 1917, Sun attributed the failure of democracy (rule by the people) in China to the people's lack of practice and application. The second treatise, Psychological Reconstruction, argued that popular acceptance of his program had been obstructed by acceptance of the old saying "Knowledge is difficult, action is easy." The third part, Material Reconstruction, constituted a master plan for the industrialization of China to be financed by lavish investments from abroad.

Once again Sun reorganized his party, this time as the Chinese Kuomintang. He also kept a hand in the political world in Canton, China. When the city was occupied on October 26, 1920, by Ch'en Chiung-ming and other supporters, Sun named Ch'en governor of Kwangtung, China. In April 1921 the Canton Parliament established a new government to rival the Peking government and elected Sun president.

After driving Ch'en from Peking, Sun resumed preparation for the northern expedition, but Ch'en recaptured Canton and forced Sun to flee to a gunboat in the Pearl River. There, in the company of a young military aide named Chiang Kai-shek (1887–1975), Sun tried unsuccessfully to engineer a comeback.

Never one to be discouraged by failure, Sun returned to Shanghai and continued his plans to retake Canton through alliances with northern warlords (military commanders of independent armies). About this time, Sun accepted support from the Soviet Union, a mark of his disappointment with the Western powers and Japan and his need for political, military, and financial aid. Part of the agreement provided for the admission of individual Chinese Communists into the Kuomintang. On January 26, 1923, the Soviet Union guaranteed its support for the reunification of China. This would give Sun the muscle he needed.

Meanwhile Sun's military allies were paving the way for a return to Canton. By the middle of February 1923 Sun was back again as head of a military government. In January 1924 the first National Congress of the Kuomintang approved a new constitution (a formal document which sets the standards for a government), which remodeled the party along Soviet lines. At the top of the party was the Central Executive Committee with bureaus in charge of propaganda (using literature and the media to influence the masses), workers, peasants, youth, women, investigation, and military affairs. Sun's Three People's Principles were restated to emphasize anti-imperialism (domination by a foreign power) and the leading role of the party.

Even the most disciplined party, Sun realized, would be ineffective without a military arm. To replace the unreliable warlord armies, Sun chose the Soviet model of a party army. The Soviets agreed to help establish a military academy, and a mission headed by Chiang kai-shek was sent to the Soviet Union to secure assistance.

However, the lure of warlord alliances remained strong. In response to an invitation from Chang Tso-lin (1873–1928) and Tuan Ch'i-jui (1865–1936), Sun set out for Peking to discuss the future of China. However, negotiations with Tuan Ch'i-jui soon collapsed. This proved to be the last time that Sun would be disappointed by his allies. Following several months of deteriorating health, in late 1924, Sun found that he had incurable cancer.

Sun passed his final days by signing the pithy "political testament," urging his followers to hold true to his goals in carrying the revolution through to victory. He also signed a highly controversial valedictory (farewell address) to the Soviet Union to reaffirm the alliance against Western domination. The following day, March 12, 1925, Sun died in Peking, China. He was given a state funeral under orders of Tuan Ch'i-jui.

Though the guiding spirit of the Chinese revolution, Sun was widely criticized during his lifetime. After his death he became the object of a cult (a following) that elevated him to a sacred position.

Gasster, Michael. Chinese Intellectuals and the Revolution of 1911. Seattle: University of Washington Press, 1969.

Can anyone tell me who was his personal assistant in his last days? I think it might be my grandfather. Just want to be sure. Thanks.