I talian violin maker Antonio Stradivari created instruments that are still considered the finest ever made. The new styles of violins and cellos that he developed were remarkable for their excellent tonal quality and became the basic design for all modern versions of the instruments.

There are no records of Antonio Stradivari's birth, but based on the documentation of his age that accompanied his signature on some of the instruments he created late in his life, it is assumed that he was born in 1644. There is also little known about his youth. He was probably born in Cremona, Italy, the city where his family had been established for five centuries, and he was the son of Alessandro Stradivari. Cremona was a town that had been renowned for its master violin makers for nearly one hundred years. Its leading craftsman during Stradivari's early life was Niccolo Amati, who represented the third generation of his family to contribute to the development of the traditional violin style popular at the time. Stradivari was probably apprenticed (worked to learn a trade) to Amati by the early 1660s and under Amati's direction learned the craft of violin making.

By 1666 Stradivari was producing instruments independently as well as continuing to work at his mentor's (an advisor and guide) shop, which he probably did until Amati's death in 1684. In 1667 he was married to Francesca Feraboschi and set up his own household and shop. The couple eventually had six children and two of their sons would follow in their father's footsteps as violin makers. In the decade or so before 1680 Stradivari created a wide variety of stringed instruments, including guitars, harps, lutes, and mandolins. He continued to follow Amati's basic design for violins, but during this time he began experimenting with improvements in tone and design.

The Stradivari family moved to a new house at No. 2, Piazza San Domenico in 1680, and the building would serve as the violin maker's home and workshop for the rest of his 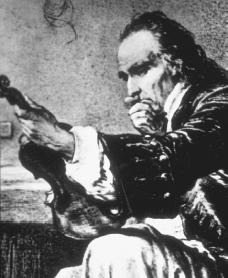 Antonio Stradivari.
Reproduced by permission of
Archive Photos, Inc.
life. Here he matured in his art and created his greatest works, most notably the violins that set the standard for perfection in the music world. In the 1680s he continued to develop his own style, moving away from Amati's design to create a more solid-looking violin made of new materials and finishes. The resulting instruments during this time created a more powerful sound than earlier violins, and musicians from outside Cremona began to seek out instruments from his workshop as his fame grew. Upon Amati's death in 1684, Stradivari was considered the city's greatest violin maker.

Despite Stradivari's considerable success with his designs, he continued to look for ways to improve his violins. He succeeded in finding a deeper, fuller tone that was quite distinct from the lighter sounds of other Cremona instrument makers. Stradivari's wife died in 1698, and she was honored with a large funeral. In the summer of the following year, the craftsman married his second wife, Antonia-Maria Zambelli. He had five more children from this marriage, but none of them ever entered the instrument-making business.

The years from 1700 to 1720 were the greatest of Stradivari's career, and the era was often referred to as the craftsman's "golden period." It was during this time that he perfected his violin design and created his finest instruments. Not only was his design revolutionary, but the materials he used also helped to create his unique effects. He selected excellent wood, such as maple, for his violins and developed the orange-brown varnish that became a trademark of his work. His works from this period were so magnificent that some violins created at this time have developed individual identities and reputations. Some of the most famous include the 1704 "Betts" violin, now in the United States Library of Congress; the 1715 "Alard," which is considered the finest Strativarius in existence; and the 1716 "Messiah," an instrument that Stradivari never sold and is now in the best condition of any of his surviving pieces.

After 1720 Stradivari continued to produce violins and other stringed instruments, but the number of items decreased through the years. While his work maintained a high level of quality, it began to show the effects of failing eyesight and a less steady hand. Stradivari continued producing instruments on his own until his death at the age of ninety-three on December 18, 1737.

I don't know how recent your information is, but it is my understanding that the controversy regarding the authenticity of the Messiah hasn't been solved, and is still up in the air. There are those who believe it is, but I just read an article (on line) by "Soundpost" that seems to have some reservations. Vuillaume is one of the "culprits" who might be responsible for creating a great looking forgery. Personally, I'd like to believe it's the real thing. But it makes for a good story that only a violin enthusiast would enjoy. Maurice Kelhoffer, Boca Raton, FL