Oliver Stone is a writer-director of films with a flashy style that often deal with issues of the 1960s, such as America's involvement with the Vietnam War (1955–75; a war in which the United States aided South Vietnam in its fight against a takeover by Communist North Vietnam). He has won several Academy Awards as a writer and as a director.

Oliver William Stone was born on September 15, 1946, in New York City, the only child of Louis and Jacqueline Goddet Stone. His father was a successful stockbroker. Stone's childhood was marked by all the privileges of wealth—private schooling, summer vacations in France, and most importantly, a sense of patriotism. Stone's father was strongly conservative (one who believes in maintaining social and political traditions and who opposes change). When Stone was a junior at the Hill School, a Pennsylvania college prep academy, his parents decided to divorce. He discovered that his father was actually deeply in debt, which led him to question the values he had been taught. Stone entered Yale University in 1965, but he quit after only one year.

Late in 1965 Stone took a job teaching English at a school in Saigon, South Vietnam. He arrived there at the same time as did the first major commitment of U.S. troops, which were sent to help fight in Vietnam's civil war. Stone left after six months and returned home. While on his way back, he began to work on a novel, which he continued to work on during a brief stay in Mexico and another failed attempt at college. He was unable to find a publisher for it, and he then decided to join the army. Stone continued to work on the novel, which grew to eleven hundred pages. A Child's Night Dream was finally released in 1997.

Stone could have avoided the Vietnam War by staying in college, but he joined the service and insisted on combat duty in an attempt to prove to his father that he was a man. He soon discovered that real combat was much different than he expected. "Vietnam completely deadened me and sickened me," he told the Washington Post. Stone was involved in several deadly battles. He was shot once and wounded by shrapnel (bomb fragments) another time, and he often witnessed the brutal treatment of Vietnamese citizens by U.S. soldiers.

After Stone was discharged and returned to the United States, he enrolled at New York University, where he began to study filmmaking with director Martin Scorsese (1942–). Stone decided he wanted to write screenplays and make movies. Stone graduated from the university in 1971 and within two years had sold his first project to a small Canadian film company. His first writing and directing effort was Seizure (1974), a horror story about a writer whose creations come to life.

Seizure did not make money or receive great reviews, and Stone entered a period marked by heavy drug and alcohol use. He finally pulled himself together in 1976 and decided to write a screenplay about his Vietnam experiences. Between 1976 and 1978 Stone wrote two stories on the war: Platoon, which was based on himself and other soldiers he had known in Vietnam; and Born on the Fourth of July, which was based on the autobiography (the written story of one's own life) of crippled war veteran Ron Kovic. No studio would touch either property; the scripts were considered too violent and too depressing. Stone's writing talents were recognized, however, and he was invited to work on other projects.

In 1977 Stone was hired to write the screenplay for Midnight Express, a drama based on the true-life imprisonment of Bill Hayes in a Turkish jail. Many reviewers criticized the film's violence and accused it of racism (unequal treatment based on race) against the Turks. The controversy (open to dispute) helped the movie turn a profit, and it was also nominated (put forward for consideration) for five Academy Awards. Stone himself won an Oscar for his screenplay.

Stone then wrote and directed the horror movie The Hand (1981), and he wrote scripts for other movies, including Scarface. The film Scarface, which told the story of a ruthless cocaine dealer, offended some with its violence. For Stone, who had rid himself of a cocaine habit while writing the screenplay, it was a very important project. In an effort to exercise more control over his work, Stone then began making films independently. With the backing of Hemdale, a small British production company, he filmed Salvador (1986), based on the violence of the United States-supported Salvadoran army. Hemdale then gave Stone the money to make Platoon (1986). Stone used the script he had written in 1976 and the film won a number of Oscars, including best picture and best director. 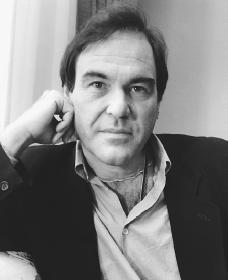 Oliver Stone.
Reproduced by permission of
AP/Wide World Photos
.
the story of a young stockbroker and the ruthless older businessman who influences him. By this time Stone had found the money to film Born on the Fourth of July (1989). With Hollywood superstar Tom Cruise (1962–) as the raging Ron Kovic, who endures not only the horror of battle but life in a wheelchair, Born on the Fourth of July brought Stone yet another Academy Award for best director.

Stone explored the 1960s with The Doors (1991) and his most controversial feature, JFK (1991). In JFK Kevin Costner plays Jim Garrison, the Texas Attorney General who battled what the film views as a plot to cover up the real circumstances behind the assassination of President John F. Kennedy (1917–1963). The film's mixture of dreamlike scenes and historical details angered many, but even his critics admitted that Stone's methods were effective. Stone returned to the subject of Vietnam for Heaven and Earth (1993), showing the war from the point of view of a Vietnamese woman. His brutally violent Natural Born Killers (1994), the story of two disturbed young lovers who become famous for their killing spree, was attacked for its casual treatment of violence.

Stone's next film was the story of another American president, Richard Nixon (1913–1994), who resigned in disgrace after the Watergate scandal (in which it was revealed that Nixon had broken the law by using bugging devices to listen in on the conversations of his opponents). With British actor Anthony Hopkins (1937–) in the title role, Nixon (1995) earned several Academy Award nominations. Many reviewers praised Stone's newly found ability to overlook his political beliefs and make a universally appealing film.

Stone's more recent film projects include directing U-Turn (1997), writing and directing Any Given Sunday (1999), and serving as executive producer of the TV movie The Day Reagan Was Shot (2001). In 2001 a Louisiana court threw out a lawsuit against Stone and Warner Brothers studios that claimed that viewing Natural Born Killers had led two people to shoot a store clerk, leaving her paralyzed. In 2002 Stone traveled to Cuba, where he spent seventy-two hours filming Cuban leader Fidel Castro (1927–) for a documentary (a completely fact-based film) on the country.