The Scottish novelist, essayist, and poet Robert Louis Stevenson was one of the most popular and highly praised British writers during the last part of the nineteenth century.

Robert Louis Stevenson was born on November 13, 1850, in Edinburgh, Scotland, the son of a noted lighthouse builder and harbor engineer. Though healthy at birth, Stevenson soon became a victim of constant breathing problems that later developed into tuberculosis, a sometimes fatal disease that attacks the lungs and bones. These persistent health problems made him extremely thin and weak most of his life.

By the time Stevenson entered Edinburgh University at the age of sixteen to study engineering, he had fallen under the spell of language and had begun to write. For 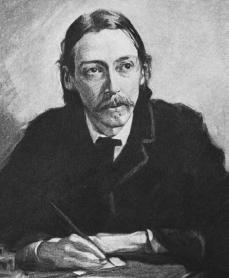 Robert Louis Stevenson.
Courtesy of the
Library of Congress
.
several years he attended classes irregularly, developing a bohemian existence (an artistic lifestyle different than that of mainstream society), complete with long hair and velvet jackets. He also associated himself with Edinburgh's seedy and dangerous neighborhoods.

When Stevenson was twenty-one years old, he openly declared his intention of becoming a writer, against the strong opposition of his father. Agreeing to study law as a compromise, in 1875 Stevenson was admitted to the Scottish bar, an organization for lawyers. Having traveled to the European mainland several times for health and pleasure, he now swung back and forth between Scotland and a growing circle of artistic and literary friends in London, England, and Paris, France. Stevenson's first book, An Inland Voyage (1878), related his adventures during a canoe trip on Belgium and France's canals.

In France in 1876 Stevenson met an American woman named Fanny Osbourne. Separated from her husband, she was eleven years older than Stevenson and had two children. Three years later Stevenson and Osbourne were married. After accompanying his wife to America, Stevenson stayed in an abandoned mining camp, later recounted in The Silverado Squatters (1883). A year after setting out for the United States, Stevenson was back in Scotland. But the climate there proved to be a severe hardship on his health, and for the next four years he and his wife lived in Switzerland and in the south of France. Despite his health, these years proved to be productive. The stories Stevenson collected in The New Arabian Nights (1883) and The Merry Men (1887) range from detective stories to Scottish dialect tales, or tales of the region.

Treasure Island (1881, 1883), first published as a series in a children's magazine, ranks as Stevenson's first popular book, and it established his fame. A perfect romance, according to Stevenson's formula, the novel tells the story of a boy's involvement with murderous pirates. Kidnapped (1886), set in Scotland during a time of great civil unrest, has the same charm. In its sequel, David Balfour (1893), Stevenson could not avoid psychological and moral problems without marked strain. In The Strange Case of Dr. Jekyll and Mr. Hyde (1886) he dealt directly with the nature of evil in man and the hideous effects that occur when man seeks to deny it. This work pointed the way toward Stevenson's more serious later novels. During this same period he published a very popular collection of poetry, A Child's Garden of Verses (1885).

After the death of Stevenson's father in 1887, he again traveled to the United States, this time for his health. He lived for a year at Saranac Lake, New York, in the Adirondack Mountains. In 1889 Stevenson and his family set out on a cruise of the South Sea Islands. When it became clear that only there could he live in relatively good health, he settled on the island of Upolu in Samoa. He bought a plantation (Vailima), built a house, and gained influence with the natives, who called him Tusifala ("teller of tales"). By the time of his death on December 3, 1894, Stevenson had become a significant figure in island affairs. His observations on Samoan life were published in the collection In the South Seas (1896) and in A Footnote to History (1892). Of the stories written in these years, "The Beach of Falesá" in Island Nights' Entertainments (1893) remains particularly interesting as an exploration of the confrontation between European and native ways of life.