Haile Selassie was an emperor of Ethiopia whose influence as an African leader far surpassed the boundaries of his country. Although his popularity declined near the end of his sixty-year reign, Selassie remains a key figure in turning Ethiopia into a modern civilization.

Haile Selassie was born Tafari Makonnen on July 23, 1892, the son of Ras Makonnen, a cousin and close friend of Emperor Menilek II. Baptized Lij Tafari, he is believed to be a direct descendant of King Solomon and the Queen of Sheba, two ancient rulers from the tenth century B.C.E. Raised as a Christian, Tafari was educated by private European tutors.

Haile Selassie spent his youth at the imperial court (court of the emperor) of Addis Ababa, Ethiopia. Surrounded by constant political plots, he learned much about the wielding of power. Menilek no doubt recognized Tafari's capacity for hard work, his excellent memory, and his mastery of detail. The emperor rewarded the youth's intellectual and personal capabilities by appointing him, at the age of fourteen, the governor of Gara Muleta in the province of Harar. When he was twenty, the emperor appointed him dejazmatch (commander) of the extensive province of Sidamo.

Upon the death of Menilek in 1913, his grandson, Lij Yasu, succeeded to (gained) the throne. Yasu's apparent conversion to the religion of Islam alienated the national Christian church and gave its favor to the opposition movement led by Ras Tafari (as Haile Selassie was now named). The movement joined noblemen and high church officials in stripping Yasu of the throne in 1916. Zawditu, the daughter of Menilek, then became empress, with Ras Tafari appointed regent (acting ruler while the empress was away) and heir to the throne.

Throughout the regency the empress, conservative in nature and more concerned with religion than politics, served as opposition to Ras Tafari's rising interest in turning the country into a more modern nation. The result was an uneasy decade-long agreement between conservative and reforming forces (forces looking to make social improvements).

In 1926 Tafari took control of the army, an action that made him strong enough to assume the title of negus (king). Assuming this title was made possible, in part, by his success in international affairs, namely the admission of Ethiopia in 1923 to the League of Nations, a multinational organization aimed at world peace following World War I (1914–1918; a war fought mostly in Europe involving most countries on that continent and the United States). When Zawditu died in April 1930, Tafari demanded the title negasa negast (king of kings) and took complete control of the government with the throne name of Haile Selassie I ("Power of the Trinity").

In 1931 the new emperor began to develop a written constitution (a system of basic laws of a country) to symbolize his interest in modernization and intention to increase the power of the government, which had been weakening since the death of Menilek. Haile Selassie's efforts were cut short, however, when Benito Mussolini's (1883–1945) Italy invaded the country in 1935. The Italian military used superior weaponry, airplanes, and poison gas to crush the ill-fated resistance led by the emperor. After the invasion, a fascist regime (a country under the control of an all-powerful ruler) occupied the country and marked the first loss of national independence in recorded Ethiopian history. In 1936 Haile Selassie went into exile, meaning he was forced out of the country. While in England he unsuccessfully went to the League of Nations for help.

In early 1941 British forces, aided by the heroic Ethiopian resistance, freed the country from Italian control, enabling Haile Selassie to triumphantly reenter his capital in May. The Italian colonial administration, backed by force and with a vastly improved road network, meant that the emperor returned to find a great deal of his government's independence had been destroyed, leaving him in certain ways stronger than before he left.

Throughout the next decade he rebuilt the administration; improved the army; passed legislation to regulate the government, church, and financial system; and further extended his control of the provinces (government territories) by crushing uprisings in Gojjam and Tigre. But in general the emperor had gradually grown more cautious, and he allowed few new leaders into his government. 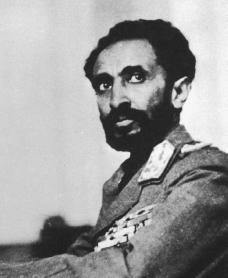 Haile Selassie.
Courtesy of the
Library of Congress
.

In the 1950s Haile Selassie worked to absorb into Ethiopia the important Red Sea province of Eritrea (this was accomplished in 1962). Later he founded the University College of Addis Ababa, and welcomed home many Ethiopian college graduates from abroad. His Silver Jubilee (celebration of twenty-five years in power) in 1955 served as the occasion to present a revised constitution, followed in 1957 by the first general election. Haile Selassie's continued work to hold political balance between several major politicians as well as his efforts to shut out new politicians who still found few places in government, eventually led opposing elements to attempt a government coup (takeover) in December 1960. The coup failed, but it gave a short and violent message to the unchanging Ethiopian politics and hinted of future possibilities.

In the 1960s the emperor was clearly recognized as a major force in the pan-African movement (a movement dedicated to a united Africa), demonstrating his remarkable capacity for adapting to changing circumstances. It was a great personal triumph for him when, in 1963, the newly founded Organization of African Unity established its headquarters in Addis Ababa. Unlike other African leaders, Haile Selassie, of course, had not had to struggle once in office to prove his legitimate authority to his people. Rather, his control of government for more than forty years had given him enough time to demonstrate his strength.

By 1970 the emperor had slowly withdrawn from many day-to-day workings of the government and had become increasingly involved with foreign affairs. He probably made more state visits than any other head of state, enjoying such trips for their own sake even when they had little practical use. To him foreign relations brought admiration from around the world.

At home Haile Selassie showed more caution than ever in his approach to modernization. Though warm to Western advancements, throughout his long reign he never advanced faster than what was agreed upon among his peers. However, by his fortieth year in power he appeared to be more concerned with adjusting to change than with enacting change himself.

A famine, or devastating shortage of food, in Wello province in 1973 seriously hurt the reputation of Selassie's leadership. With a strain on the nation, Selassie was forced to abdicate (step down from power) on September 13, 1974. The eighty-year-old emperor Selassie spent his final year of life under house arrest (restricted to one's house by court order). His death was announced on August 27, 1975. The man who led Ethiopia for sixty years—through some of the nation's darkest times—did not even have a funeral service. The exact location of his grave has never been revealed.

This is a great biography. Very factual. I'm using this as a source for my report on Selassie. thanks a lot. this was a big help.