The French philosopher and distinguished writer Jean-Paul Sartre ranks as the most versatile writer and as the dominant influence in three decades of French intellectual life.

Jean-Paul Sartre was born in Paris, France, on June 21, 1905. His father, a naval officer, died while on a tour of duty in Indochina before Sartre was two years old. His mother belonged to the Alsatian Schweitzer family and was a first cousin to the famous physician Albert Schweitzer (1875–1925). The young widow returned to her parents' house, where she and her son were treated as "the children." In the first volume of his autobiography, The Words (1964), Sartre describes his "unnatural" childhood as a spoiled and an unusually intelligent boy. Lacking any companions his own age, the child found "friends" exclusively in books. He began reading when he was a very young boy. Reading and writing thus became his twin passions. "It was in books that I encountered the universe," he once said.

Sartre received much of his early education from tutors. He entered the école Normale Supérieure at the University of Paris in 1924 and graduated in 1929. While there, he met the novelist Simone de Beauvoir (1908–1986), and the two formed a close relationship that lasted thereafter. After completing required military service, Sartre took a teaching job at a lycée (public secondary school) in Le Havre, France. There he wrote his first novel, Nausea (1938), which some critics have called the century's most influential French novel.

From 1933 to 1935 Sartre was a research student at the Institut Français in Berlin and Freiburg, Germany. He discovered the works of Edmund Husserl (1859–1938) and Martin Heidegger (1889–1976) and began to philosophize on phenomenology, or the study of human awareness. A series of works on the models of consciousness poured from Sartre's pen: two works on imagination, one on self-consciousness, and one on emotions. He also produced a first-rate volume of short stories, The Wall (1939).

Sartre returned to Paris to teach in a lycée and to continue his writing, but this was interrupted by World War II (1939–45; a war in which France, Great Britain, the Soviet Union, the United States and other countries fought against Germany, Italy, and Japan). Called up by the army, he served briefly on the Eastern front and was taken prisoner. After nine months he secured his release and returned to teaching in Paris, where he became active in the Resistance, a secret French group dedicated to removing the occupying German army. During this period he wrote his first major work in philosophy, Being and Nothingness: An Essay in Phenomenological Ontology (1943).

After the war Sartre abandoned teaching, determined to support himself by writing. He was also determined that his writing and thinking should be engaging, or intellectually activating. Intellectuals, he thought, must take a public stand on every great question of their day. He thus became fundamentally a moralist (a teacher of right and wrong), both in his philosophical and literary works.

Sartre had turned to playwriting and eventually produced a series of theatrical successes which are essentially dramatizations of ideas, although they contain some finely drawn characters and lively plots. The first two, The Flies and No Exit, were produced in occupied Paris. They were followed by Dirty Hands (1948), usually called his best play; The Devil and the Good Lord (1957), an insulting, anti-Christian rant; and The Prisoners of Altona (1960), which combined convincing character portrayal with telling social criticism. Sartre also wrote a number of comedies: The Respectful Prostitute (1946), Kean (1954), and Nekrassov (1956), which the critic Henry Peyre claimed "reveals him as the best comic talent of our times." 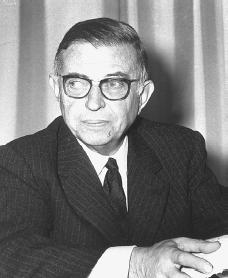 Jean-Paul Sartre.
Reproduced by permission of
AP/Wide World Photos
.
and a large number of reviews and criticisms. He also edited Les Temps modernes.

Though never a member of the Communist Party (a political party that believes goods and services should be controlled by a strong government), Sartre usually sympathized with the political views of the (liberal) far left. Whatever the political issue, he was quick to publish his opinions, often combining them with public acts of protest.

In 1960 Sartre returned to philosophy, publishing the first volume of his Critique of Dialectical Reason. It represented essentially a modification of his existentialist ideas, or a philosophy that stresses the importance of the individual experience. The drift of Sartre's earlier work was toward a sense of the uselessness of life. In Being and Nothingness he declared man to be "a useless passion," forced to exercise a meaningless freedom. But after World War II, his new interest in social and political questions gave way to more optimistic and activist views.

Sartre was always controversial yet respected. In 1964 he was awarded but refused to accept the Nobel Prize in literature. Sartre suffered from declining health throughout the 1970s and died from lung problems in 1980. He is remembered as one of the most influential French writer of the twentieth century.