The pioneering work of Margaret Sanger, an American crusader for scientific contraception (birth control), family planning, and population control, made her a world-renowned figure.

Margaret Higgins Sanger was born Margaret Higgins on September 14, 1884, in Corning, New York. Her father was a fun-loving freethinker. Her mother was a devoted Roman Catholic who had eleven children before dying of tuberculosis, a deadly disease that attacks the lungs and bones. Margaret was greatly influenced by her father's political views in support of women's suffrage (the right to vote) and tax reform (improvements), although these and other beliefs caused the family to be seen as radical (extreme) in the eyes of their neighbors.

After graduating from the local high school and from Claverack College at Hudson, New York, Margaret took a teaching position in New Jersey, until she was forced to return home to care for her dying mother. Her mother's death in 1896 left her with a deep sense of dissatisfaction concerning her own and society's medical ignorance. Soon afterwards Margaret moved to White Plains, New York, where she took nurse's training. She then moved to New York City and served in the extremely poor conditions in the slums of its Lower East Side. In 1902 she married William Sanger. Although Margaret herself was plagued by tuberculosis, she had her first child, a son, the next year. The couple had another son, as well as a daughter who died in childhood.

Margaret Sanger's experiences with slum mothers who begged for information about how to avoid more pregnancies transformed her into a social radical. She joined the Socialist Party, a political party that believes the government should own and distribute all goods, began attending radical rallies, and read everything she could about birth control practices. She became convinced that oversized families were the basic cause of poverty. In 1913 she began publishing a monthly newspaper, the Woman Rebel, in which she passionately urged family limitation and first used the term "birth control." After only six issues, she was arrested and charged with distributing "obscene" literature through the mails. She fled to Europe, where she continued her birth control studies, visiting clinics and talking with medical researchers.

Sanger returned to the United States in 1916 and, after charges against her were dropped, she began nationwide lecturing. In New York City she and her partners opened a birth control clinic in a slum area to give out materials and information about birth control. This time she was arrested under state law. She spent a month in prison, as did her sister. Leaving prison in 1917, Sanger intensified her activities, lecturing and raising money from a group of wealthy patrons (supporters) in New York, and launching the Birth Control Review, which became the voice of her movement for twenty-three years. Encouraged by a state court decision that loosened New York's anticontraceptive law, she shifted her movement's emphasis from direct action and open resistance to efforts to secure more flexible state and federal laws. Although regularly in trouble with New York City authorities, she continued lecturing to large crowds and keeping in touch with European contraceptive research. Her visit to Japan in 1922 was the first of several Asian trips. A year later she and her friends opened clinical research bureaus to gather medical histories and dispense birth control information in New York City and Chicago, Illinois. By 1930 there were fifty-five clinics across the United States. Meanwhile Sanger divorced her husband and married J. Noah H. Slee.

Margaret Sanger's fame became worldwide in 1927, when she helped organize and spoke before the first World Population Conference at Geneva, Switzerland. She and her followers continued to lobby for freer state and federal laws on contraception and for the distribution of birth control knowledge through welfare programs. By 1940 the American birth control movement was operating a thriving clinic program and enjoying general acceptance by the medical profession and an increasingly favorable public attitude.

For most Americans, Margaret Sanger was the birth control movement. During World War II (1939–45), when European forces and the United States clashed with Germany, Italy, and Japan, her popularity continued to grow, despite her opposition to American participation in the war. (Sanger strongly believed that wars were the result of excess national population growth.) In 1946 she helped found the International Planned Parenthood Federation. This was one of her last great moments. She was troubled by a weak heart during her last twenty years, but she 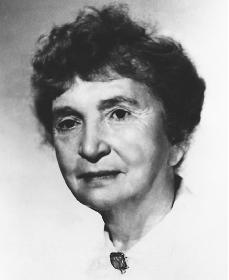 Is this real? Margaret Higgins was born 1884. She graduated from high school and college, and then came home to care for her sick mother who died in 1896. She was 12! This has got to be an error or she was a genius (I doubt!)!
Please double check article and info.
2
Kris

Wow! What a scrubbed version of Margaret Sanger. Here are some Sanger quotes:

On blacks, immigrants and indigents:
"...human weeds,' 'reckless breeders,' 'spawning... human beings who never should have been born." Margaret Sanger, Pivot of Civilization, referring to immigrants and poor people

On the extermination of blacks:
"We do not want word to go out that we want to exterminate the Negro population," she said, "if it ever occurs to any of their more rebellious members."

On the purpose of birth control:
The purpose in promoting birth control was "to create a race of thoroughbreds," she wrote in the Birth Control Review, Nov. 1921 (p. 2)

"The most merciful thing that a large family does to one of its infant members is to kill it."
Margaret Sanger, Women and the New Race
(Eugenics Publ. Co., 1920, 1923)

On the rights of the handicapped and mentally ill, and racial minorities:
"More children from the fit, less from the unfit -- that is the chief aim of birth control." Birth Control Review, May 1919, p. 12

On the right of married couples to bear children:
Couples should be required to submit applications to have a child, she wrote in her "Plan for Peace." Birth Control Review, April 1932

Margaret Sanger was a racist, a eugenicist & a lover of Hitler. She wanted all "feeble minded" people forcibly sterilized & sent off to an island somewhere away from the general population.

This woman was evil to the core. Yet some insist on scrubbing her image & touting her as some hero because of birth control. Shame on this site for scrubbing the image of the real Margaret Sanger.
3
ensitue

Sanger was traumatized when two drunk men (hoboes) broke into her childhood home, stabbed, beat and raped her mother who had TB and died a few years later. This horrible experience affected Sanger and induced her extremist eugenic views which posited that behavior is determined by breeding/heredity, this was the foundation of her campaign to sterilize entire populations in America, and under FDR this very near became a reality.
4
Margaret Kubo

This is the most ridiculous article I have ever read. It makes Margaret Sanger sound like a perfect saint. She indeed was very hateful of anyone who was not "white," the very epitome of a racist. Her idea of birth control was to abort for any and all reasons especially if the pregnant women were "Negros." You cannot change or erase historical facts to make someone look good, who was, indeed, very evil.