The American astronomer Carl Sagan studied the surfaces and atmospheres of the major planets, conducted experiments on the origins of life on Earth, made important contributions to the debate over the environmental consequences 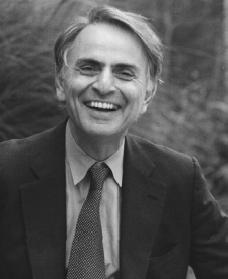 Carl Sagan.
Reproduced by permission of
AP/Wide World Photos
.
of nuclear war, and wrote a number of popular books explaining developments in astronomy, biology, and psychology.

Carl Edward Sagan was born on November 9, 1934, in New York City to Samuel and Molly Sagan. His father was a factory manager. As a child Carl was fascinated with the stars. By age nine he was an amateur astronomer and felt certain there was life on other planets. At age twelve he announced to his grandfather his intention to become an astronomer. However, it was not until he was a sophomore in high school that he realized that astronomers actually got paid for their work.

The family later moved to Rahway, New Jersey, where Carl graduated from high school in 1951. He was voted "most likely to succeed" and "most outstanding male student." With the help of several scholarships, he studied astronomy at the University of Chicago. He was captain of a championship intramural basketball team and president of the Astronomical Society, which he had founded. He received a bachelor of arts degree with special honors in the natural sciences in 1954, a bachelor of science degree in physics in 1955, and his doctorate in 1960.

Over the next ten years Sagan held teaching and/or research posts at the University of California at Berkeley, Harvard University, the Smithsonian Astrophysical Observatory, and Stanford University. In 1970 he became director of Cornell University's Laboratory for Planetary Studies and David Duncan Professor of Astronomy and Space Science. In addition to his academic appointments Sagan served as a consultant to the National Aeronautics and Space Administration (NASA) and was closely associated with the unmanned (without astronauts onboard) space missions to Venus, Mars, Jupiter, and Saturn.

The surface and atmosphere of Venus

Sagan's first major research effort was an investigation of the surface and atmosphere of Venus. In the late 1950s the general scientific view was that the surface of Venus was relatively cool and that life of some sort might exist on the planet. Radio emissions had been observed and it was thought that they came from the activity of charged particles located in an atmospheric layer.

Sagan overturned these ideas in 1961 by showing that the emissions could be caused by a very hot surface temperature, over 300 degrees Centigrade (572 degrees Fahrenheit), in which life could not exist. He said the high temperatures were caused by a "greenhouse effect," in which the sun's heat was trapped between the planet's surface and its carbon dioxide cloud cover. These ideas were confirmed by an exploratory space vehicle sent to Venus by the Soviet Union in 1967.

The physical characteristics of the surface of Mars have long interested astronomers and science fiction writers. Telescopic observation of the planet revealed distinctive bright and dark areas on its surface. This led some to guess that large regions of Mars were covered with plants that change with the seasons.

In the mid-twentieth century, radar and other new means of observation were used to gather information on the topography (surface features), temperature, wind speeds, and atmosphere of Mars. Reviewing this newly collected data, Sagan concluded that the bright regions were lowlands filled with sand and dust blown by the wind and that the dark areas were elevated ridges or highlands.

The origins of life

Sagan also investigated the origins of life on Earth and championed the study of exobiology (the biology of extraterrestrial life). In the mid-1950s Harold Urey and Stanley Miller had successfully produced key organic compounds in the laboratory by recreating the physical and chemical conditions that were common on Earth shortly before the first forms of life appeared. Building upon this research, Sagan exposed a mixture of methane, ammonia, water, and hydrogen sulfide to radiation. This had the effect of producing amino acids and adenosine triphosphate (ATP), complex chemical compounds that are crucial to living cells.

It is not his scientific achievements but his popular books and his television appearances that made Sagan a well-known public figure. In 1973 he published The Cosmic Connection, a lively introduction to space exploration and the search for extraterrestrial life. Four years later he published his Pulitzer Prize-winning book on the evolution of the human brain, The Dragons of Eden.

Another of Sagan's books, Cosmos (1980), deserves notice because it was written in conjunction with his well-received television series of the same name. In this work Sagan offered a brief history of the physical universe, showed how the universe came to be understood with the help of modern science, and warned that the Earth was in danger of being destroyed by a nuclear disaster.

In December of 1983 Sagan, with colleagues R. P. Turco, O. B. Toon, T. P. Ackerman, and J. B. Pollack, published "Nuclear Winter: Global Consequences of Multiple Nuclear Explosions." The article stated that in a nuclear war tremendous quantities of soot and dust would be injected into the atmosphere to form a gigantic black cloud covering most of the Northern Hemisphere. This cloud would reduce the incoming sunlight by more than 95 percent for a period of several weeks and affect the climate on Earth for a number of years thereafter. During the cold, dark nuclear winter the vegetation which animals and humans need for sustenance (nourishment) would be seriously depleted and great harm would be done to the environment and to human society.

Sagan continued to work and speak about science until his death in Seattle, Washington, on December 20, 1996, of pneumonia brought on by a rare bone marrow disease.

Sagan once said that his own sense of wonder, combined with the encouragement his parents showed for pursuing unusual interests, were the factors that led him to his choice of work. He was best known for popularizing science, presenting it in generally understandable or interesting form. It is a fitting tribute that the Mars Pathfinder lander was renamed the Dr. Carl Sagan Memorial Station when it touched down on the surface of Mars in July of 1997.