The French painter Pierre Auguste Renoir was one of the central figures of the impressionist movement (a French art movement of the second half of the nineteenth century whose members sought in their works to represent the first impression of an object upon the viewer). His work is characterized by a richness of feeling and a warmth of response to the world and to the people in it.

Pierre Auguste Renoir was born in Limoges, France, on February 25, 1841, the sixth of Léonard Renoir and Marguerite Merlet's seven children. His father was a tailor, and his mother was a dressmaker. His family moved to Paris, 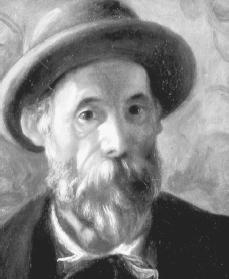 Pierre Auguste Renoir.
Reproduced by permission of the
Corbis Corporation
.
France, in 1844. Because he showed a remarkable talent for drawing, Renoir became an apprentice (one who works for someone in order to learn his or her trade) in a porcelain factory, where he painted plates. Later, after the factory had gone out of business, he worked for his older brother, decorating fans. Throughout these early years Renoir made frequent visits to the Louvre (the world's largest and most famous art museum, located in Paris), where he studied the art of earlier French masters, particularly those of the eighteenth century—Antoine Watteau (1684–1721), François Boucher (1703–1770), and Jean Honoré Fragonard (1732–1806). His deep respect for these artists influenced his own painting throughout his career.

In 1862 Renoir decided to study painting seriously and entered the studio of the painter Charles Gleyre, where he met other artists such as Claude Monet (1840–1926), Alfred Sisley (1839–1899), and Jean Frédéric Bazille (1841–1870). During the next six years Renoir's art showed the influence of Gustave Courbet (1819–1877) and Édouard Manet (1832–1883), the two most innovative (doing things in a new way) painters of the 1850s and 1860s. Courbet's influence is especially evident in the bold Diane Chasseresse (1867), while Manet's influence can be seen in the flat tones of Alfred Sisley and His Wife (1868). Still, both paintings reveal a sense of intimacy (closeness) that is characteristic of Renoir's personal style.

The 1860s were difficult years for Renoir. At times he was too poor to buy paints or canvas, and the Salons (exhibitions, or displays) of 1866 and 1867 rejected his works. The following year the Salon accepted his painting Lise, a portrait (picture of a person, especially their face) of his girlfriend, Lise Tréhot. He continued to develop his work and to study the paintings of other artists of the day—not only Courbet and Manet, but Camille Corot (1796–1875) and Eugène Delacroix (1798–1863) as well. Renoir's debt to Delacroix is apparent in the lush (appealing to the senses) Odalisque (1870).

A revolution was beginning in French painting. A number of young painters began to rebel against the traditions of Western painting and went directly to nature for their inspiration and into the actual society of which they were a part. As a result, their works revealed a look of freshness that in many ways departed from the look of Old Master painting. The new art displayed bright light and color instead of the solemn browns and blacks of previous painting. These qualities, among others, signaled the beginning of impressionist art.

In 1869 Renoir and Monet worked together at La Grenouillère, a bathing spot on the river Seine. Both artists became interested in painting light and water. According to Phoebe Pool (1967), this was a key moment in the development of impressionism, for it "was there that Renoir and Monet made their discovery that shadows are not brown or black but are coloured by their surroundings, and that the 'local colour' of an object is modified by the light in which it is seen, by reflections from other objects and by contrast with juxtaposed [placed side by side] colours."

The styles of Renoir and Monet were almost identical at this time, a sign of the dedication with which they pursued and shared their new discoveries. During the 1870s they continued to work together at times, although their styles generally developed in more personal directions. In 1874 Renoir participated in the first impressionist exhibition; his works included the Opera Box. Of all the impressionists, Renoir most thoroughly adapted the new style to the great tradition of figure painting.

Although the impressionist exhibitions were the targets of much public scorn during the 1870s, Renoir's popularity gradually increased during this time. He became a friend of Caillebotte, one of the first supporters of the impressionists, and he was also backed by several art dealers and collectors. The artist's connection with these individuals is documented by a number of handsome portraits, for instance, Madame Charpentier and Her Children (1878). In the 1870s Renoir also produced some of his most celebrated impressionist scenes, including the Swing and the Moulin de la Galette (both 1876). These works show men and women together, openly and casually enjoying a society bathed in warm sunlight. Figures blend softly into one another and into their surrounding space. These paintings are pleasurable and full of human feeling.

During the 1880s Renoir began to separate himself from the impressionists, largely because he became unhappy with the direction the new style was taking in his own hands. In paintings like the Luncheon of the Boating Party (1880–81), he felt that his style was becoming too loose and that forms were becoming less distinct. As a result, he looked to the past for a fresh inspiration. In 1881 he traveled to Italy and was particularly impressed by the art of Raphael (1483–1520).

During the next six years Renoir's paintings became increasingly dry: he began to draw in a tight, classical manner, carefully outlining his figures in an effort to give them increased clarity. The works from this period, such as the Umbrellas (1883) and the Grandes baigneuses (1884–87), are generally considered the least successful of Renoir's mature expressions.

By the end of the 1880s Renoir had passed through his dry period. His late work is truly remarkable: a glorious outpouring of nude figures, beautiful young girls, and lush landscapes. Examples of this style include the Music Lesson (1891), Young Girl Reading (1892), and Sleeping Bather (1897). In many ways, the generosity of feeling in these paintings expands on the achievements of his great work in the 1870s.

Renoir's health declined severely in his later years. In 1903 he suffered his first attack of arthritis (a painful swelling of the joints) and settled for the winter at Cagnes-sur-Mer, France. The arthritis made painting painful and often impossible. Still, he continued to work, at times with a brush tied to his crippled hand. Renoir died at Cagnes-sur-Mer on December 3, 1919, but not before an experience of supreme triumph: the state had purchased his portrait Madame Georges Charpentier (1877), and he traveled to Paris in August to see it hanging in the Louvre.

woah this is amazing, i used most of it for my art assignment but in my own words of course!