The Greek philosopher, scientist, and religious teacher Pythagoras developed a school of thought that accepted the passage of the soul into another body and established many influential mathematical and philosophical theories.

Born on the island of Samos, off Greece, in the Mediterranean Sea, Pythagoras was the son of Mnesarchus. Little is known about his early life. After studying in Greece, he fled to southern Italy to escape the harsh rule of Polycrates (died c. 522 B.C.E. ), who came to power about 538 B.C.E. Pythagoras is said to have traveled to Egypt and Babylon during this time.

Pythagoras and his followers became politically powerful in Croton in southern Italy, where Pythagoras had established a school for his newly formed sect, or group of followers. It is probable that the Pythagoreans took positions in the local government in order to lead men to the pure life that was directed by their teachings. Eventually, however, a rival group launched an attack on the Pythagoreans at a gathering of the sect, and the group was almost completely destroyed. Pythagoras either had been forced to leave Croton or had left voluntarily shortly before this attack. He died in Metapontum early in the fifth century B.C.E.

Pythagoras and his followers were important for their contributions to both religion and science. His religious teachings were based on the doctrine (teaching) of metempsychosis, which teaches that the soul never dies and is destined to a cycle of rebirths until it is able to free itself from the cycle through the purity of its life.

Pythagoreanism differed from the other philosophical systems of its time in being not merely an intellectual search for truth but a whole way of life which would lead to salvation, or to be delivered from sin. An important part of Pythagoreanism was the relationship of all life. A universal life spirit was thought to be present in animal and vegetable life, although there is no evidence to show that Pythagoras believed that the soul could be born in the form of a plant. It could be born, however, in the body of an animal, and Pythagoras claimed to have heard the voice of a dead friend in the howl of a dog being beaten.

The Pythagoreans presented as fact the dualism (that life is controlled by opposite forces) between Limited and Unlimited. It 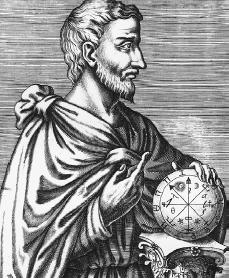 Pythagoras.
Reproduced by permission of the
Corbis Corporation
.
was probably Pythagoras who declared that numbers could uncover the secrets of the universe, limiting and giving shape to matter (anything that takes up space). His study of musical intervals, leading to the discovery that the chief intervals can be expressed in numerical ratios (relationships between numbers) between the first four integers (positive whole numbers), also led to the theory that the number ten, the sum of the first four integers, embraced the whole nature of number.

So great was the Pythagoreans' respect for the "Tetractys of the Decad" (the sum of 1 + 2 + 3 + 4) that they swore their oaths (promises) by it rather than by the gods, as was normal during his day. Pythagoras may have discovered the theorem which still bears his name (in right triangles [triangle with one angle equal to 90 degrees], the square on the hypotenuse equals the sum of the squares on the other sides), although this proposal has been discovered on a writing stone dating from the time of the Babylonian king Hammurabi (died c. 1750 B.C.E. ). Regardless of their sources, the Pythagoreans did important work in extending the body of mathematical knowledge.

As a more general outline, the Pythagoreans presented the two contraries (opposites), Limited and Unlimited, as ultimate principles, or truths. Numerical oddness and evenness are equated with Limited and Unlimited, as are one and plurality (many), right and left, male and female, motionlessness and movement, straight and crooked, light and darkness, and good and bad. It is not clear whether an ultimate One, or Monad, was presented as the cause of the two categories.

The Pythagoreans, as a result of their religious beliefs and careful study of mathematics, developed a cosmology (dealing with the structures of the universe) which differed in some important respects from the world views at the time, the most important of which was their view of the Earth as a sphere which circled the center of the universe. It is not known how much of this theory was credited to Pythagoras himself.

The mathematical knowledge carried out by Pythagoras and his followers would have been enough to make him an important figure in the history of Western thought. However, his religious sect and the self-discipline and dedication which he taught, embracing as it did a vast number of ancient beliefs, make him one of the great teachers of religion in the ancient Greek world.

I have a comment;
Lately, I've been assigned some homework to research Pythagoras. So I went to this website, read the entire article, and found nothing on how the Pythagorean Theorem came about, or who the first was to think about this. It's just a tiny recommendment that it will help if you add more info to your article.
2
bella

HI THIS IS PERFECT FOR MY ASSINMENT THANK YOU VERY MUCH . IT IS REALLY INTERSETING